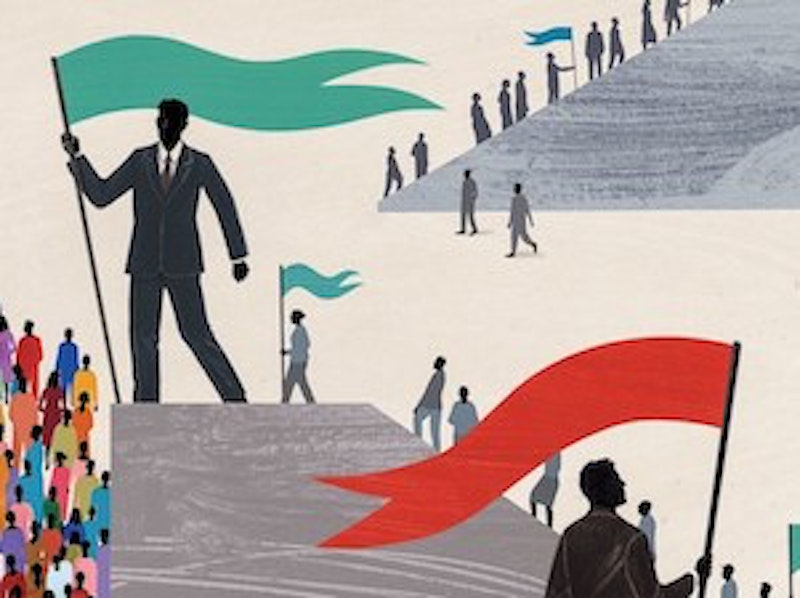 Thirty years ago, as world communism seemed to disintegrate, Francis Fukuyama famously declared the end of history. Working (sort of) from Hegel, Fukuyama regarded the long cold war between capitalism/liberal democracy and Marxist communism as the dialectic taking us to a new, enduring synthesis. Or really, he just found a quasi-complex way of saying that "the West" had won and that it was likely that a classical-liberal hodgepodge of free markets and free elections would dominate the future. He also kept hinting that the sort of economic and political systems characteristic of the U.S. and western Europe at that time were the best that humans, or at least he, could imagine.

The 1989 end of history got an inordinate amount of attention, but Fukuyama's picture of history was implausible from the ground up. History may well be ending, a terminal form of human government emerging, but definitely not in the way Fukuyama imagined.

The basic problem with Fukuyama's analysis, and a basic problem with the way people narrate 20th and 21st-century political history, is that they believe what people say about their own ideologies. They believe that socialism and capitalism are or were opposed to one another, for example. But the key to understanding where we are and where we're going is that these forces are in collaboration. Alexandria Ocasio-Cortez socialism and Donald Trump go-go capitalism are nice complements. The bogus concepts and anti-empirical horseshit at the heart of left-right spectrum have led Fukuyama (who's just published a new book on identity politics), and indeed most historians, to ignore what's blossomed right under their noses.

I think that China provides the model of where we're all headed. The state entirely dominates the economy, and operates it on a consciously capitalist basis; that is, its first priority is profit-maximization. This is the direction of large parts of the world, from the early-20th century to this moment, and state and capital are merged in slightly different configurations all over: in Egypt and Iran, for example, in the European Union and Venezuela, in North Korea and Myanmar, in China and the U.S. There’s no point in calling any of these systems socialist, or capitalist. That whole opposition rests on the idea that state and economic power are distinct and opposed. But they're not.

It's not at all crazy to think of the U.S. right now as a socialist country. The government controls about half the economy. Nor is it crazy to think of China as a capitalist economy. But what would be less crazy than either would be just to dump the terms and their opposition to one another entirely, because they never had any empirical basis at all. They were attempts by ideologues to manipulate their audiences, not attempts by historians or social scientists to describe reality. That the state controls the means of production doesn’t mean that “the public” does. It doesn't mean that people and institutions are not making huge profits. It doesn't mean greater equality or the end of class.

The rise of capitalism coincides with and depends entirely on the emergence of the modern nation-state. Even Adam Smith was clear on that. In the early American republic, capitalists such as Alexander Hamilton were the supporters of a large, active government, which they saw as essential to commerce: in currency regulation, import/export restrictions, regulation of credit, the use of military force to open markets or preserve markets, and the creation of infrastructure enabling commerce, among other things. The robber barons of the 19th and early-20th centuries didn’t engage in laissez-faire, free-market activities: they established monopolies by taking control of governments. Likewise, the communist revolutions of the 20th century put capital in the hands of the state, with the entirely predictable result of creating miserable oppression and extreme class stratification. The Communist Party of China (as in the Soviet Union and elsewhere) is a profit-generating machine, and a hegemonic social class.

Since the 1980s, Western politics seems to swing between rightist austerity programs to reduce (the rate of the growth of) government and leftist activism designed to enhance welfare and other social programs. But because economic and political power are interwoven throughout the world, both right and left are driving in precisely the same direction. Or if one side is pushing a huge military and another huge social programs, they are hence collaborating on increasing the scope of state resources and power, which is also the power of capital. Trump, as usual, has an eccentric relation to all these developments. But one thing we can say for sure: he’s an enthusiast for using government power to enhance the capitalist economy. And he's no deficit hawk.

As we roll toward our capitalist/socialist future, it’s worth remarking, while one still can, that it’s going to be oppressive in an unprecedented manner and on an unprecedented scale, which is saying something. The full merger of state and capital operates powers that couldn’t have previously been envisioned: the total surveillance and groveling conformity imposed on the citizens of China shows the direction. Here in the U.S., I’d be alert for state regulation of and regulatory capture by giant Internet companies, or a full merger of the United States government with Google. At that point, resistance will be useless.

From the outset, then, and certainly right now, the opposition of state and capital is a delusion reinforced by both the right and the left for their own manipulative reasons. It keeps people from seeing what’s staring them in the face. Fukuyama described the ideological end of an ideological history, or the fictional end of a fictional history. The real end of real history is proving to be a lot less groovy.