Gillibrand is my provisional first choice at this point. 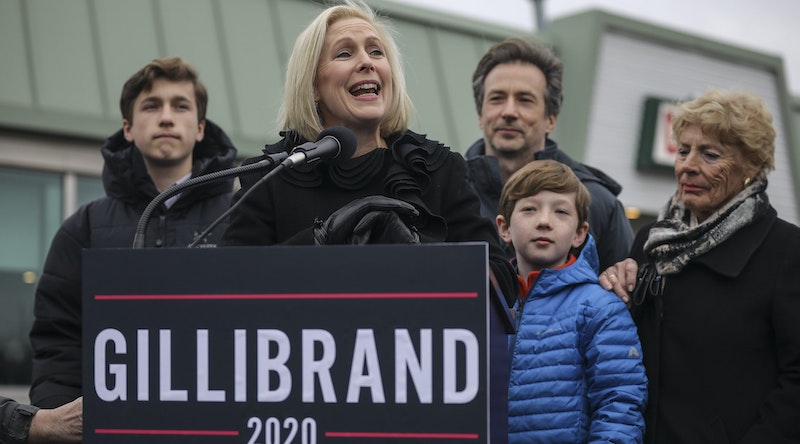 New York Sen. Kirsten Gillibrand officially announced she's running for president. I'm pleased. There are other candidates I'd be happy to vote for, but Gillibrand is my provisional first choice at this point.

The main argument in favor of Gillibrand, for me, is that she's shown courage in confronting sexual abuse and harassment, at real political cost.

Gillibrand's signature issue has been working against sexual abuse in the military. After a series of women came forward to accuse Al Franken of harassing them, Gillibrand was the first Senator to call for his resignation.

That choice has reportedly damaged her with Democratic donors and some voters. Franken dead-enders ignore the fact that his polling had collapsed, and that many senators (including minority leader Chuck Schumer) wanted him to go. No one forced Franken out; he chose to resign. Still, Gillibrand's well-versed in the dynamics of harassment and abuse; she had to know that she was making herself a target. But she did the right thing anyway.

It's not just Franken either. Gillibrand publicly stated that Bill Clinton should’ve resigned over his affair with Monica Lewinsky. She's right; when powerful leaders sleep with their employees, it's an abuse of power—and that's not even getting into the numerous women who’ve accused Clinton of rape and sexual assault.

Bill Clinton's a poisonous figure, and the Democratic Party should’ve ostracized him long ago. But few are willing to say so, because he has great power and influence in the Democratic establishment. Sure enough, Gillibrand was attacked by Clinton loyalists. The odious former Clinton aide Philippe Reines accused her of ingratitude, called her a hypocrite, and sneered, "Interesting strategy for 2020 primaries. Best of luck."

It would’ve been much safer for Gillibrand to keep her mouth shut. Instead, she chose to confront the powerful, whatever the consequences for her own ambitions. That's a rare quality in a politician. And after Donald Trump and Brett Kavanaugh, we desperately need someone in the White House who refuses to tolerate a culture of abuse.

I also like Gillibrand's record on other issues. She has the most anti-Trump voting record in the Senate, according to 538, edging out Bernie Sanders. She's put forward a number of innovative policy proposals. She wants to provide universal childcare and end cash bail, both of which I’d love to see enacted. She's also talked about a universal jobs guarantee. And, like virtually all the Democratic presidential contenders, she supports a Medicare for All program.

Gillibrand is sometimes accused of inconsistency or opportunism. She had a centrist voting record when she represented upstate New York, and only became a solid progressive when she moved to the Senate.

But all politicians reposition themselves in line with constituent wishes over time. Elizabeth Warren used to be a Republican; Sanders' gun control record is lousy; Beto O’Rourke’s voting record in the House was also mixed. Gillibrand's past compromises aren’t worse than those, and positively benign in comparison to Kamala Harris' ugly record on criminal justice issues as California AG, or Joe Biden's conduct in the Clarence Thomas hearings.

Gillibrand isn't well known, and I'm sure critics will say she doesn't have national appeal or isn't electable. But as long as Trump's approval stays mired in the low 40s, I think any reasonable Democrat will do well against him.

Whether Gillibrand can win the nomination is questionable. It's a crowded field, and Warren, Harris, Biden, Sanders, and Beto all look better positioned than her at the moment. But I'm glad she'll get the chance to make her case.