A Wall Around the World 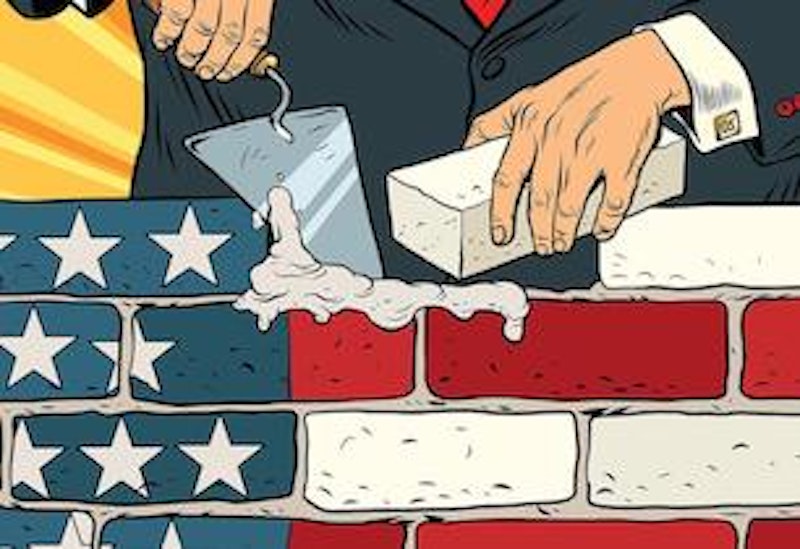 Trump’s Wall gets a lot of its intuitive appeal (to some people) from the vague idea that bad things tend to happen in one location and good things in another. If we can keep ’em separated, the good place will be better off.

But how can one survey the insanity and horror in our world, including in this nation, and think that Mexico is all that special? This week alone brings the 100th anniversary of the Molasses Flood in Boston, when the collapse of a molasses storage facility killed 21, and the centenary of the start of Prohibition, the failed attempt to ban alcohol that led to constant battles between speakeasy-supplying gangsters and feds. Next week is the 100th anniversary of the start of the League of Nations, then-president Woodrow Wilson’s failed attempt to unify the world, which merely paved the way for an even bloodier second world war.

Our world is disaster and savagery in all directions at all times, not just to the south, and not just today. The Wall can’t really save you from that chaos. If the longest-ever government shutdown continues, as it should, and Trump doesn’t get his Wall, the Wall’s absence may spare us the embarrassment of pretending the land north of the border is an oasis of peace and prosperity.

I’m not saying Trump’s Wall is a Hitler-like scheme—much more Soviet or East German, really. I do say it plays into the hands of the world’s roughly 200 collectivist crime organizations, called national governments, who love nothing better than to pretend they get to say who goes where and does what when. But why should freedom-lovers care which direction people are moving, so long as they don’t linger on private property without permission? Why should we care which government falsely claims to be in charge in each locale? That thinking is for commies and fascists—as is thinking it’s just fine to keep legal applicants for immigration mired in bureaucracy for decades in some cases, trying to get in. No wonder people seek sneakier routes.

Once we’ve dispensed with the nonsensical idea that governments should have a say in where you go on the Earth’s surface, the really vexing question is whether any place is worth going.

Seattle looks pretty civilized by global standards, but it’s the kind of place so left-wing that even its Fox affiliate, Q13, ended up having to fire a video editor who used Deepfake technology to make a news clip of Trump look more alarmingly orange and made him appear to lick his lips repeatedly in a moronic fashion.

Paris’ rioting Yellow Vest protestors are the new darlings of the anti-globalist populists, but even a cursory look at the Yellow Vests’ demands shows these are not freedom-lovers, just typical French whiners. They want taxes capped, sure, great, but that one mildly libertarian request is followed by dozens of calls for price controls, social spending, and—yes—more restrictions on immigration. Non, merci.

One thing’s for sure: No matter where you go on the planet’s surface, you’ll find anti-freedom political factions, all of them horrible. The current populists (and before them the paleoconservatives and even some paleolibertarians) love border patrols, even when they stop innocent people fleeing from war zones. The neoconservatives and lately their establishment-liberal enablers love creating war zones. The foreign governments embroiled in those wars, make no mistake, love bossing around and sometimes killing their own people. Meanwhile, the left sets its sights more stealthily on regulating 100,000 smaller things about your life (even while being aggressively indifferent to the culture that created you). All of these factions should cease to exist—and no one should stop you fleeing across the planet to get away from them, if you can.

I wouldn’t assume taking a “global perspective” on things tends to make people more moral, either, though, nor that non-human nature offers some sort of redemption. I notice an Emmy-nominated University of Minnesota professor who’s a fellow of the Royal Canadian Geographic Society and prominent climate change expert was just arrested for attempting to strangle his wife in front of cops.

I can understand that sort of thing inspiring people to attend a Women’s March—but don’t bring your Israeli friends if you want to keep some of the pro-Palestinian march organizers happy, and don’t try joining the Eureka, California march, which was canceled because the organizers feared the participants would mostly be white people.

Meanwhile, The New York Times drafts an apology for offending the Chinese government, Netflix yanks an episode of a comedy series that offended the Saudi government, and the U.S. media freaks out but only because the nixed comedy episode defended defense-establishment-beloved murder victim Khashoggi—though the media are routinely silent when Saudi Arabia censors or kills everyone else in sight. The Saudis even censored Wonder Woman comics (outfit too skimpy) among U.S. troops while those troops were defending the Saudis from Iraq. That’s wrong on more levels than I can count.

The truth is, once we get in the habit of trying to control what people think or do, and where they go, you know damn well it won’t be just the right squashing the left or just the left squashing the right, or one religion squashing the others, but everyone being attacked from all sides, all the time. You can now be stopped on the street in Germany and asked by police to demonstrate that you’re not part of the far-right if you have braids, since those look overly rustic and traditional. The answer to such impositions is not to start grilling leftists or Muslims in the same fashion, though. Everyone will just have their own favorite target for stopping, frisking, and generally harassing.

And I’m well aware that it’s not just governments that engage in violence and oppression. In the UK, the BBC just tweeted and deleted the suggestion that we should debate whether “honor killings” are acceptable. “Tolerance” is beginning to mean taking a fresh look at decentralized, traditional, non-European murder in some people’s minds. But just protect every individual from violence or fraud by every other individual and you don’t need to worry about which tribe started it or who lives where.

Meanwhile, back at the southern border of the U.S., CBS tweets and deletes the grim stats about all the rapes there, apparently deciding at the last minute that noting the rapes might play into their enemy Trump’s hands—though if pro-immigration forces had any brains, they should be able to use the rapes as an argument for fully legalizing immigration and thus removing the power of human-smugglers and “coyotes,” as they would be unnecessary and no longer in a position to do the raping. Likewise, if it’s the drug-war deaths that bother you, legalize drugs so there’s no profit in running the gangs and cartels.

But of course no one cares about those problems enough to seek cheap, pro-freedom solutions—only enough to dream simple-mindedly of the Wall or almost as simple-mindedly of law-abiding immigrants who bring no crime or welfare burdens with them worth hearing about and thus probably deserve free college tuition.

The behavior of the press is so bad, in fact, that you can easily understand how populists end up thinking that whatever the press opposes must be good. Take that national CNN team that refused to hear a local San Diego station’s reports of the Wall working. Populism is b.s., to be sure, but liberalism is a lie. Both those harsh judgments can be true at the same time.

Speaking of harsh judgments, it appears one thing Latinos have in common across ideological divides is a love of the vicious comic book antihero Rorschach, since Ted Cruz called him one of his five favorite comics characters and Rorschach was also just quoted on Twitter by Alexandria Ocasio-Cortez, who echoes him in suggesting she’s not trapped in Congress, Congress is trapped in here with her. I’m reminded, oddly enough, of Ron Paul’s denunciation of Trump’s Wall scheme: He observed that walls built by government to keep others out might also end up being used to keep us penned in. (Recall East Germany, noted above.)

If people on the move in search of freedom make it a bit farther north than D.C., all the way to New York City, they’ll find communism here just like back home in Venezuela. Mayor de Blasio says there’s "plenty of money" here but “it’s in the wrong hands,” and so his hands will relieve you of those ill-gotten gains, of course, as it was in communist Cuba where he went for his honeymoon decades ago. Apparently, despite the solidarity with black and brown people he meant to show on that trip, his city government is especially likely to seize your apartment building if you're black or brown, declaring your building "distressed" at a rate of about 40 complexes per year. That sort of heavy-handedness may help explain New York being the state that lost the most population last year for a second year in a row.

But if government’s crushing you, it doesn’t much matter whether it pretends to be inspired by Marx, FDR, or Pinochet. You still get squished. Better to stop pretending that good behavior can be reliably attributed to any particular tribe or national government and keep everyone’s hands off everyone else’s body and property.

In the meantime, while people fume over the southern border, Mexicans must envy the much more sedate debate up north over just plain giving part of Minnesota to Canada. Treat each other politely enough, everywhere, and it ceases to matter on which side of government’s imaginary lines you are. May we live to see the day when people talk about where borders used to be the way tour guides now say, “You’re standing on a site the ancients thought had magical powers, you know. They constantly built piles of their enemies’ skulls but believed this was a place of peace.”