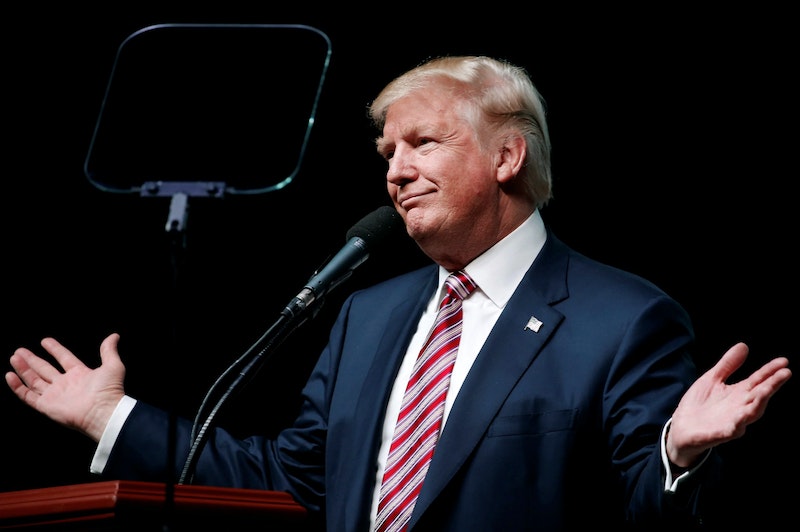 “You know, I think I’m better off maybe without their support, if you want to know the truth,” Donald Trump says. “You might be,” allows Bill O’Reilly, not much interested. He’s just trying to get Trump to shut up—O’Reilly has a question. The two men are talking about Paul Ryan, John McCain and so on. The Republican officeholders who’ve backed off from Trump because of the pussy tape.

O’Reilly’s question is literal-minded. Trump said via tweet that the shackles were off. What shackles? What had Trump been kept from doing? Possibly the host wants to identify the fault lines between Trump and the other Republicans. But he settles into a discussion of whether or not Trump is outspoken. Trump says he isn’t. “I went to Ivy League Schools,” Trump says. O’Reilly breaks in. “So did I,” he says, “and look at the big mouth on me.” Trump: “I know, and look, and look how we turned out. And I think Paul Ryan—” He’s back on Paul Ryan.

Trump announces that he doesn’t want Ryan’s support. “You know, if he calls now and wants—this happens all the time,” Trump says. “If you sneeze, he calls up and announces, ‘Isn’t that a terrible thing.’ So look. I don’t want his support, I don’t care about his support.” The renunciation seems emphatic but by the way. Trump blurts it in the course of blurting many other things. In the old days, politicians gave interviews during which they unveiled positions. Trump has a conversation with his pal and vents until the Republican Party has been split in two.

O’Reilly takes little notice. His aim isn’t to dig out news, or even to spin a line. He just wants to be the smart one while Trump’s being the dizzy one. His mind back on the pussy tape, O’Reilly announces, “I want to see what your forward strategy is.” Trump’s mouth is still running, but O’Reilly continues. “So let’s start with risk assessment,” he says. “Have you assessed how you’re going to win back women who were offended by the recent exposition from Access Hollywood? Have you a plan for getting those women back?”

“Well, first of all, locker room talk,” Trump says. “I’ve had a lot of women come up to me and say, ‘Boy, I’ve heard that and I’ve heard a lot worse than that over my life.’ If that’s why I’m going to lose an election to get rid of ISIS and to create strong borders—” He continues for half a minute. During this he says, “Or as I call her Crooked Hillary, which is what she is,” and a little later he winds up. “They’re tired of Obama and they’re tired of Clinton,” he says.

“We already have one,” Trump says. O’Reilly’s skeptical eyebrow hangs, surprised. “We have a great commercial that went out today,” Trump says, and without pause he adds, “I’m in Dallas, Texas. I’m flying to Panama City, Florida, in just a little while as soon as I’m finished with this, and we’re doing a speech and I have thousands and thousands of people.” O’Reilly looks unimpressed. He’s heard this before. (The ad isn’t targeted at women. It hits Hillary Clinton as being weak, as being a coughing, fumbling sad sack who might fall over dead. The campaign’s releasing the ad two days after Trump told the 60 million people watching the second debate that Hillary’s a fighter who never gives up.)

“But one thing I’ll say about you,” Trump says. “You agree that I’m being treated very unfairly.”

“In some cases you have been,” O’Reilly says. “But in some cases you’ve been too sensitive.” Then he continues, voice louder, “Um, but if you are treated unfairly—and we do have a Talking Points Memo tomorrow that will prove some of that, um, and you’ll be very interested to see what we’ve come up with.” Trump tilts his massive head and possibly twitches a shoulder; he’s willing to accept O’Reilly’s thought.

“But let’s again,” O’Reilly says. “Women, women are the key to this. You’re winning with men. All right, and I think you will continue to win with men. But women—”

“Do you have any plan to speak to women directly or to target them with ads or anything like that?”

Trump says there’s Ivanka and her child-care plan, and the border and law and order and letting the police do their job, because women are like anyone, they want security. Look at ISIS, how Hillary let it run wild.

O’Reilly, playing the sensible one, decides to curb Trump on that point. O’Reilly insists that blame really goes to Obama, because he was the boss. Trump flares. “No,” he says. “It’s also on her. She was secretary of state.”

“When you’re president you’re going to tell your secretary of state what to do, and they’re going to do it or they’ll get fired,” O’Reilly says. He seems a little tired of this.