By taking the color out of her clothes, she suppresses her personality. 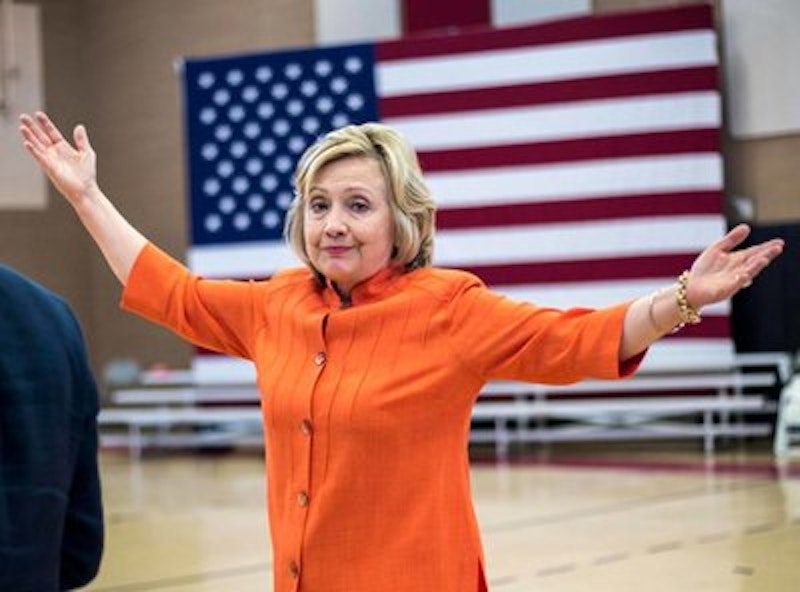 Hillary Clinton’s pantsuit is her signature fashion statement. I remember in her younger days she preferred the softer pastels, and then progressed to the bold, brighter colors of citrus yellow and grape and turquoise. She was often seen with a string of pearls around her neck, channeling Barbara Bush.

When the presidential campaign began, she opted for a stern uniform of black, white and gray. I wish I could find out who is choosing these awful outfits. Every time she walks in front of the camera her ensemble reminds me of Kim Jong-un. They both have the Sgt. Pepper look, a mandarin jacket paired with matching pants.

I appreciate Hillary’s ability to reflect her seriousness through her clothing, but by taking the color out, she suppresses her personality too. She did forego her Kim Jong-un look for the last presidential debate, choosing instead a black and white tuxedo-looking getup.

Hillary has open declarations of support from the fashion world including pal Anna Wintour. Designers like Marc Jacobs and Tory Burch both appeared at their shows wearing haute couture Hillary Clinton t-shirts. Couldn’t they give her some fashion tips?

I’ll probably be called sexist for expecting Hillary to change her wardrobe. I understand that men in politics get a free pass. Just look at disheveled Bernie Sanders. It seems women have to wear heels, find fashionable yet age appropriate clothes, and support the American designers.

Yet Hillary, no newcomer to criticism, knows how to go with the flow. Her first Instagram post of the campaign was a perfect example. She posted the phrase “hard choices” under a red, white and blue pantsuit array. I visited her website this week for the first time to see what kind of swag she offered and was humored by two “pantsuit” t-shirts for sale.