The Man With the Trump Cutout

Love comes in many forms. 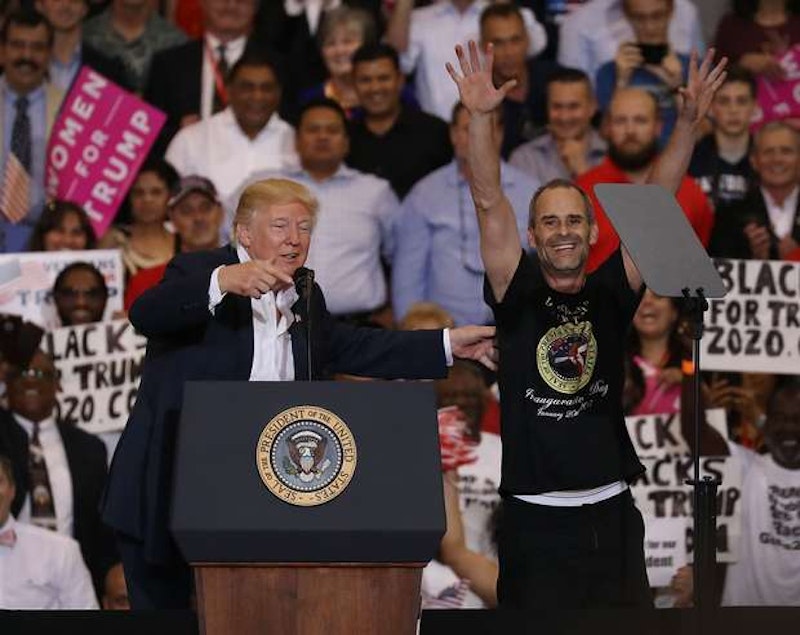 His cheeks have caved in and his hairline looks like grizzle. His face seems determined to become nothing but stubble and eye hollow. He might be the laid-off mechanic who’s arrested 15 minutes into Law & Order. They cut him loose because there’s nothing to hold him on. He’s a harmless goof who makes tea from fish food and that’s why he was at the pet store right before the pretty girl got whacked. The real-life scary man has his own endearing habit. As he tells CNN: “I got a six-foot cardboard box of President Trump in my house and I salute that every day, and I pray, and I tell him ‘Mr. President, I pray for your safety today.’ And I’m not lying, I do that every single day to the President that is cardboard.”

At this point his head hops. It lurches up and to his left, and a slim but healthy smile twitches onto his face. “Ha ha ha ha-ha,” he laughs, or says. He’s strange but he seems nice. Like Mike Huckabee if Huck had been confined to an elevator for a few weeks but his button eyes had kept their shine.

The CNN woman has her own style of weirdness. Hers is the sort where convention becomes rococo and nobody notices. What I mean is that her hair style was drawn by Jack Kirby. Two fat blades meet three or four inches under her chin. The two arcs and the crest of hair slanting along her forehead together create a wheat-colored frame the shape of an egg. From this space her features look out: wide eyes, firm cheekbones, upholstered lips. Eyes and lips are registering the stoic impassivity of a CSPAN moderator. But no, he just said “pray.” The interviewer’s eyelids yank themselves dramatically higher. Now she has the impassivity of someone who smells a remarkable fart, which is a different sort of impassivity. The man continues regardless. A key point: the man said “pray for” and not “pray to.” Reporting to Cardboard Trump is bad, perhaps especially when the topic is your prayers. But praying to Cardboard Trump would be far worse.

The man’s being interviewed because Trump called him up on stage during last Saturday’s rally in Melbourne, FL. “You!” Trump said, pointing straight over his podium. “I just saw him on television. He said, ‘I love Trump, let Trump do what he has to do.’” Pointing again, again straight over the podium: “That’s my guy, right there.” This was followed by the man’s coming up on stage. Puppylike, the man surged toward Trump and gave him a hug, then stood apart to fling his arms high. Doing so, he revealed what appeared to be a white band of underwear between his black jeans (cut off at the knees) and his black t-shirt. He placed a hand to his heart and swiveled his head, as if he’d fan himself if he could. He beamed.

Trump then gave him the podium. “When President Trump, during the election, promised all these things he was going to do for us,” the man said, “I knew he was going to do this for us.” He nodded at his own words. On leaving the stage, he blew kisses, then teetered on one foot as Trump called him back for a handshake.

Wise heads say the incident was a set-up, and that seems likely. But the man’s devotion is real. “May I say one thing?” he asked the CNN lady. From within her hair, she answered, “Quickly.” The man said, “Let’s just be a little, little nicer to our president.” He’s a nut but I like him. Not Trump, the man. Trump’s just a nut.