The right says, “Our god tells us to love and serve everyone... except you people.” 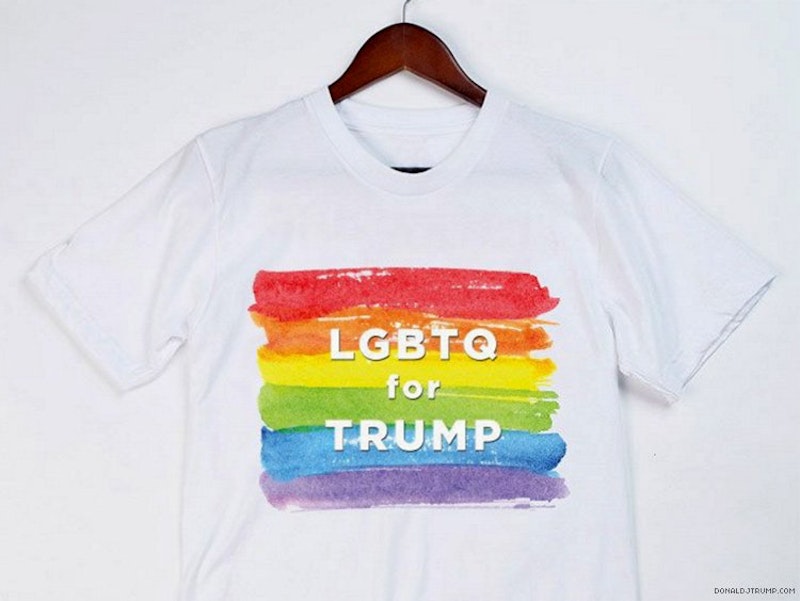 Last week the Trump campaign unveiled a new line of “LGBTQ for Trump” t-shirts to coincide with Pride Month. It didn’t go well. Several LGBTQ organizations, activists, and commentators immediately criticized Trump’s hypocrisy for profiting off of the same fight for equality that he’s been fighting against. “The same @realDonaldTrump who won't name June Pride Month,” tweeted Tracy E. Gilchrist of the Advocate, “whose White House wants to discriminate against homeless trans ppl, and who is fine with businesses refusing to serve LGBTQ people is selling Pride tees. This is not a fever dream.”

When Trump pledged to “do everything in my power to protect our LGBTQ citizens from the violence and oppression of a hateful foreign ideology,” he meant specifically Islam. Trump is hardly pious, but he wants to keep his conservative evangelical Christian fanbase happy, so his presidency so far has been a non-stop avalanche of rollbacks for LGBTQ protections that Barack Obama put into place.

Last week, the House of Urban Development issued a new proposal that would allow homeless shelters to turn away trans people. Under this new rule, “single-sex or sex-segregated” shelters would be able create policies about who they allow based on factors such as “privacy, safety, practical concerns, [and] religious beliefs,” among others. In other words, shelters can turn away trans people because either their god doesn’t like or they believe trans women aren’t “real women.”

A few months ago I blogged about state-funded faith-based adoption agencies turning away LGBTQ people, and wondered how the government could fund faith-based organizations in the first place. Alison Gill of American Atheists contacted me and explained that the government can fund faith-based agencies as long as they perform secular services and don’t turn away anyone. “They want to basically take state and federal funding and be allowed to discriminate with it,” she said. This is exactly what the new HUD proposal is about: allowing government-funded institutions discriminate against LGBTQ people—particularly trans people in this case—in the name of “religious freedom.” They’re saying, “Our god tells us to love and serve everyone... except you people.”

Some argue that cis women traumatized by abuse may be triggered from close proximity to someone with a penis. I understand that. However, like with the bathroom bill debate, there’s no evidence of a wide epidemic of trans women assaulting cis women in shelters. Also, what if there are no alternative shelters in the area? Where could trans women go? Maybe there’s a middle ground, but since nearly one-third of trans people experience homelessness some time in their lives, this new proposal will cause more harm than good in the end.

Just a day after HUD’s proposal came out, the Department of Health and Human Services issued a proposal that would roll back protections for trans people under the Affordable Care Act. With this new policy, “sex” would no longer include gender identity, so doctors can refuse to perform gender affirmation surgery and insurance companies can refuse coverage for medical transitioning. This proposal, according to the New York Times, “would fit into a broader agenda pushed by religious activists” to attack LGBTQ rights.

According to the Williams Institute, this policy, if it goes into effect, will have a negative impact on over a million trans adults and 150,000 trans teens. “Explicit gender identity protections were adopted in response to an overwhelming record of anti-transgender discrimination and barriers to health care and health coverage,” Williams Institute Executive Director Jocelyn Samuels told the Advocate.

Trans people already face countless hurdles in order to receive proper medical care. According to the 2015 US Transgender Survey from the National Center for Transgender Equality, 55 percent of trans people reported being denied insurance coverage for gender affirmation surgery, 33 percent reported not seeing any health care providers due to costs, and low-income trans people are less likely to medically transition than high-income. “A reversal of these protections would be contrary to numerous court decisions and any fair reading of the statute and would seriously endanger the health and well-being of an especially vulnerable population,” says Samuels.

Trump hasn’t publicly acknowledged Pride Month throughout his presidency, and it’s obvious to see why. His pockets are filled with white evangelical money, so he does whatever the Religious Right tells him to do. Even when he tries to show us he’s on our side—like the “LGBTQ for Trump” t-shirts—it’s a fig leaf. We don’t need t-shirts, President Trump. We need equality.