Woke from a Dream 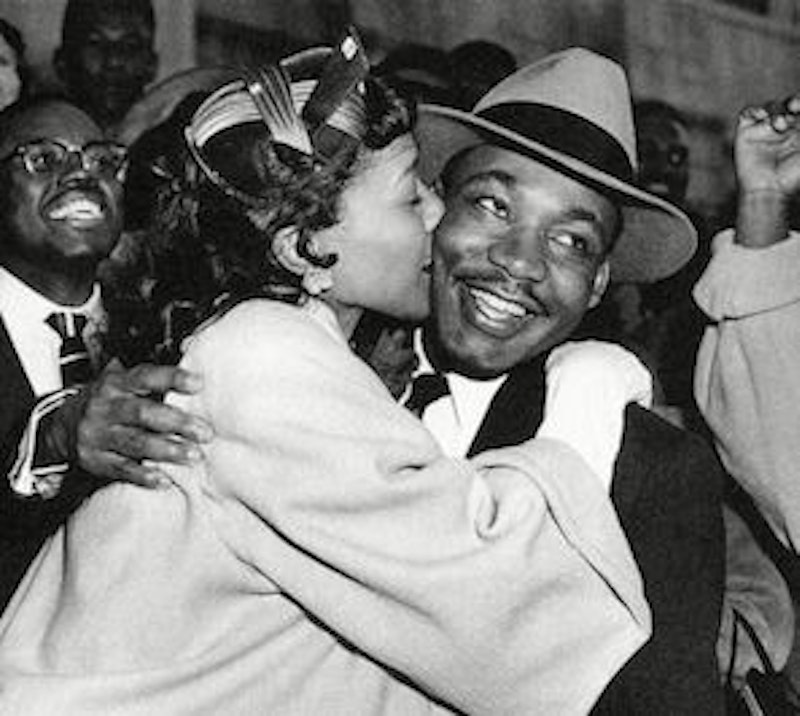 Martin Luther King laughed as a friend of his, a fellow minister, raped a woman right in front of King, according to a report due out this week based on extensive FBI surveillance files. The researcher who compiled the information is reportedly a Democratic Socialists of America member, too, not some right-wing fabulist.

I can’t imagine the present-day left reacting to this revelation in a coherent fashion. They may laugh off the revelation that King had some 40 mistresses as evidence that he was a forward-thinking de facto polyamorist, but they can’t laugh off rape, not as easily as King himself apparently could. The respectable center-left will likely find a way to jiu-jitsu the revelation into another attempted blow against the right wing, though.

Even the most revered left-wing figures are tainted by the evil patriarchy, they’ll say, and so, as they always conclude nowadays, we must continue on our push leftward. That almost sounds convincing—and I’m certainly not suggesting, as some leftists will no doubt pretend I am, that such revelations mean that every idea ever presented under the banner of the left should now be rejected, including King’s highly valuable call for racial tolerance.

If you really want to find something “right-wing” to blame in all this, though, I suggest picking religion.

I’m not saying King’s Christianity inspired him to be a philanderer or an aider and abettor of rape. I don’t doubt that many people have in fact been constrained by fear of God from committing such crimes. Even the purported sexism of Christianity looks as if it’s been exaggerated when you compare it to other ancient creeds. I’m thinking more about the negative effects religiosity of all stripes, including very secular forms of religiosity, can have on the minds of people such as King idolizers.

Turn any mere man into a myth and you’re asking for brutal disillusionment farther down the road.

So what does discarding illusions, dispelling mere “dreams,” and getting serious, pragmatic, and no-nonsense about politics mean in this case? Given the recent uncompromising tone of the left on race in particular, my bet would be that some on the far left (not necessarily the aforementioned center-left) will seize upon these new King revelations as an opportunity to say they were never that crazy about King in the first place. He was too moderate, too interested in dialogue with the oppressor, naïve in wanting the same moral rules for all individuals instead of skin-color-based group conflict.

Now’s the time to ditch that sellout rape-abettor and turn to the superior example of Malcolm X, they may say (as Spike Lee sometimes seems to suggest in interviews despite the carefully balanced tone of his racial drama Do the Right Thing).

That might at least be a more logically coherent response than suddenly lurching back to the 1960s view that you can’t trust anything the FBI says anyway. As a libertarian, I’d be happy to dispense with faith in the FBI (and nearly everything else), but it’d be tricky for the left to pull off that rhetorical swerve after they spent the past three years telling us the FBI is needed to rescue us from Trump.

I also don’t think the current left can easily do what most of us are going to do in response to the revelation, which is simply to say that historical figures are always a mixture of good and evil, that we should emulate the good parts and denounce the evil parts, then get on with our lives.

The left might’ve been capable of that sort of measured, selective thinking five or six years ago, but something changed—and it changed even before Trump got elected—that turned the left into a fanatical combination of purges, censorship, building-name-changes, pronoun-changes, statue-removals, and other urgent attempts at total purity. As Ross Douthat asked in his column on May 25th, how can the left of the MeToo-era possibly just overlook this stain on one of its heroes when it refuses to overlook anything these days, and specifically when it claims the moral authority to declare every deviation from left orthodoxy “white supremacism”?

I first knew the contemporary left was losing its mind about a year before Trump declared his 2016 presidential ambitions, when a left-wing but seemingly intelligent friend declared Seinfeld, Seinfeld fans such as me, and Vegas comedians all forms of white supremacism—not just rudeness or callousness or misguided humor, but full-on white supremacism. Can a left that fanatical pretend the MLK news just doesn’t matter? We’ll see.

Both the right and left have mythologizing tendencies, and a form of amnesia goes along with that mythologizing. The left may try to get you to forget the unpleasant things about MLK, just as the current far-right would be delighted if you’d perform the even more monumental feat of forgetting the centuries of violent, coercive white racism that produced and necessitated MLK. I’m against amnesia across the board. The warts-and-all approach makes fanaticism more difficult because we recall flaws everywhere, not just on “the other side.”

And I’m not for a moment trying to imply one rape is the moral equivalent of centuries of kidnapping, imprisonment, and torture—I’m suggesting the smaller crimes don’t get erased by the larger ones, just as one political party doing something stupid doesn’t turn the other party into geniuses. My greatest fear about the amnesiac-fanatic approach to race relations is that the thing most likely to be forgotten at this juncture in U.S. political history is the 50 years of drastic improvement in race relations through which we’ve just lived, with intermarriage and interracial dating, business relations, and civility all transformed for the better, serious ongoing problems notwithstanding.

The left would like you to believe the U.S. is white supremacist now, was white supremacist throughout the half-century of purported improvement that spanned my lifetime, and obviously was white supremacist before that period. The far right would now agree, except they’d say it’s a good thing. But spotting—even celebrating—a period of significant improvement is important. A doctor shouldn’t ignore two weeks of improving health in a client otherwise sick all year, not if he wants clues about how to foster further improvement.

And even if King were a corrupt man, his metaphorical patients (King was a doctor of theology, not medicine) should remember how much they’ve benefited from his advice. Dismiss it all, whether for right-wing or left-wing reasons, and we could end up having a relapse. Liberals will claim liberal institutions adapted to ameliorate the old racial-conflict ills (and thus tout further government measures), the left will say those ills never went away, and the right will claim America was great throughout and just took a bit longer than expected in addressing some minor technical problems such as Jim Crow.

But I think the truth is that individual hearts and minds really changed for the better during the past half-century, even if they were changed in part by a flawed man. Don’t let your current “woke” state cause you to forget all that, like a fading dream. There are some beautiful details here, in between the nightmarish parts, and we should focus on them.