Cathy Young's article sends him into a meltdown. 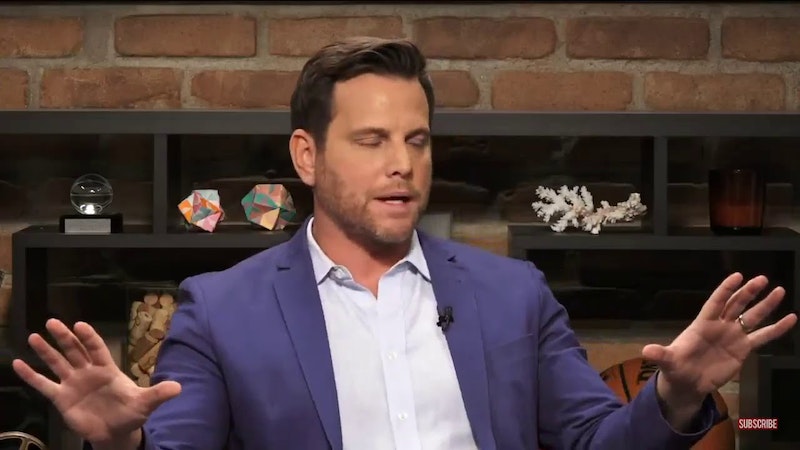 On Tuesday morning, Dave Rubin angrily took to Twitter. The tension that's bubbled below the surface between the host of The Rubin Report and writer Cathy Young finally erupted. What pushed Rubin over the edge was Young's latest Quillette piece, the second time in a little over a month that the publication that's normally a friend of the Intellectual Dark Web has hammered the guy who's been called "the host of the IDW." The Los Angeles-based podcast host responded with a temper tantrum.

Young wrote a comprehensive, trenchant analysis that offers useful pointers to Rubin and his fellow IDW culture warriors for avoiding tribalism. Perhaps the part-time standup comic started to get his hackles up when he read the part where she wrote that, although Rubin holds liberal positions on a number of issues, "He is currently aligned with Republicans and with the pro-Donald Trump camp."

Rubin doesn't like to talk about this, but it's true. Although he won't come out as a Trump supporter ("Trump curious" is about as far as he'll go), I'm not aware of even one critical statement he's ever made of Trump on his active Twitter account or his podcast. But he sure dishes it out to lefties. The former progressive often gives the impression he got red-pilled so hard that he resolved to make amends for a past he regrets. While it may have been a kick to show his former boss Cenk Uygur, left-wing host of The Young Turks, that he'd host a castaway like Milo Yiannopoulos on his show, he did it so many times with other sketchy guests that some of his supporters began to get queasy. Rubin's mentor, Larry King, interviewed actual Nazis and racists, but he never seemed so comfortable in their presence.

Rubin got agitated by Young writing that he has a troubling history of not standing against the identitarian/populist right, which she believes is a blind spot for other IDW luminaries as well. Among The Rubin Report's guests she mentions who are spreading this ideology is Stefan Molyneux, a notorious proponent of pseudoscientific claims that blacks are intellectually inferior to whites. During his Twitter tizzy on Tuesday, Rubin said he had no regrets about that interview, in which he offered not a single challenge to the Canadian crackpot. Molyneux is charismatic—he's often called a cult leader—and Rubin appeared to be in his thrall for that podcast.

Young cited a few more "egregious" instances from Rubin's podcast, and that was it. She got a few good jabs in, but he took it as a personal attack rather than a professional critique. For a charter member of the IDW, his comebacks weren't very intellectual.

What's the intellectual aspect of claiming that Young offered to pay her expenses when she went out to L.A. to appear on his show, or that she "begged" him to introduce her to other IDW members? That line of attack is Trumpian. Rubin tweeted angrily about Young going after his line of questioning with certain people who she used to be friends with but, once again, what's the relevance? I used to think the Knicks were still worth rooting for until I wised up.

Rubin thought it was relevant to point out that Art Tavana spent a whole day with him and then asked follow-up questions by phone in preparation for profiling him for Playboy, which he called "actual journalism." Cathy Young's article, however, wasn't about Rubin, but she should’ve spent time with him and then called him before devoting two paragraphs to him in a lengthy article? This prima donna talk just amplifies the impression that Rubin's getting histrionic over nothing.

Rubin never got beyond his fulminations to address Young's comments, which plenty of other people have echoed. Talking to people your political opponents won't engage with because they're "intolerant" doesn't by itself make you an unassailable free speech crusader. How you engage with certain people matters. If you're buddying up to those pushing bad ideas because you want political allies to fight the regressive leftists you despise, then get ready to take some heat.

What does Rubin think will happen when he says that Alex Jones employee Paul Joseph Watson, Pizzagate promoter Mike Cernovich, and Molyneux are part of the "new center"? Rubin's intentionally putting himself in the hot seat, but when he gets the inevitable pushback he can’t handle it. Score this round for Cathy Young.