They choose to ignore his point that Sweden's in trouble. 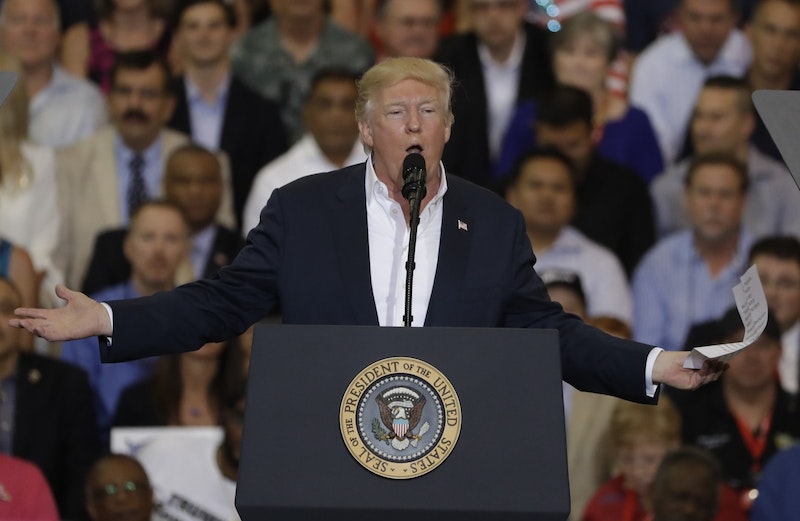 Donald Trump staged a rally in a Florida airport hangar on Saturday. On the topic of the dangers of immigration, he mentioned an incident that had just occurred the previous day in Sweden, except that it didn't happen. Trump gets lazy and careless with his words, and everyone knows what happened next.

Understanding what's going on in Sweden shouldn't be difficult today, but it's like trying to put a jigsaw puzzle together with many pieces missing. That's because this involves two polarizing political hot buttons—the Muslim and immigration issues. Breitbart et al. will tell you Sweden's the rape capital of Europe, and much of the mainstream media—not just the Huffington Post and Salon—says Sweden's a shrine to open borders and empathy. Left-leaning outlets mocked Trump and assured us Sweden's refugee situation is swell, while conservatives focused on Trump's intent and provided counter-narratives.

Sweden’s reality lies somewhere between the Breitbart and Salon versions, but you have to work to find it. In recent years, the Swedes have taken in more refugees per capita than any other European country. In 2015, more than 160,000 people arrived in Sweden seeking asylum, many of those from Iraq, Syria, and Afghanistan. This is in marked contrast to the 1970s, when most immigrants came from Finland, Yugoslavia, Denmark, and Greece, and found they were able to assimilate into Swedish society fairly painlessly. Currently, around 1.6 million residents of Sweden were born abroad, representing 16 percent of the population.

What Trump was actually referring to was Tucker Carlson's Fox News interview the previous evening with filmmaker Ami Horowitz, who’s recently been in Sweden documenting their refugee situation with his new film, Stockholm Syndrome. He said statistics show there's been a surge in violence connected with immigration in Sweden lately, but that the Swedish people still wanted to continue welcoming refugees.

Horowitz told a story about a party in Sweden where people called him a racist and Islamophobe when they learned of his work. He told Carlson the people at his hotel warned him not to take Uber. When he went to the suburb of Rinkeby, one of the no-go zones, several men beat him, which he recorded. When 60 Minutes Australia sent a crew to Rinkeby, someone tried to run one of them down in a car. They hadn't been there more than a minute. Later on, a street mob physically attacked them.

Liberals laugh when someone says there are Muslim no-go zones in Europe. They'll call you an Islamophobe. That's because their media won't report on them. According to 60 Minutes Australia, there are 55 no-go zones in Sweden. These are places that emergency services will not go to without police escort. CNN provided the standard mainstream media response to Trump’s gaffe, with a long article stating that everything's fine. The crime problem is limited to a few suburbs. CNN’s point, which the article explicitly spells out, was that criticism of the Swedish refugee policy is evidence of being anti-Islam and anti-immigration, as many Swedes believe as well. But the fact is that Sweden has now become an exporter of jihad. Authorities say 300 people have left Sweden to fight for ISIS. Their return to Sweden will produce a ticking time bomb. The mainstream media reminds you there isn't a terrorism problem in Sweden, but the seeds have been planted.

Comparing crime rates across countries isn’t simple. You have to be careful about looking at a chart and drawing a quick conclusion, as criminologists and statisticians know. The charts you'll see comparing Sweden’s rape reports to other counties are alarming, but left-leaning media explain that it's because Swedish women aren't afraid to report rapes and that their legal definition of rape is expansive. Certainly the rapes committed in the no-go zones aren't reported anywhere near the Swedish norm.

There have been reports that gangs of immigrants have been sexually assaulting females at Swedish music festivals, and that the police are covering it up. Groups of refugees from Afghanistan sexually assaulted females at the We Are Sthlm music festival in the summer of 2014, and police made arrests. Daily newspaper Dagens Nyheter learned this by obtaining internal police memos, but the official police report made no mention of this. Organizers of the event heard rumors of large groups of young men who surrounded and assaulted girls, a modus operandus reminiscent of the rampant Tahrir Square sex attacks in Cairo in 2013 after Mohamed Morsi had been ousted. Police in Malmö, Sweden have reported similar attacks occurring on New Year’s Eve.

So what’s the reality of Sweden's great social experiment? Swedish police don't categorize crime reports by immigration status, so their statistics aren't that helpful. Anyway, why would anyone trust the Swedish government to be open about it when their own police are covering it up? The government's too invested in its refugee policy to speak the truth, and many of their people don't want to hear it anyway. A couple of people Ami Horowitz interviewed said there was no limit to how many refugees Sweden can accept.

Sweden came late to this game. Take a look at France today: combining open borders with a welfare state is a disaster. The far-right nationalists are rising in Sweden now. The Sweden Democrat party is gaining momentum. You can become a victim to your own humanity, which Sweden is about to learn the hard way. The breaking point will sneak right up on them because they're in denial. By then, it will be too late. They’ll find that liberalism will have failed to provide for their security. Just two days after Trump's faux pas, riots broke out in Rinkeby. For four hours, people Sweden has welcomed so warmly burned cars and threw rocks at police, who'd apparently upset them by making an arrest. The future arrived in Sweden quickly.