Mock outrage over Trump bans is plea for attention (and revenue). 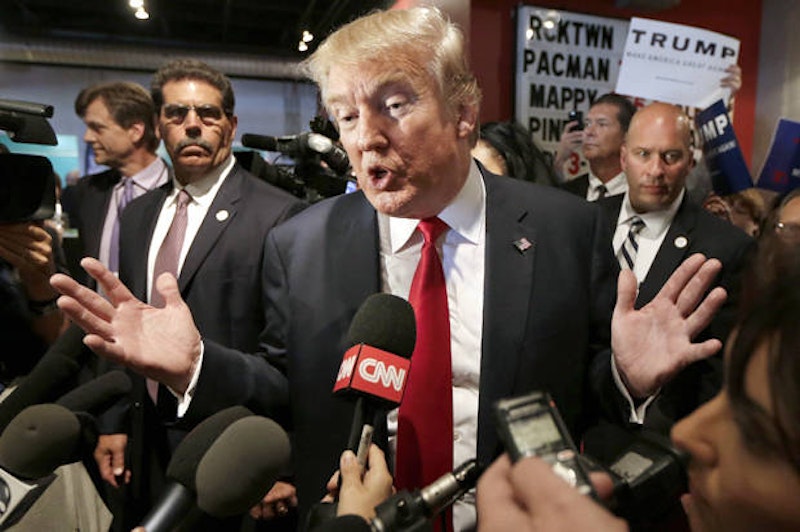 It’s early in Donald Trump’s term—probably his only one, although he’s shattered rational speculation—but I’d wish somebody would blow the two-minute whistle for halftime. The media’s doing its best to match Trump’s oily and constant self-aggrandizement, while social media would-be smart-alecks are making a federal case over the President’s alleged preference for well-done steaks. I’ll bet illegal immigrants in hiding all over the country are really concerned that Trump likes his meat with ketchup.

Someone I follow on Facebook, an accomplished professional who ought to know better, posted this dopey remark last week: “CNN, NY Times, LA Times, and Politico were blocked from the White House press briefing today. This is what a dictatorship looks like, people.” Really? Unless it was overwhelmed by the Warren Beatty/Faye Dunaway Oscars flub—a vital topic of conversation—I missed the news that even one of Trump’s press detractors had been jailed or that a media company had been shut down by the government. I suppose it was capricious of Trump to ban specific organizations from Sean Spicer’s illuminating press briefings, but this is hardly Woodrow Wilson territory when that self-righteous president actually did suspend the First Amendment during World War I.

Not only are warnings such as the one I cited above an insult to people who live under real dictatorships around the world, but also Trump, unwittingly, did a mitzvah for the media. It’s easy for members of the Washington bureaus of companies like The New York Times, CNN, and Politico to toddle over to Spicer’s gaggle, but why any boss would waste diminished staff on such useless exercises is beyond me. The ban probably won’t hold, but the media ought to run with it and just ignore the propaganda coming from the White House altogether. Same goes for reporters “covering” Trump’s volley of tweets, and then responding to him, as if he pays any attention. Better that media companies dispatch its reporters to various cities and towns where Trump’s policies are actually starting to have an effect. I don’t mean just “the heartland,” but the entire country: there are as many horror stories, or alternatively, positive developments, happening in New York, Boston, Los Angeles, and Houston, say, as rural hamlets in Iowa, Ohio, and Alabama.

I do like that the embarrassing White House Correspondents’ Dinner looks kaput, now that Trump says he won’t attend and publications like Vanity Fair and The New Yorker have pledged not to attend the incestuous gala that in previous years they reveled in (and give credit to The New York Times for shunning the dumb event for years now). I’ve long cringed at the self-congratulatory tone of the WHCD and figured it was time to call it off. The furrowed brows of holier-than-thou editors and publishers declaring their “fight” against Trump is hard to take, but the end result could be a happy one for the public.

There’s another common refrain among journalists today, reacting to Trump’s “dictatorship”: buy a subscription to a newspaper! Suits me—I still pay exorbitant home delivery charges for the Times and Wall Street Journal—but it’s quixotic, no matter how much the publicity flacks for media companies crow that Trump’s caused their readership to soar. Maybe, maybe not. If that were really true, we’d be reading about bulked-up hiring at the nation’s major newspapers, not layoffs and buyouts. We’d hear about the resurgence of print advertising revenue, not hard-to-quantify digital gains. Once again, especially for the pundits/reporters who don’t know the meaning of “dictatorship,” the print era is over. It’s a dead issue.