The Missouri Delegation: Standing Against Censorship

Two members of Congress defend and sue, while several colleagues join the censors. 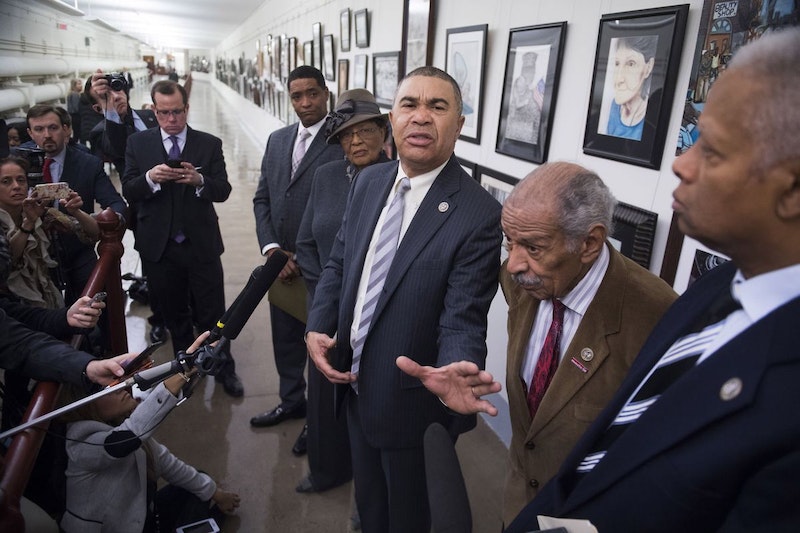 On August 9, 2003, a story in National Journal described a Washington trend: “On at least three occasions recently, members of Congress have offered themselves as thoughtful cartoon critics.”

That piece detailed how lawmakers lately had enthusiastically written letters to oppose or support several editorial cartoons. These scandalous images depicted: the mocking of an American activist killed after she was run over by a bulldozer in Gaza; President George W. Bush paving with dollar bills a bridge between Ariel Sharon and Yasir Arafat; and one panel in which Bush, drawn as the Mad magazine mascot Alfred E. Neuman, points a gun at himself. Two of these are by Pulitzer Prize winners. The Bush gun cartoon earned its creator, Michael Ramirez of The Los Angeles Times, a visit by the local Secret Service office.

I quote that 2003 piece, which I wrote, to show that, in light of a couple recent incidents, the Capitol Hill art critic instinct has a history. Both liberals and conservatives simply cannot resist. And media love to cover it.

This week, Rep. Lacy Clay (D-MO), filed a lawsuit in federal court full of entertaining claims, stemming from a single painting that has caused continued consternation in Washington since the beginning of the year. The painting is by a St. Louis high school student named David Pulphus. For half a year, it hung undisturbed in a passageway into the Capitol from the Cannon House Office Building, as part of an art competition. It depicts a police officer as a uniformed wart hog, aiming a pistol at a dark-colored wolf. The St. Louis arch looms in the background, signifying this is all about the 2014 Ferguson shooting of a black teenager by a white officer.

Over several weeks in January, several members of Congress, all Republicans, simply snatched the painting from the wall multiple times, each time helpfully dropping it off at Clay’s office. Clay would then re-hang the work. The media found out. The Hill covered each moment, but St. Louis media and conservative outlets joined in. House Speaker Paul Ryan called the work “disgusting.” “This is not a question of First Amendment rights,” he said. It certainly is, replied Clay, who seemed to enjoy the fight.

A pro-cop blog led the charge against the painting, even after a work representing the law enforcement “blue line” was tacked up immediately above the painting. Architect of the Capitol Stephen T. Ayers eventually removed the painting for good in mid-January, after determining it violated rules against art of a sensational nature or depicting political controversy.

Clay makes the case that the painting was reviewed and accepted like all the others in the competition, with no objection. He adds, in a press release: “David’s painting was wrongly disqualified and removed from the public exhibit at the direction of the Architect of the Capitol who shamefully chose to retroactively censor and suppress Mr. Pulphus’ artwork in response to the enormous political pressure he experienced from the Speaker of the House and certain right-wing media outlets.”

This is indisputably correct on every count.

But Clay then claims in the suit that he is “experiencing ongoing stress and anger over the retroactive and viewpoint-based exclusion of his district from the competition” and that his and his staffers’ time has been “diverted from important legislative responsibilities as a result” of the Architect of the Capitol’s decision, The Hill reports.

No word on whether the offending Republicans are counter-suing, as a result of their daring, not-so-undercover raids on the Congressional high school art show, claiming back injuries or perhaps insufficient access to OSHA-approved ladders. But one Republican Senator stood up to art censors recently. Curiously, he’s also from Missouri. The painting served as a backdrop during the traditional Inauguration Day luncheon in the Capitol. The one where President Trump asked for recognition of Hillary Clinton.

Executed in 1855, “Verdict of the People,” by Missourian George Caleb Bingham, depicts a small town reacting to the announcement of the outcome of an election, some with joy and others in despair. As the inauguration approached, an artist and an academic attracted more than 4000 signers to a Change.org petition to stop the display. The petition notes that since Trump received fewer popular votes that his opponent, the result is certainly not the “verdict of the people.” Trump did win Missouri by nearly 19 points.

In July, Sen. Roy Blunt, R-MO, asked if the painting, housed at the St. Louis Art Museum, could be displayed during the inauguration luncheon. Blunt chairs the Joint Congressional Committee on Inaugural Ceremonies. “Any decision to put a representative of your collection into a political situation makes a political statement," Ivy Cooper, one of the petition organizers, and a member of the faulty at Southern Illinois University, told the St. Louis Post-Dispatch. "If there were a discussion of the meaning of the painting, it would be different. But it's being used as a prop."

But Cooper makes no effort to lead that discussion. Her petition makes no reference to the content of the painting. That left The Washington Post’s Phillip Kennicott to provide a surprisingly intriguing tour through the fraught, pre-Civil War moment Bingham depicts. Kennicott, eventually, determines the painting to be a break from tradition for the luncheon, “a politically charged representation of one of the darkest moments in American history.” So that’s bad? Does the painting even work? Kennicott really never seems to decide. So a conservative senator is defending art, and a progressive critic waffles. Weird.

The painting stood in the Capitol for one day. No violent marches or Starbucks window smashings by black-masked art censors were reported.

These individual dust-ups attract way too much attention, relatively, but they speak to the censorious instinct of the country at large, in a time when claiming grievance has power as never before. A letter to Ryan from Clay and Rep. Jamie Raskin, D-MD, invokes Hustler magazine, Animal Farm, Antonin Scalia and William Brennan. “In America, we don’t arrest artwork,” the letter begins.

But, in America, of course we do. All the time.

The Gaza activist cartoon referenced in the 2003 National Journal piece was produced by Daniel J. Friedman, for the Diamondback student newspaper at the University of Maryland. The cartoon mocked the action by an American woman to block demolition of a house. A student sit-in at Maryland followed publication, and a pro-Palestinian organization published the email addresses and home phone numbers of Diamondback editors.