The canny GOP incumbent acts like a centrist Democrat. 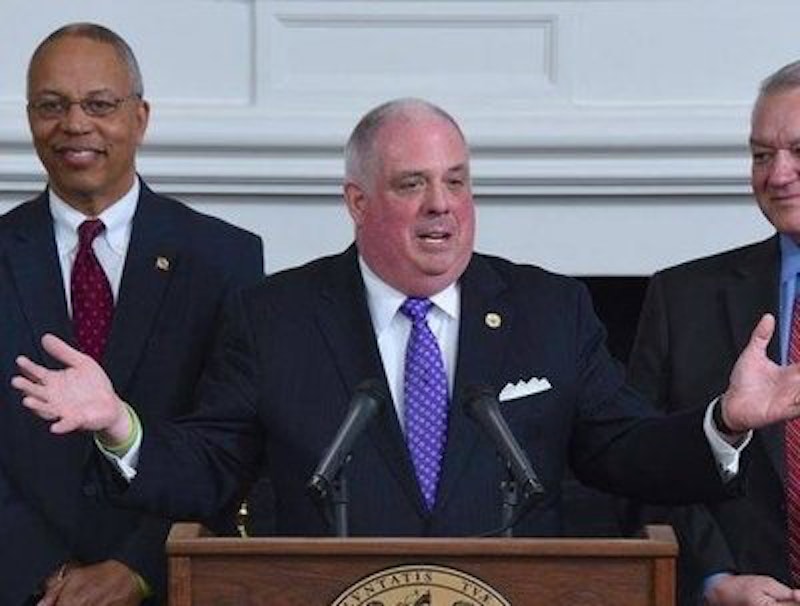 President Donald Trump chooses Twitter. Maryland Gov. Larry Hogan prefers talk radio. Both serve the same incendiary purposes—to rile up their bases and increase the temperature on the opposition. Governance by alternative mediums may be among the only characteristics the two Republicans share despite Democrats’ efforts to link Hogan to Trump as part of the set-up for the 2018 election.

Politicians have long sought ways to bypass the mainstream media and take their messages directly to the voters. President Franklin Roosevelt found his groove with “fireside chats” on radio. President John F. Kennedy, youthful and rakishly handsome, was a natural for television. President Jimmy Carter abandoned his suit jacket for a cardigan sweater to chastise the American public in a casual TV chat for their “malaise.” So, Trump and Hogan are merely employing the latest technology of an old technique to deliver unfiltered news—one a fumble-thumbs during insomniac hours, the other the Agora of the airwaves in drive time.

And now Hogan’s in a snit (on talk radio) because the Maryland Democratic Party has hired a communications expert to glue him to Trump’s harsh roll-back policies in a state where they are considered repugnant and retrogressive. That’s not all. The Democratic party—and its allies—have staged protests in and out of the State House and have gone so far as to invade the usually subdued Board of Public Works meetings in an effort to bait Hogan into defending, or aligning, with Trump’s agenda. But they’ve backed Hogan into a corner on his Facebook page, forcing him to shut down the widely used social media page to about 450 correspondents only to reopen it under the threat of legal action by the ACLU. Some of the communiques, as you’d expect, were not very nice.

But Hogan was truly miffed, and completely upstaged, when the heavily Democratic General Assembly gave Attorney General Brian Frosh the power to directly sue the Trump Administration without first getting approval from the governor as has long been the requirement. (Senate Republicans staged a walkout over the resolution’s passage.) Frosh had considered joining in the lawsuit against Trump’s initial anti-immigrant travel executive order which was eventually struck down by the courts. A new, more restrictive, ban is being issued.

The Democrats’ protests and singular complaints are narrow and focused on several of Trump’s stated goals—the repeal of the Affordable Care Act (Obamacare), which would have a devastating effect in Maryland because the ACA’s Medicaid expansion; a reduction in the federal workforce which is about six percent of Maryland’s total workforce and embraces 16 federal installations in the state; the cleanup of the Chesapeake Bay, which involves millions of federal dollars; and, of all things, Congressional redistricting, which has little appeal to anyone except political hobbyists and the most diehard party loyalists. Democrats argue that putting an end to Congressional gerrymandering is a national issue, Hogan insists that it’s a state problem.

Similar protests and demonstrations are taking place across the nation, on the streets and especially at town hall meetings sponsored by members of Congress who were on a break and back in their home districts. In those meetings, where politics is a face-to-face business, protesters, in many cases, are forcing Republican members of Congress to disavow, or back away from, Trump Administration policies. According to the White House puppeteer, Stephen Bannon, that would be the “deconstruction of the administrative state.” Or put another way, the repeal of nearly every rule, regulation and administrative fiat that protect people, the environment and the workplace.

That quandary for the Democrats is how to take down a popular Republican in a Democratic state who might become the first GOP governor elected to a second term since Theodore R. McKeldin Jr. in 1954. Hogan’s approval ratings are stuck very comfortably in the 70s, and he’s equally popular among Democrats as Republicans.

Hogan has resisted being drawn into a debate over Trump or his policies, arguing that he is a politician (or not) who was elected to govern a state and not engage in national politics. To that end, Hogan declined to support Trump, sat out the Republican National Convention and wrote in his father’s name for president in the November election. Hogan has made no attempt to cozy up to Trump since the election, but does claim a close friendship with Vice President Mike Pence, the former governor of Indiana. In his statements and actions, Hogan is focusing on the 17 outlying counties that he carried in 2014 and not on the seven mainly along the heavily Democratic I-95 corridor that he lost. (n.b. Hogan was scheduled to attend the winter meeting of the National Governors’ Association in Washington and join the nation’s other governors for a meeting with Trump on Monday.)

Those often mentioned as possible Democratic challengers to Hogan next year are two county executives, Kevin Kamenetz, of Baltimore County, and Rushern Baker, of Prince George’s County, as well as Del. Maggie McIntosh, of Baltimore City. Another long-shot mentionable is Rep. John Delaney, of Montgomery, who holds a safe seat in Congress that he may not want to give up to run for governor.

In addition to the legislative agenda before them for the 90-day General Assembly session, now past the half-way mark, the sub-text for Democrats during this meeting has been to force Hogan into taking positions on Trump’s policies which might be popular elsewhere but anathema in progressive Maryland. In little and big ways, that motive has attached itself to nearly all legislative actions through the session.

Take, for example, the new powers awarded to Frosh by resolution. The action not only embarrassed Hogan but diminished the authority of the governor’s office. Hogan was quoted as calling it “crazy” and “horrible.” Requiring the governor’s approval to initiate legal action against the federal government had long been a protected power of the governor as well as a safeguard against a rambunctious and independently elected attorney general. It likely would’ve remained that way if someone other than Trump were president. A new Goucher College poll shows that 64 percent of Marylanders disapprove of Trump’s handling of the presidency while only 29 percent approve.

But the newly assigned power gives the Democratic attorney general autonomy to pursue legal action against the Trump Administration and isolate and embarrass Hogan. Frosh is a highly regarded former state senator who was chairman of the Judicial Proceedings Committee and helped to enact many of the progressive laws whose intent he might choose to defend against federal encroachment or deconstruction.

Another Hogan takedown is the so-called transportation “scoring” bill, which limits the governor’s authority over transportation projects. Roads and highways are valuable inducements in the patronage kit and the appropriate squiggle on the map can often budge reluctant legislators. The General Assembly overrode Hogan’s veto of last year, which has set up a protracted battle during this session. The legislature has offered a compromise plan which Hogan has rejected, demanding full repeal of what he calls the “road kill” bill.

Hogan, for his part, has played the role of man-in-the-middle with skill and situational adroitness, having learned that the easiest way to beat Democrats is to act like one. Though he has the heart and the head of a conservative, he has behaved mostly as a centrist, avoiding the usual Republican ideological fights over cultural issues and, if he has offended anyone, it’s mostly the rock-ribbed Maryland conservatives who support Trump, though they are few.