Hillary Clinton’s chance to nail down election. Or not. 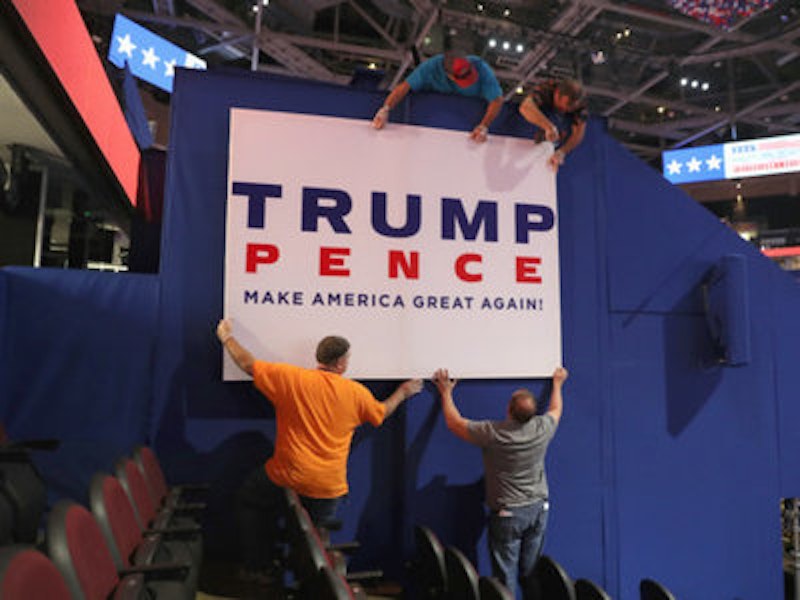 Leave it to Hillary Clinton to provide the adhesive that bonds the Republican Party. Mike Pence tried to do it. Ted Cruz refused to do it. Donald Trump almost botched a chance to do it. And the Trump spawn gave it their best shot. So as a Democrat, Clinton’s own party is unsure of her trustworthiness but willing to go along. But with Republicans there’s no doubt. Clinton is the enemy, and on that, if nothing else, they are united and indivisible.

Trump added a ditto to the lynch-Hillary throng in his lugubrious acceptance speech wherein he portrayed a lawless, dystopic America beset with crime at the bottom and corruption at the top which, he said, only he offers the leadership to correct and that Clinton would perpetuate with her legacy of “death, destruction, terrorism and weakness.” At another point, Trump shouted to the audience at-large: “I am your voice.” Trump’s 75-minute harangue was more a stern manifesto than graceful acceptance speech.

Nearly every speaker lambasted Clinton for transgressions dating back to her Arkansas days as a young lawyer to her most recent campaign commercials in which she affects a Southern accent. Clinton was the whipping-girl of the Republican convention, from an un-incarcerated traitor, to a murderer, crook, disciple of Lucifer, to an enabler of her husband’s peccadillos. Now it’s her turn to unleash thunderclaps. And wow! The Democrats certainly have a quiver full.

That’s what conventions are all about, and this week Clinton & Co. get a chance to send up a boogeyman of their own. But we already know who that is. During the Republican convention in Cleveland, the Clinton campaign took the extraordinary measure of programming anti-Trump commercials during breaks, counter-programming put to new and effective use. The Clinton ads became sly inserts into the GOP convention coverage and available footage for snap responses to Republican attacks. Still, Trump should get the usual five-point bounce coming off the convention that might last until Hillary’s spike arrives at Democrats’ gathering this week in Philadelphia.

But the Clinton forces were in an unforgiving mood and determined to deny Trump the day-after spotlight. In what should’ve been the afterglow of the Republican convention, Clinton dragged out speculation and the timing of her vice presidential runningmate throughout the day and into the evening before announcing her unsurprising and comfortable choice of Sen. Tim Kaine, of Virginia, at around eight. Clinton denied Trump the customary victory-lap headline. The House-of-Cards meanness of the 2016 presidential campaign continues unchecked.

The four-day Republican convention is an enduring mystery as well as a profound insight into the tight little world of Trump. Control freak and rap-master of his own charmed life in the wonderful world of money, Trump must be puzzled over the way his story arc unraveled during the Cleveland convention. History books, instant and retrospective, will fuss over how the fallout could’ve been prevented with a little discipline and attention. The convention format and delivery was loosey-goosey almost to the point of lacking in structure and direction. At times it seemed to get out of hand, but chaos and conventions are political synonyms.

Take, for example, the commotion that occurred on day-one when the Colorado delegation tried to force a roll call in a last attempt to stop Trump. They were gaveled down in short order on a motion by the chair to “move the previous question” on a voice vote. Now anyone familiar with Robert’s Rules of Order knows that moving the previous question shuts down debate and requires a vote. A similar move was made when the Texas delegation became agitated over a Cruz kerfuffle. The gavel and the rules are used to put down insurrections. And in politics, as in life, when you have power you use it.

Then came Melania Trump’s misbegotten speech. For three straight days, convention coverage zoomed in on Melania’s purloined prose, a couple of paragraphs lifted directly from Michelle Obama’s 2008 Democratic convention speech. An amateurish mistake and an oversight that normally should’ve been filtered, the accusations of plagiarism engulfed the celebratory occasion and overshadowed the convention’s messaging. A swift and simple admission of error could’ve, would’ve, ended the distraction almost immediately after it began. Finally, a Trump staff writer, Meredith McIver, took the heat and ended the embarrassment.

On the third night, the night that Pence was to be introduced to a national audience as the vice presidential candidate, Cruz stole the show, and not in a good way. To begin with, Cruz’s speech was more of a tutorial on his view of the Constitution than a convention stem-winder. Through it all, he refused to endorse Trump and was booed off the stage as the Trump family sat stone-faced in their VIP box. Trump was cheered as he joined them.

The question for political hobbyists is—why did the Trump-controlled convention allow Cruz speak at all when such enmity exists between the nominee and the runner-up over unforgiven insults during the campaign. The quick-take had Cruz establishing himself as the GOP candidate for 2020. If that’s the case, he did his cause lasting harm. Nonetheless, it is now visibly understandable why Cruz is the most reviled member of the Senate. And in another twist of the blade, Trump said later that he would reject Cruz’s endorsement if it were offered. Trump even joked that he might establish an anti-Cruz PAC in 2018 when Cruz is up for reelection to the Senate.

Many of the speeches throughout the convention were aimless and irrelevant. A couple of second-tier actors and athletes addressed the delegates. Rudy Giuliani delivered an animated speech, arms flailing like a helicopter about to alight. More of the speeches were devoted to making a case against Clinton than to boosting the candidacy of Trump. And the rawest of them all was the emotional address by a tearful Patricia Smith, the mother of a Benghazi victim, who accused Clinton of being responsible for the death of her son, an inflammatory but unsubstantiated charge.

But it was Gov. Chris Christie, of New Jersey, who set the searing sentiment of the convention’s anti-Clinton overtone. A former federal prosecutor, Christie in a rhythmic cadence, conducted a kangaroo court trial of Clinton and issue-by-issue elicited shouts of “guilty” to each charge. Christie’s performance led to what became the convention’s rallying cry, “Send her to jail,” repeated over and over again throughout the four days. Awkward, almost embarrassing, was the deliberate omission, or only singular mention, of Trump’s name in many of the speeches.

Anxiety was high preceding the Cleveland convention because of forewarnings of violence on the streets, but as it turned out there was more turbulence inside the hall that outside. In the end, Trump—one of the most divisive figures in modern politics who upended the GOP establishment and remade the party in his image—finally had the appearance of the unity he sought, courtesy of Clinton and Cruz, whose double-cross helped bring Republicans together, if only on the convention’s final night. Back home in the precincts the story is waiting for an ending.