Sometimes you have to hand it to him. 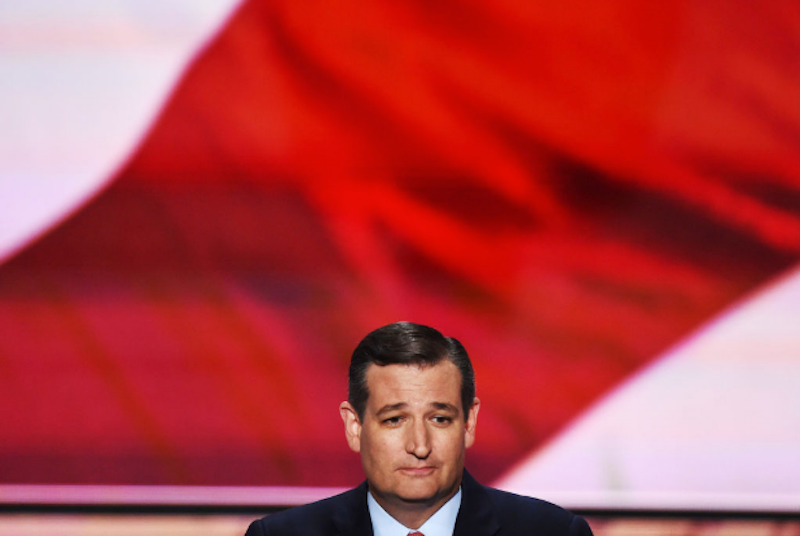 Ted Cruz had to explain why he didn’t endorse Donald Trump, and he did it without breaking a sweat. Watch him in front of the Texas delegation and you see a man with hand in pocket, microphone at his command. “We’ll take two more questions,” he says easily, and a little later, “One more question and that’s it.” The Washington Post called the meeting “surreal,” and The New York Times said, “Repeatedly, the taunts rained down on him.”

I think they exaggerate. The meeting was loud, not surreal. The rain was more like a drizzle with an occasional medium-size hail stone, and the drizzle didn’t last. The Senator was interrupted a number of times by cheers and applause, with the biggest hands building at the end of his talk. The original Times piece on the meeting backed into this idea many paragraphs down, after dwelling on the hostile delegates. “Others showered him at times with partial standing ovations, nodding vigorously and raising their hats,” that article said. Now there’s a sentence that could use “repeatedly.” It makes no difference; the sentence is gone from the paper’s website. But the article’s shortened version still has “Repeatedly, the taunts rained down on him.”

Ted Cruz faced a big room of Texas Republicans, some of whom yelled at him and some of whom cheered him, and by the end of his talk the cheers predominated. That’s how his experience reads to me on C-SPAN. His fateful convention address also seems less cataclysmic than the media says. His staff was “taken aback by the truly humiliating scene,” the Post says. The Times describes Trump, “stone-faced and clearly angry as he egged on delegates by pumping his fist.” Everyone seems to agree that Cruz was “booed off stage,” a phrase that pops up in coverage. But he finished his speech and left, which isn’t quite the same. His joke (“I appreciate the enthusiasm of the New York delegation”) received a laugh, and he delivered it after making clear there was no Trump endorsement on the way. Cruz’s expression during the contretemps has been described as devastated and also as smug. I’d say it was wilted. His mouth stayed in a stunted, weedy attempt at a smile. He was done, and nothing was good at that moment, but he hadn’t crumpled.

No shame. Donald Trump never apologized for trashing Heidi Cruz or smearing Cruz’s dad. In a normal world, we’d all have spent six weeks ignoring headlines about whether or not the big man would tell Cruz he was sorry. After all, Cruz couldn’t be expected to back a candidate who had attacked his nearest and dearest. First, the candidate would have to make it possible for Cruz to do so, if that were possible. Shuttle diplomacy would be called for, ending with a negotiated show of repentance where Trump alighted from his helicopter to kiss Mrs. Cruz’s hand. Once this had been broadcast on Fox, the endorsement could proceed.

But in this world the onus is on Cruz. What’s his problem? The Republican Party tapped its foot, waiting for him to come across. Politico wrote up the situation without mentioning Mrs. Cruz until the fifth-to-last paragraph; Cruz’s dad received no mention at all. Politico acknowledged the human dimension without understanding it. “Taken together, an endorsement for Trump is a bitter pill for Cruzworld to swallow,” Politico said, shaking its head. No, losing is a bitter pill, and that’s what staff (“Cruzworld”) experiences with the candidate. Endorsing someone who has insulted your wife and father—that’s something else, and it’s undergone only by the husband and son. Nobody should experience it, and nobody who submitted to it could be taken seriously as anything but a victim. His or her claims to leading the nation would be finished.

So I’d think, but nobody else has raised the notion. Cruz said he deserved an apology, but he didn’t hold out for one. Now he says he’ll focus on candidate Trump’s constitutional views and vote based on that. His motive is to avoid looking like a crybaby. But everybody else’s motive escapes me. I suppose Democrats can’t be bothered to concern troll for him, and Republicans have fallen under Trump’s reality field. They’ve pinned their hopes to the master abuser, and now their sense of up and down, of front and back, has been re-centered around the notion that good things go to Trump and everything else must adjust.