Stalking the K2 Epidemic in Brooklyn

Community, cops and media make a dent in the zombie problem. 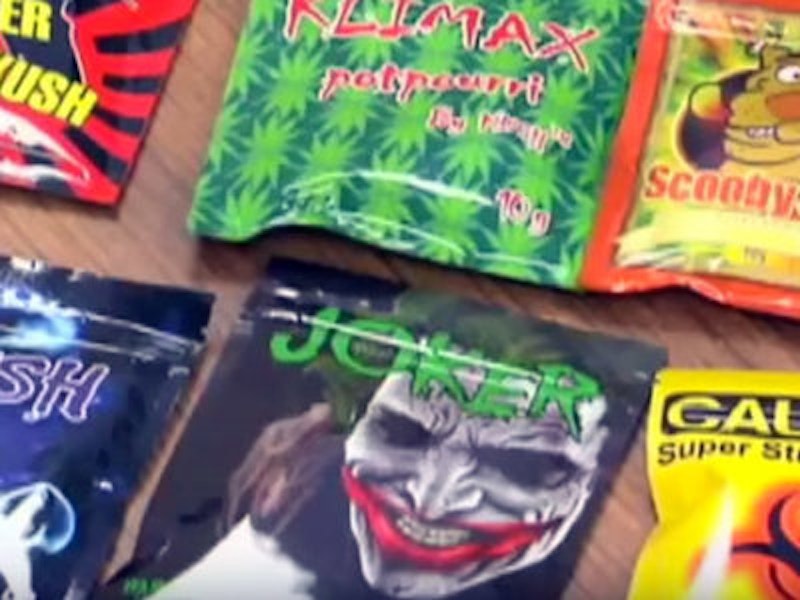 In bed, late at night, I received a text from my friend: “Wow, did you see that 33 people were hospitalized for that K2 shit near our house?” I wrote back, “Yes. I am really alarmed.” The breaking of this story had been part of the Facebook Trending newsday. It was surreal to see Myrtle and Broadway, a crossing I’d always enjoyed for its grit and found lively, described as “Zombieland” by a whistleblowing amateur videographer, whose guided tour with commentary laid bare the cruel toxicity of this synthetic cannabinoid. K2 was allegedly being peddled by shameless delis, smoke shops and lurking street dealers.

This gentleman’s cellphone video exposed “young dudes” and homeless people alike leaning, fighting with cops, zombie dancing, acting a fool and flailing. It made my head hurt. I read articles highlighting the video and the pitiable substance abuse epidemic. I watched other YouTube videos of K2 causing seemingly middle class young people to choke, barf, cry for help and lose their minds and muscles to gibberish and bloody-knuckled flopping. I cringed at the documentation of cops arriving to the scene of a sweaty, overweight, K2-poisoned father on the floor, shaking and sobbing, with his toddler scared and crying, and his wife kicking his butt. I watched scientists and social workers discuss the lethality of K2. I felt my anger well up, because I felt like the makers and sellers of this unregulated product—always with an unpredictable combination of chemicals and sometimes including rat poison—were out of control and due for a strong rebuke from the community. I was pissed and determined to show up at Myrtle and Broadway to investigate and protest.

The next day I marched up there after work. This was after the Doe Fund, a coalition of former homeless people who had every right to be mad about drug dealers preying on the city’s most vulnerable with a false promise of cheap euphoria, had completed their protest. They’d called for the city to shut down prime suspect Big Boy Deli. Their clarion cries and blue “No K2” signs, as I could see from YouTube and articles, drew the support of police officers, concerned citizens, community leaders and news crews. Though the raid with which the cops surprised Big Boy Deli failed to turn up any K2 packets, it did the necessary work of making all of the intersection’s delis and smoke shops shake in their boots and be on their best behavior. The customers in and out of those places, especially at Big Boy, had dwindled to a mere four or five oblivious heads at a time.

Maybe unnecessarily but motivated by passionate outrage, I glared at several deli employees who sat blushing on stools or grinning innocently behind counters. One deli had a smashed glass door. “These damned places,” I yelled, “are destroying lives.” I needed to get a handle on my anger, because—to be fair—I didn’t know which shops were the true culprits. Stationary cops on both sides of Broadway were steadfast, vigilant and calm, quelling pedestrian fears with their presence while also rattling the sense of “anything goes” too long enjoyed by public nuisances and street dealers. Ahead of me—I was in front of the deli opposite Big Boy—I watched two older men in tank tops, baseball caps and long shorts have an uneasy conversation with lots of hand-gripping before one of them, with a ponytail and chin beard, found the courage to approach two patrolling officers with what sounded like anxiety. Though I could neither hear the man’s words nor the cops’ response, I saw one cop put a gentle hand on the man’s shoulder, apparently to reassure him that they weren’t looking to arrest anyone. The police moved on. The man walked in my direction, muttering curses but free to go about his business. I walked away from the scene, taking Jefferson toward Bushwick. That overlooked side street is where things got depressingly foul. A cluster of squatting drug users huffed spray paint. I walked over human shit, piss and barf puddles and avoided a soaked mattress and boxes of clothing. The place was so bombed with trash that I couldn’t imagine anyone living there. Fresher air came at Bushwick Ave.

My commitment to learning more about the problem and its solution brought me to Myrtle and Broadway the following day. The city allocated almost a dozen officers to this K2 ground zero. NYPD set up a mobile command center that looked like an ice cream truck with flashing red and white lights on top. So I thought it was our citizen duty to go about our lives undeterred, coursing the intersection like usual. News crews readied at their vans.

I developed a habit of walking one side of Broadway, beginning at Myrtle, two blocks then crossing the street and returning two blocks toward the Popeyes and Dunkin’ Donuts. This provided me an opportunity to poke my head in Big Boy Deli once and for all. Of all the bodegas I’ve frequented since I moved here three years ago, Big Boy seemed abnormally gutted. All goods were stocked along the perimeter, behind the high wooden counter, in the wall coolers and a squat mobile ice cream freezer out of which a customer furiously chucked ice on the floor. About seven people milled through the store picking up bags of chips and drinks or shouting to the cashier for cigarettes or lottery tickets. I wanted out of there. A friend who lives right around there in Bed-Stuy met me at Skytown on a subsequent day and told me that she regularly gets food from Big Boy, that they were not really the ones in trouble, but that it was the nearby Dream Burner Tobacco Shop that supposedly got shut down for a day or two as police investigated them as a possible supplier of the substance. No K2 materialized there either, according to news reports.

My friend agreed that the particular officers tasked with the K2 crisis were pretty hands-off, and were examples of cool heads under pressure and community policing. “My boyfriend tends to think the cops are still intimidating and potentially a threat to vulnerable residents of the neighborhood, but I find them unusually calm and even necessary. Before their arrival because of the mass overdose event, I can tell you that it was routine to see and hear at least four zombies on our street on any given night.” She encouraged me, however, to approach the issue with the sensitivity and complexity it deserves.

Another day, I stumbled into some drama at this location. A disheveled group of five possible users, including a toothless woman with pink hair and a hunchback biker in a vest, panicked at the curb of my two-block stopping point on Broadway. “Aw, man! They’re gonna get him. They got him now! They gonna lock his ass up,” said the white woman with pink hair. I followed her crowd down a side street when they darted off and could see three cops stopped to engage a shirtless man who, to my mind, looked a little like the playwright of Hamilton. He shouted his innocence and stretched out his arms as if on a cross. The cops never touched him. They just kept their voices down, dispelled his alarm, and turned him loose like a fish they only caught for sport. I took one photo of the cops—which they didn’t seem to like—and another of the hard luck band. The shirtless guy returned to Broadway as the obvious leader and he was cursing an indignant storm. I ducked out of the way and gave up for the day. I was paranoid that a cop might question why I was taking pictures, but no one cared. The officers with their backs to the walls were peaceful and friendly. I have been going there every day. It’s like I’m addicted, but I come to be a part of the solution. Together, all compassionate parties have made a dent in the problem, without hurting or disrespecting those people who need our help the most.