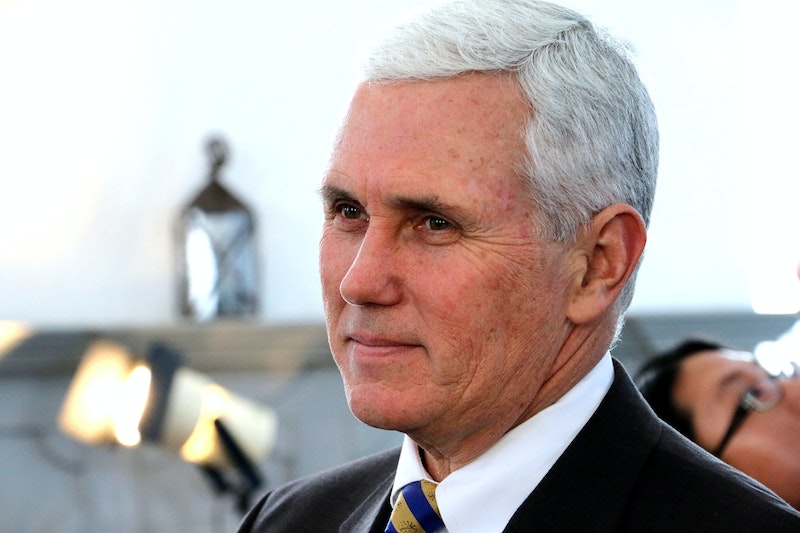 In The Big Short, Christian Bale singles out a financial portent, a water-running-backward sort of thing: tech stocks collapsed, but the housing market in Silicon Valley went up. Now here’s a political portent. Robert Jeffress, pastor of the First Baptist Church (11,000 members, Dallas), looks at Mike Pence, shakes his head, and sighs. “Trump still has my full support,” Jeffress says. Note the use of “still.”

Pence is governor of Indiana, a long-time conservative and a born-again Christian. Donald Trump is a foul-mouthed New York pussy chaser who gives money to Democrats. When Trump picked the right-wing Christian Republican as his running mate, mega-church pastors in Dallas ought to have been happy. More precisely, they ought to have been reassured. In theory, Trump the alien had picked one of their own, somebody who could vouch for him. Instead Pence is something they have to look past. For his part, the Reverend Jeffress keeps his mind focused on the essentials. He’s feeling let down he says, but “not disappointed enough to vote for Hillary Clinton.”

But why the letdown? Well, the Reverend says, “Some evangelicals like myself are disappointed that Pence caved to pressure from big business on a religious-liberty bill.” Pence signed the law that let Indiana business owners say no to servicing gay weddings. Five days later he called for lawmakers to “fix” the law, with “fix” meaning here what it does at the veterinarian’s. Pence wanted an amendment saying the law didn’t let anyone refuse business to anyone. In between signing and retreat, Pence had found himself up against America. Most notably, the NCAA had said (in the words of The Washington Post) that it “would avoid hosting future events in Indianapolis and even would consider relocating.” Because God-fearing conservatives wanted to draw a line against the gays, Indianapolis might become the place where the NCAA used to have its headquarters.

Pence got his amendment, and Indiana stayed on the right side of America. But now Pence was on the wrong side of Christian conservatives. There he has stayed for the past 16 months. Just ask Tony Perkins, boss of the Family Research Council. Perkins says Pence “caved under the pressure of big business.” Or Mike Gonzalez, senior pastor of Columbia World Outreach of Columbia, South Carolina, who says Pence “crumbled under pressure.” The Family Leader’s Bob Vander Plaats, Iowa’s grand macher of born-again politics, tells us Pence “wilted under the heat.” Steve Deace, radio personality and Vander Plaats’ fellow Iowa macher of born-agains, uses the language of treachery. “It was the worst we’ve ever been stabbed in the back by a Republican,” Deace says. “It’s the worst I’ve ever seen.” Erick Erickson, nationally known pundit of the Christian right, says, “Christian evangelicals, in particular, were disheartened that Pence threw them under the bus.”

Most of these people didn’t support Trump in the primaries; Erickson certainly despises him. But adding Pence to the ticket seems to have made things worse. Tony Perkins finally endorsed Trump, but first he announced that he wouldn’t support Pence as vice president. Now he accepts Pence as the price of having Trump, but Perkins still has to get his misgivings on record; his “caved under pressure” remark comes from an interview done after endorsing Trump. Why the hostility? Because the governor is the lance that broke. When America zigged off the course that right-wing Christians prefer, poor Pence (one reads he signed the law at an event “closed to the public and the press”) had the job of forcing America back. He proved no good at this task, because nobody could.

Rather than face political facts, the activists decide the fault lies with the pol. Luckily some still find reason to dream. “I am hoping that maybe the courage that Donald Trump has shown up against the political correct crowd will rub off on Mike,” says Tony Perkins. Courage is a wonderful thing, Tony.