Delegates readier to boo Cruz than cheer the nominee. 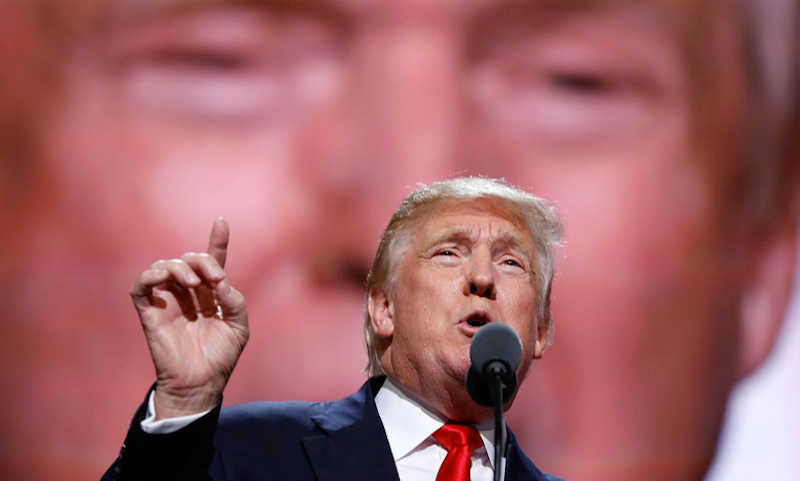 Donald Trump just accepted the Republican nomination for president. America’s two-party system has blessed him. Like Napoleon with the Pope, Mussolini with the King, and Hitler with Hindenburg, the egomaniac adventurer has breached the established order and can now go to work. But his speech was a bore and the audience slept. And it all took place in the Quicken Loans Arena, whose capacity (20,562 seats) is distinctly below the capacity of the Ladd-Peebles Stadium in Mobile, AL, where Trump held his first big-crowd rally back in August of last year.

I note that point because of chatter from a few weeks ago. Rumors floated that Trump might give his acceptance speech at an outdoor stadium. He would’ve tipped the rules over one more time. Helicopters might circle overhead; tiers of seats would mount up to the sky. In a ring of light at the vortex’s base would be the candidate, tiny as he stood before his podium, yet the focus of the scores of thousands of eyes banked before him. I don’t say I expected this, since rumors are rumors. But I didn’t rule it out.

Now I take a moment to notice a blessing. Real-life Trump just accepted the Republican nomination and he fell flat. Trump in Cleveland was the Sea Monkeys version of the rumor: the weeks passed, the package arrived, and fact pressed the air out of dream. On the big night, our showbiz fascist finally stuck his hand up the skirts of the political order. But the event turned out to be no big deal, one more session trapped in front of a red-faced, block-shouldered man winding his right arm like he was winching his dick. Applause at the Quicken Loans Arena appeared to be rationed, and none of Trump’s sentences came in for a major helping. The candidate had been stranded in front of 20,562 people with something better to do. I won’t say Trump is tired, because his face stayed fiery and his voice painful. But his act seems very tired.

The speech seemed like his usual, but with a few things left out and a few others stuck in. He didn’t say “Crooked Hillary” and he didn’t riff. His personal victories and grudges didn’t get a look in. School choice did, and so did other GOP stand-bys, none for too long. He threw in some of the personal angle, because the nominee is supposed to do that. “She was a truly great mother,” he said. But mainly he shouted about the great butt-kicking and re-ordering he had in mind, a scenario that was heavy on desired results, light on means.

Trumpismo depends on a faith that the red-faced man and his winch can haul the world’s big facts into their right arrangement. Just when Trump has grappled the GOP to his side, his winching powers seem harder to believe in. I don’t know why that is, but the delegates seemed to feel it.