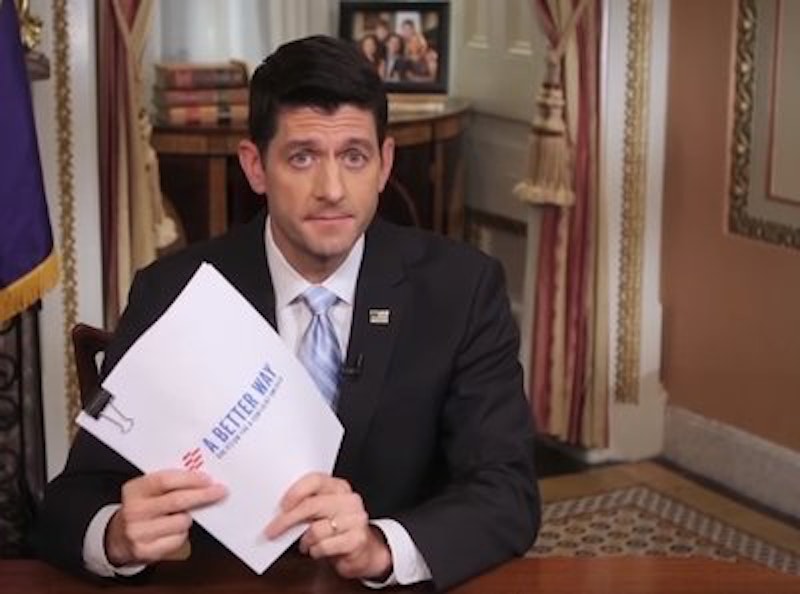 It’s an iron law of governance: Government can never do enough in an area where it previously did nothing. Once a popular benefit is established, there’s no turning back. Not Social Security, not Medicare, not Medicaid, not unemployment insurance and the rest of the entitlement network. And now, up for the test of its staying power is the Affordable Care Act, once known as Obamacare but newly reborn as Trumpcare, or Ryancare, depending on who’s juggling the hot potato at any tenuous moment.

The godfather of the ACA repeal is House Speaker Paul Ryan (R-WI). The House has already voted for ACA repeal at least a half dozen times. But now Ryan has the come-lately support of President Donald Trump, who on any given day, or Tweet, is for repeal and replacement with something “better,” or is for Ryan’s plan, or is opposed to modifications of Ryan’s plan which Ryan says are now necessary for its passage. To satisfy the conservative holdouts in the House, Trump’s latest brain-freeze has him supporting $880 billion in cuts to Medicaid—the program for the poor, disabled and nursing home patients—over the next 10 years, including block grants to states and requiring able-bodied recipients to get jobs. As Otto von Bismarck observed, “Never watch sausage or laws being made.”

Add to repeal of the ACA the Trump Administration budget, and government as it has evolved since Ronald Regan left office in 1988 is greatly diminished, if not, in some cases, wiped out. To gather the $54 billion Trump wants to spend on weapons of war, he would cut an equal amount from those programs and agencies that are essentially in the quality of life business—the poor, the environment, the arts and humanities, housing, transportation, education, health and human services, the state department and labor, many of them programs that Trump’s base relies on, including meals on wheels and job training programs. Even the Chesapeake Bay cleanup would lose its federal funding. Trump’s budget proposal would not make America great again, as he proclaims, but take the country back to sometime around the Eisenhower era of the 1950s. But no budget emerges from the sausage-making process as it was submitted.

Ryan and House Republicans also want to reduce spending on Social Security and Medicare, but the Trump budget leaves those sacrosanct programs untouched, at least for the moment, as the President promised. Social Security puts $572,531 billion a year into the pockets of recipients, that helps lift many elderly out of poverty. There are 895,225 Social Security beneficiaries, or one in seven, Marylanders who receive a total of $12.8 billion a year that is recirculated through the state’s economy.

Republicans are fractured into basically three factions that make final repeal a question mark. Democrats are united against repeal and accumulating support from break-away Republicans who fear retaliation at the polls. There are those Republicans who oppose any government dictate at all, those who believe the ACA repeal goes too far and those who believe that it doesn’t go far enough. If the ACA repeal does squeeze through the House, where the GOP has a 241-194 vote majority, its passage in the Senate is doubtful to unlikely. There, the GOP majority is thin, so there appears to be enough Republican opposition to repeal to preserve the program.

Ryan, and the Trump Administration, received an expected jolt last week when the Congressional Budget Office released its scoring of the GOP repeal legislation—which Congressional committees expected and were working frantically to head off. Essentially, the CBO study said that eventually 24 million people would lose health care coverage over 10 years, 14 million immediately upon repeal. The CBO score also said that repeal would save $337 million in the first year. At that point, Ryan modified his strategy: ignore the number that would lose coverage and concentrate on the savings as the selling point. The Trump Administration called the report baloney and all wrong.

Gutting, or repealing, the ACA is not about repeal. It’s about transfer of wealth. It would take the subsidies and tax credits now set aside for low income participants and transfer them to the wealthy. Ryan says repeal is also about choice. Instead of mandated coverage, individuals could choose levels of coverage they want or even whether to have health care insurance at all.

The Ryan approach would take America back to pre-ACA days whereby those who have health care coverage pay for those who don’t. The emergency room walk-ins without insurance get a free ride because hospitals, rightfully, can’t refuse treatment. Nearly half the premiums paid by those with insurance is set aside to reimburse hospitals for treatment of uninsured patients. One year in Maryland before the ACA was enacted the payout to hospitals was $765 million out of the pockets of those with insurance. It works this way: A percentage of the premiums paid by subscribers to insurance providers is set aside in a pool to reimburse hospitals for care of the indigent and others who lack insurance.

At the core of the debate over repeal is the issue of Medicaid, the health care program for the poor and the disabled. Medicaid has existed since the 1960s, but under the ACA it was greatly expanded to include those with marginal incomes—up to $16,000 for a single person and $34,000 for a family of four. The newly expanded program was adopted by 31 states as an option—but rejected by most Republican governors—with the federal government picking up the cost for the expansion through 2020. The poor and disabled living in states where GOP governors rejected the Medicaid expansion were left without health care coverage, which many believed was heartless and irresponsible as the federal government was paying for it.

The Medicaid expansion brought 11 million new people into the system, many in poor states and impoverished areas, and provided them health care for the first time. Under the ACA, individuals and families with low or marginal incomes receive either Medicaid or a tax credit, one or the other, to provide coverage. Those 31 states, obviously, resist any tampering with the ACA that would jeopardize the promised federal subsidies. What’s more, the Ryan repeal plan would defund Planned Parenthood which provides women’s reproductive health care in many poor areas of the nation where it’s the only care available. (Under federal law, Planned Parenthood is prohibited from using federal funds to provide abortions. Federal funds are used for other services such as cancer screening, family planning and mammograms.)

In Maryland, for example, the Medicaid expansion under the ACA added 291,000 new enrollees to the program. Nearly 1.3 million Marylanders—about 20 percent of the state’s population—are covered by Medicaid and the Children’s Health Insurance Program (CHIP.)

The political fallout from repeal could be enormous. Many Republicans believe repeal without adequate replacement could cost the party control of Capitol Hill in the 2018 elections. The party in power historically loses seats in off-year elections. The entire medical profession, the insurance industry, the hospital association, the scientific community and many others have lined up against repeal, predicting chaos because of the number of uninsured that will be dumped into the system without health care.

At rallies and protests across the nation, stakeholders in the ACA and their supporters are making their opposition to repeal known in demonstrative ways. AARP, one of the most powerful lobbying organizations in the country with its 36 million members, has been vocal about its unequivocal opposition to repeal of ACA, as has Planned Parenthood and numerous grass roots organizations.

The problem for many Republicans with the ACA is that it works. And more than a health care issue repeal is an ideological and partisan struggle. The ACA was President Obama’s signature domestic issue, the closest America has come to universal health care since Republican Theodore Roosevelt began the quest more than a century ago and has been the dream of every Democratic president since. Obama had said he would have preferred “Medicare for all” but lacked the votes to get it through Congress. And for many in the GOP, eradicating Obama’s legacy is the primal scream.

The ACA has had its kinks and bugs that are gradually being worked out. So, it’s important to remember that it took at least 10 years to de-bug Medicare’s problems to the point where it’s now one of the most effective and efficient programs that government delivers. Ryan places the free market philosophy above the health and welfare of Americans.