If the Question Is Trump, the Answer Might Be DSA

Sam Pritchard talks about why he joined the Democratic Socialists of America. 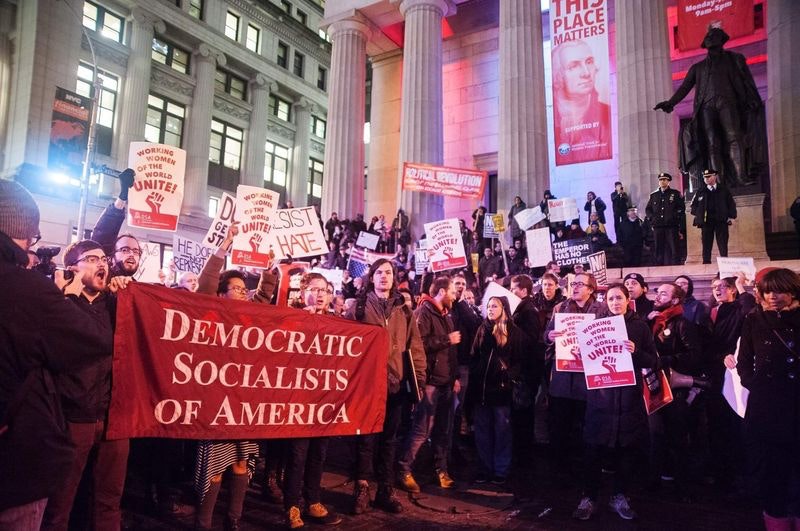 If you haven't heard of the Democratic Socialists of America (DSA), it's not surprising. DSA’s been a small left-wing activist group for some time—but their membership really increased over the last year, in part because of the prominence of Bernie Sanders' campaign, and then November’s election. In the week after Trump's victory, they signed 1,600 people online, an 18 percent jump in membership.

Sam Pritchard signed up with DSA the day after the election. Pritchard is a new recruit, and not in leadership—but he has a lot of experience as an organizer, and, like many who have just joined, he's excited about working with DSA. I interviewed him about what the Democratic Party has done wrong, and why he's signed up with DSA.

SPLICE TODAY: What is your background as a political organizer?

SAM PRITCHARD: It started with Obama in ‘07, and I just fell into it as a volunteer. I was 17. I went from a volunteer to an organizer, and then at some point on the Obama campaign I learned how to do database management for political campaigns, so I did that for a few years. From late-‘07 up through the 2012 election cycle I was doing political work on and off. Lived in DC for a while, worked on various races around the country, local, state, and national.

Obama was the big one. I worked for the AFL-CIO during the 2010 cycle. There were a bunch of races that we were providing support for. I worked for a state assembly race here in California, a senate race in Massachusetts—Ted Kennedy's seat; I didn’t work for Martha Coakley, but another candidate in the primary who lost. I did the whole gamut, from local politics to national politics and in lots of different parts of the country.

ST: Why did you stop?

SP: I'm in school right now. I did organizing instead of going to college. I started in political work straight out of high school. I was a high school dropout. I was in a community college when Obama ran the first time and I got involved, and wasn’t doing well in school. So I just said fuck it, I'm going to jump in and not look back.

So I went back to school. I thought I'd do something other than politics, which was probably always unrealistic. The likelihood was I was going to go back into politics. But after Trump, I felt like I can't even wait till I got back to school. I have to do some activism in my free time.

ST: Why work with DSA rather than with the Democratic Party?

SP: I think like a lot of people, especially left-leaning young people, I have a lot of dissatisfaction with the Democratic Party. They whiffed on what should’ve been a resounding victory. The Party has just been a shambles for a while now, as evidenced by our complete decimation at every level of politics. We have unified control in four states. The GOP has it in 26. It's a disaster. We've been completely destroyed and I think a huge amount of the blame lies with the Party, particularly for not understanding the relationship between policy and politics.

It's not enough to have magic words that once you discover them and say them in the right tone and in the right order, voters will suddenly like you. My experience working in Democratic politics was that there was some really wonderful cutting-edge stuff done with organizing, and on the ground game and data and technique. And there was a lot of focus on how do we take this to the next level by making messaging and rhetoric scientifically informed, and empirical and backed by political science research.

And that's great, but where that connection totally fell apart was policy. How do we do policy in ways that make the Party stronger, and make us more popular? My experience was as soon as it came to policy people stopped thinking in political terms. It became all technocratic and wonkish. And when they were thinking in political terms it wasn't about what voters want. It's about, "Can we negotiate to get past the gauntlet of special interests and Republicans and everyone else we have to negotiate with?" Instead of thinking "What can we offer concretely as policy that voters like?" And what can we offer that if we manage to get it passed, would cement our relationships with our voters?

That was never part of the equation that I saw. And I think that anybody can observe that looking back at the last eight years and say, wow, the Democratic Party did very little policy-wise to empower itself or endear itself to voters. And so the DSA, a more left-leaning group, standing in favor of things like single payer, which is actually pretty popular with voters, if not politicians and interest groups—that to me is what has to happen if there's going to be a more successful liberal left or progressive left coalition in this country. We have to start offering people stuff; something that they want.

SP: My understanding [of the DSA]—to be clear, I'm a newer member. I just joined after the election. But my understanding as a rank and file member is that it's an interest group and an organizing group. I think of it as similar to people who join the Sierra Club or some other kind of action group, except instead of it being predominantly a model where you give money, there's much more on the ground activism and organizing that's the focus. I signed up the day after the election. I felt like "Crap. I gotta do something.

ST: What does DSA do?

SP: In California, one thing that we're very excited about is there's been some state efforts to get single-payer health care passed statewide. There's a bill in the California state senate right now, SB 562.

We're not overly optimistic about it passing right off the bat through the legislature. But it's the opening of a fight in the state for this, for a single payer model in California. And the Nurse's Union, NNU and some other labor groups and healthcare advocacy groups are lining up behind it. And I know the East Bay chapter of DSA, Oakland and Berkeley, they've already started, they're out canvassing and getting people to sign petitions and what not. So their membership is canvassing, they're organizing canvasses, they're recruiting volunteers, and they're developing relationships with people in the community by talking to people and recruiting them.

ST: Have you been out canvassing?

SP: No, I haven't because I've been focusing on some other stuff in the chapter. I've been, aside from going to the various meetings and talking with people and planning stuff out, working with another guy in the chapter, putting on organizer training. Since I've been a field organizer, I've worked with another member with experience and we've created a very condensed introductory training for people who are new to organizing. We're trying to be very practical, teaching people how to do the concrete work of political organizing in the Marshall Ganz model of community organizing, that Obama used so well. Which is where I learned it.

It's a six-hour training—it's amazing to me how many people show up on a Sunday to devote six hours of their weekend to sitting in a room with 20 socialists learning how to do organizing.

ST: DSA doesn't sponsor candidates, right? Because you're not a political party.

SP: Yes, though I know there are a lot of people who are interested in getting DSA more involved in recruiting and running candidates. Not as a political party, but in the way labor unions try to recruit politicians to run for office. That's not really part of what DSA does now, but it's something a lot of people want. I like the idea—we need groups that are recruiting people to run for office and giving them the tools, especially if those people aren’t independently wealthy enough to do it themselves.

ST: Do you have a sense of what the membership jump is like?

SP: In the LA chapter what I've heard at the meetings is that before the election we had 300 members, some of whom were on paper. Now we have 1500. And at this point a lot of the challenges we're facing are how to adapt the structure of the chapter to accommodate so many people. Which is a good problem to have.

I think something most people hope to get out of an activist space like this is you go and you do something concrete and you get to work with other people and you leave feeling a little more reassured and a little less panicked and terrified. You're standing with other people in solidarity doing something to fight back. I usually feel much better about things after I've gone to my local DSA chapter.