“Presidential” one day, a loon the next. 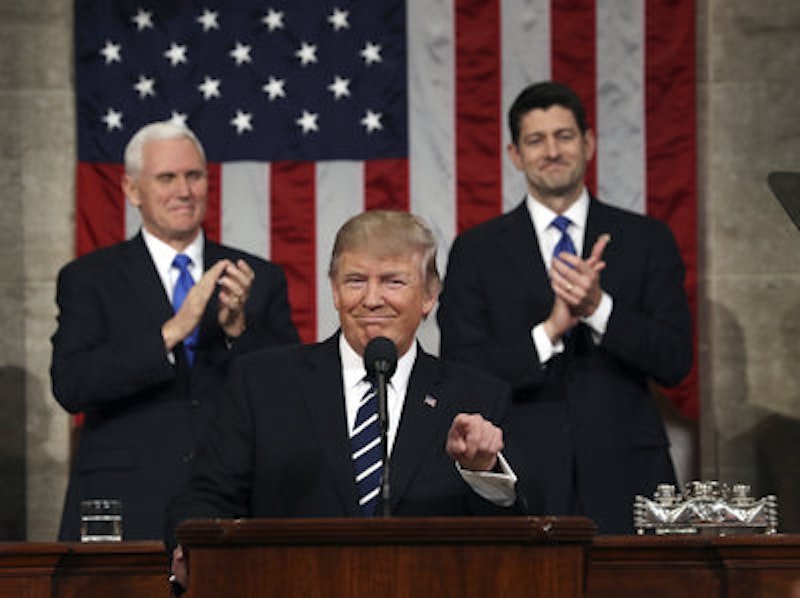 The late NBC-TV anchor John Chancellor, among others, is credited with observing, “the trick to television is sincerity, and once you learn to fake that you’ve got it made.” So we, the American gullible, are now expected to believe that President Donald Trump is suddenly tamed and transformed by a teleprompter and a few soothing words to the weeping widow of a fighting man he ordered into harm’s way. And that only a day after Trump blamed former President Barack Obama for the death of Navy Seal, Chief Petty Officer William “Ryan” Owens.

We’ve had an actor for president before. So make no mistake: Trump is a performer—and his first appearance before a joint session of Congress was a calm and steady performance. With Trump it’s the spectacle that matters, not the content. The morning after the reviews were in, Trump tweeted a satisfied “Thank You,” as if to acknowledge that gratification had been fulfilled and there was no one to kick around for disagreeing. That is, until the truth-in-packaging finally sunk in a couple of days later. (And intensified over the weekend with his hysterical tweeting.)

Initially, Trump was graded on style, not text or context. He used the teleprompter efficiently and smoothly. His voice was honeyed and subdued, faking sincerity until it oozed. The emotional high note of the address was Trump’s recognition of Owen’s widow, Carryn, a reverential departure from the usual raw calculus of government manifestos. Commentators declaimed the moment the apogee of Trump’s presidency (at the time a month old), and one oracular pundit even awarded Trump a second term on its delivery.

Consider the observation that it seemed as if someone was whispering words in one Trump ear and speechwriter Stephen Miller was recording them as they came out the other. The speech had the cacophonic sound of several different voices. But, then, as noted, Trump is familiar with teleprompters from his years as a television facilitator (believe it or not, there is an acquired skill to using a teleprompter). And it’s worth mentioning that throughout his campaign, Trump—in a severe case of teleprompter-envy—mocked Obama mercilessly for his reliance on the device as, arguably, one of the greatest orators ever to occupy the White House. For as everyone with a tuned ear knows, Trump’s natural language contains the chipped edge of Queens, NY, a scrambled, repetitious syntax that seems long on diphthongs and misspellings and short on complete sentences and punctuation marks.

Unfortunately for Trump, there has been a subtle but discernable shift in the tone and tactic of the news coverage of the White House. The mainstream media have put aside their usual focus on the visuals and the comings-and-goings in favor of an investigative approach because of the slip-shod behavior and clumsiness of his administration and the suspicion of borderline ethical behavior, especially over Trump’s business interests.

Trump’s address to Congress was, at best, a calculated attempt at a fresh start for his rag-tag administration that got off to one of the bumpiest beginnings of any in modern memory. Yet in a sense, it was a one-hour recitation of many of his campaign themes and promises—what some saw as another victory lap—some with refinement and others still rough. He asked for bipartisan cooperation after a month as president attacking Democrats for their unwillingness to work with him. Democrats’ reaction was predictable and pointed. But the big puzzlement was the quandary and confusion among Republicans who were left visibly divided among approaches more than outcomes. Congressional Republicans have their own ideas about deconstructing the Obama legacy which they seem unwilling to yield to their president and party leader. Trump’s speech even sharpened deep divisions within the White House.

Take, for example, the Affordable Care Act (Obamacare). Trump wants to repeal and replace the increasingly popular program, The Republican majority in Congress wants to repeal and replace the increasingly popular program. Neither knows how, except that Trump wants to preserve certain features of the health care program that Congress would eliminate. Trump left the major entitlement programs—Social Security, Medicare and Medicaid—untouched. The Republican Congress, especially House Speaker Paul Ryan (R-WI), wants to overhaul the programs and reduce benefits, including shifting Medicaid to block grants to the states, which the states reject. (The expansion of Medicaid benefits to the states is key to any reform of Obamacare or Medicaid itself.)

On both the foreign and domestic front, as well as within the White House, Trump’s use of the controversial phrase, “Radical Islamic Terrorism,” is another example of calculated contagion. Muslims are upset by Trump’s conflating of religion and terrorism, and the sword-brandishing has intensified the divide between the hot-eyed hawks in the White House and those who are attempting to calm Muslims—and allied Muslim nations—who are upset with Trump’s travel ban as well as his constant reference to national security threats. A newly sanitized version of the travel ban will not include a blanket prohibition on Iraqis nor is it expected to specify religious minorities.

Trump still clings, as he made clear, to the fanciful idea of building a wall partitioning off Mexico (although he did forego saying Mexico will pay for it) while at the same time he softened his stance on the much-maligned travel ban as well as a chance for those who are here illegally to achieve legal status.

The domestic cropper came in two waves: First, Trump will increase the military budget by $54 billion by reducing agency spending across the board. (Trump’s most chilling line yet: “We’ve got to start winning wars.”) The EPA will receive the biggest blow, a 20 percent reduction for those who guard our land, air and water against polluters. (Trump has already issued an executive order allowing coal mine operators to dump their toxins into waterways.) The second major blow is the federal workforce, which in Maryland totals 145,300, or 5.5 percent of the state’s workforce. Trump said he will leave major entitlement programs untouched, roughly 80 percent of the budget, so the math suggests that the cuts would be made by shrinking the government payroll.

Hanging over the Trump Administration, through it all, is the brooding presence of Russia—who in the Administration and Trump’s circle of campaign aides had contact with Russian officials and why. So far, several names have surfaced. Among them: The ousted national security adviser, Michael J. Flynn, and newly-installed Attorney General Jeff Sessions. Late additions include Trump’s son in-law, Jared Kushner, who participated in a meeting with Flynn and the Russian ambassador, Sergey Kislyak.  Both Flynn and Sessions lied about their contacts, Sessions apparently under oath during his confirmation hearings. Under pressure to recuse himself as well as to resign, Sessions has separated himself from the investigation into Russia’s meddling in the presidential election and any contacts between Russian and Trump Administration officials.

There is, too, the undercurrent of suspicion that Trump’s nationalistic “America First” campaign and his xenophobic approach to government has had the unintended consequence of unleashing a series of hate crimes in America. The desecration of dozens of Jewish cemeteries across the country, bomb threats against Jewish centers and schools, random killings of foreigners and the appearance of swastikas and other symbols of hatred have intensified since Trump won the election and became president. Trump has denounced the hateful destruction at Jewish Cemeteries.

The teleprompter can be an aid or a crutch. For Trump the machine appears to be the latter. It seems to keep him focused and restrained. And it contributes to the illusion of sincerity by forcing the user’s eyes to look directly at the television audience as if the delivery is a familiar one-on-one chat, and not a shifty-eyed con job.

Trump’s underlying problem is believability. He doesn’t appear to have a thought or conviction of his own. He seems to latch onto the expression of the last person he talked to and present it as administration policy. Trump, at best, is a one-dimensional being. Soon, Trump will have to put aside theatrics and start governing.