Who cares about the “majesty” of the office? 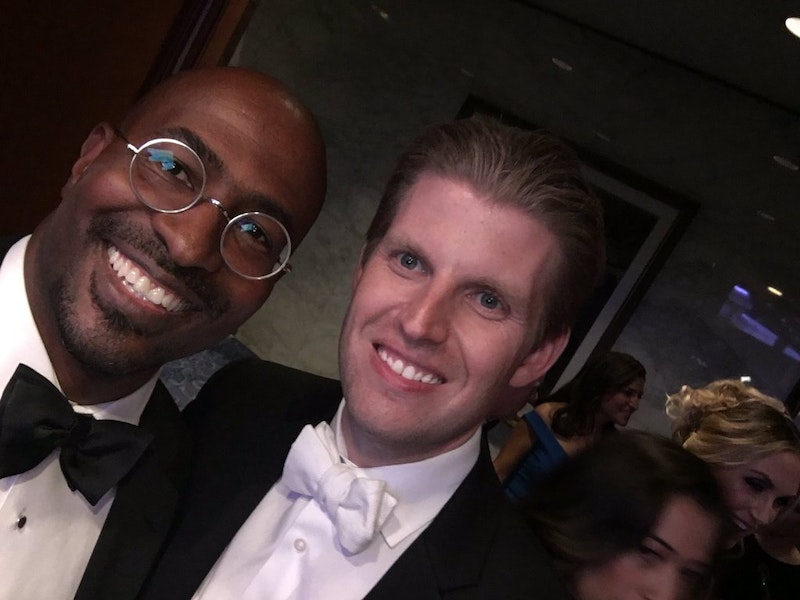 How is the #Resistance going? Let’s ask Van Jones, the “good guy” on CNN’s brain dead panels, the man who shut down Corey Lewandowski on election night and quietly asked him “Corey, you won. Why are you angry?” He went on to say that Trump’s election was a “whitelash,” and on that night when so many journalists were caught flat-footed, Jones came out on top, assessing the situation in the immediate aftermath with an appropriately somber and thoughtful approach. Imagine my surprise after Trump’s boring speech to Congress the other night, when Jones said on CNN, “He became President of the United States in that moment, period.” Why are you so eager to fawn over a man who deserves nothing but contempt just for the sake of the dignity of the office? Fuck the office. The fact that Trump could hold that office means it’s tainted. In one of the most disappointing and disturbing moments since November, I saw so many pundits bend over backwards to give the President any quarter for seeming “presidential.” Who cares? Every one of you ought to be tossed into the Potomac. Chris Cillizza asked “I ask again though: Why can't Trump be praised for delivering a good speech full stop?" Pick your jaw up, dude. I don’t get this and it scares me. Maybe, as my dad wrote the other day, the media fawned because Trump didn’t talk about them.

So why am I being delusional? Van Jones is just as much of a vapid hack as Cillizza or Chuck Todd: check out this tweet from last year’s White House Correspondents’ Dinner: “When I say #NeverTrump, I don't mean THIS Trump. #NerdProm #WHCD #cnn @cnn @EricTrump." A selfie with Eric Trump. “Nerd prom.” Sick machine. Joy Behar on lowered expectations: “Well if he doesn’t mock a disabled person or grab Elena Kagan by the genitals, they consider him presidential.”

Why are people obsessed with speeches? I tune out when Trump is reading prepared remarks. That’s why his ad-libbing and improvising resonated so much with otherwise politically disengaged people, and continue to throw many others into hysterics (cf. his freewheeling press conference a couple of weeks ago). Alex Pareene didn’t mince words when it came to bootlicking pundits obsessed with The West Wing: “You Cretins Are Going to Get Thousands of People Killed”: “Yeah, there are guys (and it is guys, for the most part) out there who spend their whole careers trying to be Dan Rather staring down Nixon or Cronkite turning on Vietnam—or even just Tim Russert making some elected mediocrity stammer with a patented ‘tough question’—but mostly these guys want to be witnesses to Great Men Making History. They want to Respect The Office Of The Presidency.”

Where the swamp vacs at? Suck them all up, anyone that’s compelled to give Trump any respect because they value the pageantry more than the people of this country.