Gay rights and Christian rights can easily co-exist if reason is applied. 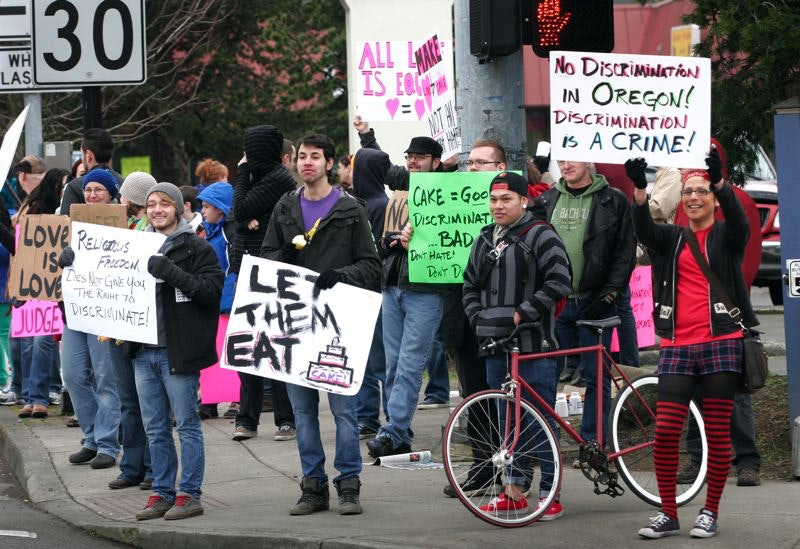 A couple owns a small business that makes customized food products. In accordance with what their church leaders have taught them, they refuse to produce a particular item for another couple. They'd fulfilled orders for them in the past, but feel that the theme of this request violates their religious conscience. The government then intervenes and forces the owners, who have five children, to pay the aggrieved couple $136,927.07 in damages. Orders drop off, and the business soon shuts down. The husband, desperate to feed his family after the government took away its livelihood, takes a job as a garbage man.

This scenario took place in 2013 in the United States, a nation of liberty founded on religious freedom. The owners are Aaron and Melissa Klein, who once ran an Oregon bakery called Sweet Cakes by Melissa. The aggrieved parties are lesbian couple Rachel and Laurel Bowman-Cryer. The item in question was a wedding cake for their same-sex wedding. Same-sex marriage in Oregon wasn't legal at the time. Court documents filed on the plaintiffs’ behalf stated that the cake denial had caused them emotional, mental, and physical damage—they'd suffered with work, and an inability to sleep. They alleged that they felt “mentally raped” and less talkative. The Oregon Bureau of Labor and Industries—the state agency responsible for discrimination claims—accepted this without taking testimony from any mental health professionals. Brad Avakian, the Bureau’s Commissioner, appoints all the prosecutors, who then answer to him. He appoints the judges making the rulings. Essentially, he's a one-man judge and jury.

The appeals court took up the Kleins’ case last Thursday in Salem, Oregon. Assistant Attorney General Carson Whitehead said in court that discriminating against someone because of sexuality is "enormously harmful. It goes to the very sense of self." He's incorrect. The Kleins had baked a cake in the past for their gay customers. They declined to bake the wedding cake because of a spiritual opposition to the institution of same-sex marriage. The Kleins’ religious beliefs are as crucial to their sense of self as the lesbian couple’s sexual preference is to them. The Bowman-Cryers said the appeals proceedings felt dehumanizing at times. The Kleins' lawyer mistakenly called Rachel Bowman-Cryer "Rebecca" during his rebuttal. She took offense. “I'm still not a person," she said. "I'm just a name that starts with R."

$136,927.07 should help soothe that pain too. It’ll certainly cause severe pain to parents trying support their children. In a 2013 interview, Avakian told The Oregonian that the goal is to rehabilitate when business owners don't adhere to the law. “For those who do violate the law, we want them to learn from that experience and have a good, successful business in Oregon.” Ask the Kleins what Avakian did the “rehabilitate” their business.

Do the Bowman-Cryers and Brad Avakian—who’s praised an LGBTQ advocacy group on Facebook—think that devoutly religious people believe they have a choice when it comes to acting on their faith? There's no choice in faith, nor is there reason. Faith exists to fill the reason void. You break your faith; you've committed a sin. The Founding Fathers’ intent was to protect the right to religious expression well beyond the hour spent in church on Sundays.

The Bowman-Cryers would never have filed this complaint if the Kleins had been Muslims. They'd simply have gone to another bakery. End of story. No business would’ve been shuttered. Liberals don't expect much from Muslims. In a bigoted way, they hold them to lower standards, perhaps thinking they come from backwards cultures and can't help themselves. The Bowman-Cryers could’ve easily found another bakery happy to get their business, with minimal inconvenience, but that would have meant foregoing a potentially big payday. Someone set up a GoFundMe account for the Kleins that raised over $100,000 in nine hours, but GoFundMe took it down.

Those on the political left like to portray people like the Kleins as hateful. Who, other than a person filled with hate, would want to see a family financially ruined because they followed their pastor’s teachings in choosing not to make a wedding cake? The Kleins are not that, as anyone who watches their interview on the cake case can instantly discern. Melissa Klein said she loves the Bowman-Cryers.

Barack Obama began his presidency opposing gay marriage. Societal standards are changing too fast now for the religious to keep pace. In a truly free country, the government couldn’t force someone to create a custom-made item for another person. In a nation where the First Amendment allows Westboro Baptist to wave “God Hates Fags” at military funerals and Nazis can march in the streets wearing swastikas, it's absurd that the Kleins can't choose how to express themselves.

I oppose any law stipulating that a business can refuse to serve gay people based on their sexual preference. I support gay marriage and equality for gay people. I also support people's right to practice their religion as they wish. Why does one right trump another? No real harm was done to the Bowman-Cryers, who are old enough to understand how religion works. They weren't mentally raped. Anyone who thinks the Kleins have caused $136,927.07 worth of harm to two individuals needs to do some self-reflection. That punishment is sadistic. If the Bowman-Cryers end up winning the case and accept money they neither earned nor deserve, they're not much better than thieves.