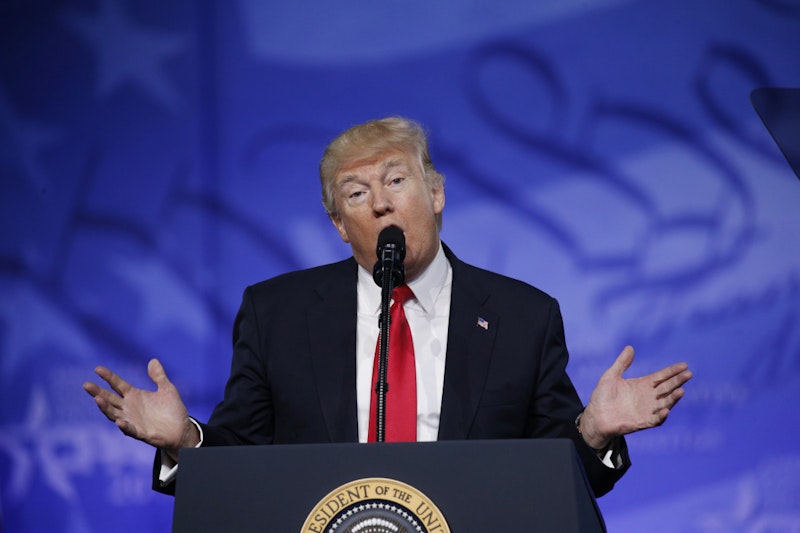 Over at Rolling Stone, a headline promises meat: “How the Conservative Movement Went All in For Trumpism.” But the reporter did a so-so job and the article doesn’t tell that much. Certainly not about how things got as they are—the editors pulled a fast one with that head. The writer, Sarah Posner, just poked about this year’s CPAC and wrote up her notes. The results indicate little about any new influence exerted by Donald Trump and his ethno-nationalism. Posner’s thrust seems more that wingnuts say crazy things.

On the Trump front, the writer did find that eight speakers were from Breitbart, that one speaker (not from Breitbart) said Putin was behind all the street agitation against Trump, and that this fellow made his remarks on a panel hosted by Clarence Thomas’ wife (which would make him a panelist, not a speaker, but I’ll use the article’s term). Of course, the Breitbart speakers may not have said anything distinctly pro-Trump, since the reporter tells us nothing about their remarks. The Putin conspiracist sounds paranoically pro-Trump, but his views diverge from those of the leader, who’s quite comfortable with Russia. The reporter did find a booth run by an organization of European ethno-nationalist parties, including those of Marine Le Pen and Geert Wilders. Of course, that group may have been at last year’s CPAC, which predated the Trump ascendance. The article doesn’t say. We do hear about attendees’ views regarding campus speech issues. But that’s a topic the right was fretting about before Trump came along.

Typically, a conservative writer did a better job with the same assignment. Tim Alberta, a National Review alum, wrote up CPAC for Politico and found the American right going full Cabaret. Remember how brown shirts multiplied at the Kit Kat Klub? Well, take a look at the Gaylord National Resort & Convention Center. “Last year the Make America Great Again hats were few and far between,” says a young attendee. “Now they’re everywhere. Last year the speakers were attacking him and now everyone’s done a full 180. They’re all on the bandwagon. Everything has changed.” The article also tells of a straw poll taken at the conference (80 percent say Trump’s “realigning the conservative movement”), and we hear about the tragicomic incident in which liberal nogoodniks handed attendees little Russian flags, which the attendees then waved. The flags had Trump’s name on them, so the poor dopes figured everything was okay.

A year ago Trump couldn’t even show his face at CPAC. He’d spoken at the conference every year since 2011. But in 2016 he broke his streak to hold what a campaign press release described as a major rally in “Witchita, Kansas.” CPAC greeted the news with a tart comment on Twitter: “Very disappointed @realDonaldTrump has decided at the last minute to drop out of #CPAC -- his choice sends a clear message to conservatives.” Trump played it cool. His campaign said he thanked the team at CPAC “and looks forward to returning to [sic] next year, hopefully as President of the United States.”

Looking back from 2017, Politico’s Alberta replays matters this way: “Only a year ago, CPAC attendees—the majority of whom supported either Ted Cruz or Marco Rubio—threatened a mass boycott of Trump’s scheduled speech. He ultimately cancelled his appearance, and conservatives in attendance roared with approval whenever one of the speakers lambasted the man who, to their great dismay, had emerged as the Republican presidential front-runner.” That sounds like the cancellation occurred because of the walkout threat. At the time, CPAC’s head pointed to a different but similar explanation, namely that Trump didn’t want to take questions after his speech. Either way the attendees’ probable mood seems to have scared off the big man.

Now he’s brave again. “I wouldn't miss a chance to talk to my friends,” he told this year’s gathering. “These are my friends.” Some of them will wave anything with his name on it, and the vista is filled with red hats. Does tomorrow belong to him? The executive branch does, and so do the fellows at the Gaylord National Resort. That’s a start.