The past one was a lulu. 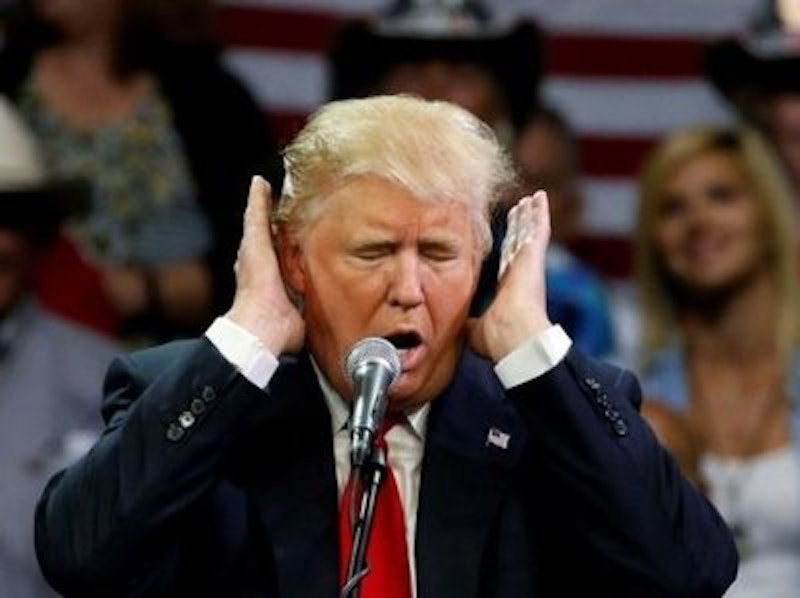 For President Trump, bad weeks come and go, mostly of his own making. Only television ratings matter, and watching a president splutter and tank is irresistible, which pushes the numbers even higher among Trump’s WrestleMania crowd. Trump’s performance has little to do with governing, but, then, crowd-pleasing is what Trump is all about. Here’s a sampler of how Trump’s recent week went:

Pollsters have now quantified what many people suspected and even more privately believed: President Trump is an “asshole.” That pejorative was among the top 10 words average Americans used to describe Trump in a recent survey. To provide balance, the favored descriptions also included positive words such as “strong” and “determined.” Read into those last two whatever you wish.

The word association question was part of a recent broader Washington Post-ABC News survey in which voters gave Trump an overall negative rating, a Bronx cheer sendoff to one of the worst weeks of Trump’s eight-month presidency. This section of the poll appeared on the Post’s website but not in print editions (at least not the one delivered in Baltimore.) The same poll has Trump flatlined in negative territory, stuck at a bottom-feeding 39 percent approval. But have no fear. The Secret Service won’t swoop down and confiscate computers. They’re voters, too. Besides, they’re sworn to protect Trump.

Asked what one word best sums up Trump, the Post’s charts group words in similar categories: “The Top group at nine percent described Trump as ‘strong,’ ‘determined’ or ‘bold.’ But three or the top five categories include far harsher words, including ‘arrogant,’ ‘incompetent’ and ’idiotic,’ each chosen by between six and eight percent” of those surveyed.

“Another six percent praise Trump as ‘good, ‘great or the ‘greatest,’ but the rest of the top 10 categories tilt more negative, going from ‘bad’ to ‘buffoon’ to a word that starts with ‘a’ and ends with ‘hole.’ Some two percent call Trump a racist or a Nazi…” So began Trump’s week.

By the time you read this, the clock will have run out on Republicans’ latest attempt—nobody’s even bothering to count any longer—to repeal the Affordable Care Act (Obamacare). It was done in by an arcane procedural maneuver called reconciliation that expired Sept. 30. Reconciliation reduces the number of votes needed to pass fiscal measures to a simple majority of 51 instead of a supermajority of 60 by prohibiting filibusters and limiting debates and amendments. Reconciliation was invoked by Democrats under President Obama to allow confirmation of low-level appellate judges. Republicans allowed to it stand rather than revert back to the 60-vote option.

Senate Republicans called off a vote on the ACA when they couldn’t muster a simple majority after three of the 52 GOP senators said they would not vote for passage of the bill. It was a roundhouse defeat for Trump as well as for Senate Majority Leader Mitch McConnell in a week that was packed with setbacks for Republicans who badly needed a legislative victory. They are now looking, at tax cuts (mainly for Trump’s tax bracket family and friends, and the usual one-percenters) for that toast.

The ACA repeal would have deconstructed Obamacare by allowing the states to manage healthcare and its funding through block grants and eventually ending Medicare expansion funding for the states, a keystone of Obamacare. The repeal bill would have had the effect of creating 50 different levels of health care, ending the ban on pre-existing conditions and allowing the states to set costs according to health care needs. This would have allowed insurance companies to sell policies that would be essentially worthless to patients with catastrophic health problems—those that Trump had promised to protect.

Continuing his steady decline and fall, Trump had his ass handed to him in the Alabama Senate runoff election. The shiv was administered by, of all seditious people, has former chief strategist, Stephen Bannon. Trump had been dragged by GOP oligarchs, against his instincts and will, into supporting Sen. Luther Strange for nomination to a full term in the Senate seat formerly occupied by Jeff Sessions, now attorney general.

But in another one of those atrocities that is committed in the name of Christ, the twice-defrocked Judge Roy Moore, who believes the Bible supersedes the Constitution as a governing document, was nominated over Strange by the very same evangelical Christian base that Trump claims as his own. Moore, who declaims his Second Amendment rights by brandishing a handgun at political rallies, was supported by Bannon and his raging alt-right website Breitbart News.

On the morning after the election, Trump tweeted the obligatory suck-up: “Spoke to Roy Moore of Alabama last night for the first time. Sounds like a really great guy who ran a fantastic race.”

The widening chasm within the Republican party has heartened Democrats, who now believe they have a chance of winning a seat that hasn’t gone to their party in nearly three decades. Their candidate is Doug Jones, a former U.S. attorney who prosecuted KKK members in the bombing of a black church in 1963, killing four girls.

Standing for the National Anthem is a custom and not a legal or moral requirement. The custom began in 1891—before “The Star-Spangled Banner” was even declared America’s patriotic love song—at the United States Military Academy at West Point. It wasn’t until 2009 that National Football League players adopted the custom of standing during pre-game renditions of the song.

But Trump stepped in a pile of it again. He criticized, in tweets and speeches, players who take a knee as unpatriotic and disrespectful to America’s military men and women. He even went so far as to refer to an anonymous kneeler as a “sonofabitch” who ought to be fired, electrifying his Duck Dynasty audience but angering the entire league of players and owners. By the following weekend, what began last year as a lonely protest against police violence by quarterback Colin Kaepernick, spread throughout the NFL as a counter-protest against Trump.

As a matter of history, “The Star-Spangled Banner” was designated America’s national anthem by the president in 1916, and by Congress in 1931. Members of the military began standing in the 1900s, and fans at baseball games adopted the custom in 1916. It was Sen. Julius Burrows, a Michigan Republican from 1905-11, who began encouraging audiences to stand during its playing.

The Trump Administration has been harshly criticized for paying less attention to hurricane-lashed Puerto Rico than the mainland states of Texas, Louisiana and Florida. Reacting, as usual, with his mouth instead of help, Trump credited himself and his people for an “incredible” job while criticizing those who criticized him. But the mayor of San Juan disagreed. Carmen Yulin Cruz gave Trump a public dressing-down for the federal government’s slow-motion response, punctuating it several times with the mournful cry, “We are dying.” Trump knee-jerked blindly back: “Such poor leadership ability by the mayor of San Juan… They want everything done for them.” But it took Trump’s nemesis, Hillary Clinton, to motivate the administration, by Twitter, of all ironic venues, into dispatching the hospital ship Comfort to the stricken island, a U.S. territory.

Puerto Rico is without electricity, drinking water, food, gasoline and medical supplies, much of it piled up on docks and unable to reach the needy and isolated people. Following the severe criticism, Trump began sending military aid and supplies by sea and air, and suspended the obscure Jones Law, which will allow an unlimited number of foreign ships to carry essential needs into the devastated island’s ports. Trump is scheduled to visit Puerto Rico to survey Hurricane Maria’s mighty trail of damage.

The Trump Administration’s flying high. At least three, and now maybe four, of Trump’s cabinet members’ travel habits are (were) under review for abusing government travel privileges. Environmental Protection Agency Administrator Scott Pruitt cost taxpayers at least $58,000 by using noncommercial and military flights. Health and Human Services Secretary Tom Price spent $400,000 of public money to pay for private flights. And Treasury Secretary Steven Mnuchin used a government plane for private purposes for him and his new wife, actress Louise Linton—to view the eclipse from a Kentucky vantage point. Mnuchin had requested a military plane for their European honeymoon but later changed his mind.

Trump had expressed his ire publicly, especially about Price, saying “I’m not happy about it, and I let him know it.” Price had said he’d write a personal check for his cost of a seat on the charter flights, about $52,000, a fraction of the $400,000 the private flights cost. But in another Friday evening dump, Price was pressured to walk the plank, to clear the “optics,” to use Trump’s word. Price announced his resignation as HHS secretary in a bittersweet farewell letter.