Straight talk about the conscience of the right. 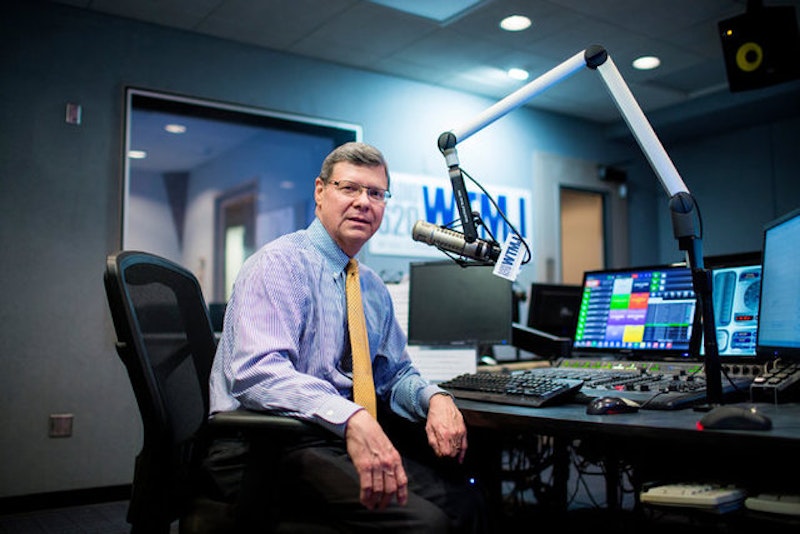 Charlie Sykes is a conservative that liberals go for. He’s against Donald Trump, and he has a thatch of thoughtful white hair sitting atop his glasses and square jaw. But I’ve read what he had to say in Newsweek about conservatives and the rise of Trump, and as a liberal I must protest. Why did conservatives sign up for the Trump disaster? Sykes pauses to take a deep breath. “Decades of liberal contempt,” he begins, “including the almost reflexive dismissal of conservatives as ignorant racists, had created deep antipathy on the right.” Conservatives elected a hero of white supremacists because liberals had a look on their face. This is like listening to a husband tell his wife that, yes, he’s the reason that she has gonorrhea, but none of this would’ve happened if she weren’t so judgmental.

Sykes tells us that, “during the Obama years in particular, many conservatives felt attacked.” He records somberly that the Democrats passed Obamacare and the stimulus bill even though Republicans voted against them. It’s a dark time that he depicts, a time “when conservatives felt their free speech and religious liberty were under assault, when the Internal Revenue Service was targeting Tea Party groups,” and so on (the rest is about microaggressions and safe spaces). Note that his list has just one item directly concerning the right. That item, the supposed IRS persecution, appears to be fictional. An inspector general employed by Steve Mnuchin’s Treasury Department just informed us that 146 liberal groups were also targeted. The Obama IRS searched for names with “Tea Party,” “Patriot,” or “9/12,” but also for names with “Progressive,” “Green Energy,” “Medical Marijuana,” or “Occupy.” ACORN was a special black mark. “IRS personnel were told starting in 2010 to watch out for groups that had affiliations with ACORN,” says The Washington Post, which reports on the inspector general’s findings.

The other examples of attacks are notable for not being attacks. Apparently, Republicans feel assaulted if they hear about safe spaces or if the other side gets a bill through Congress. One might object to safe spaces, Obamacare, and the stimulus package. At a stretch, one might be alarmed by them. But being alarmed isn’t the same as being attacked. Feeling attacked isn’t the same either. Note that the nervy mindset described here isn’t presented by Sykes as a sign of malfunction. The malfunction, the right’s screw-up and culpability, was dealt with in the article’s first half. Now the article has reached the “to be sure” phase, introduced this way: “There is, of course, another side to the story of how the right lost its mind.” And then we segue into the Obama nightmare, when conservatives felt “attacked” by the stimulus bill. The right was driven into the arms of Donald Trump by college kids and the sight of a functioning Democratic administration.

Well, sorry you were triggered. As Sykes admits (in tamer language), the American right spends most of its time scratching itself into a state of delirium, a luxurious mental realm of purple outrage and exalted panic. I’ll stipulate that this habit includes not just the GOP’s base and their entertainers, but respectable pundits and a good deal of politicians. They’ll make some awfully dumb decisions rather than give up the High Noon that plays in their heads. The right invented a menace in Iraq and had us invade. Then it decided that Obamacare would enslave America, so the GOP jammed Congress’ gears.

Now a thug’s in the White House because voters thought that would make the government work. The Sykes party not only created the conditions for the thug’s ascent, it also nominated him and pushed for his election. This last contribution—actually getting in there and trying to make this particular man president—was too much for Sykes and he got off the bus. Now, to continue the metaphor, he knows there’s something wrong with the route, because look at the destination. He’s trying to figure out what the problem is, and he’s pretty sure it traces back to liberals. When I think about why conservatives and Trump found each other, I’ll think back to this article. But Charlie Sykes might not understand why.