Trump’s Authoritarian Stubbornness Will Be His Undoing 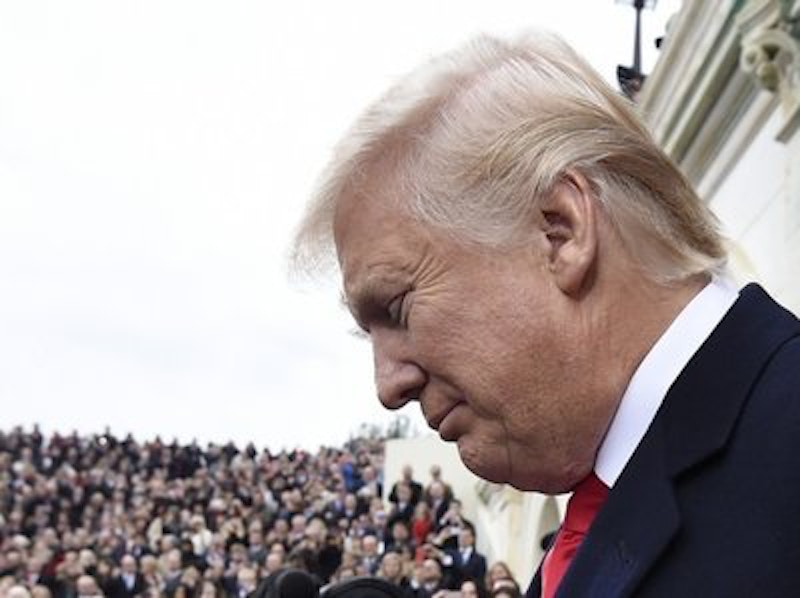 There are two kinds of people in America: Those who believe that President Donald J. Trump’s base will wise up to his fraudulent promises and turn against him; and those who believe Trump’s supporters will arm themselves and defend him to the end. And then there are those like Maryland Gov. Larry Hogan (R) who seek political cover by refusing to take a position on anything Trump, forgetting that there’s a special place reserved in Dante’s hell for those who remain neutral in times of moral crisis.

Now more than two months into the most disastrous opening act of any new presidency in modern history, the first statistical evidence of Trump’s performance is beginning to dribble in—and the news is bad enough to provoke a Twitter tantrum. Trump’s in the red zone and slipping rapidly, unable to get a grip on the presidency or reality.

First, the latest Quinnipiac University poll. It reveals Trump’s base turning against him, slowly but surely, by degrees. Trump’s approval rating stands at 41 percent, well below the magic marker of 50 percent, while his disapproval rating is underwater at 52 percent. But the details illuminate the base’s abandonment. The slippage in the poll numbers is among the very people who helped to elect Trump—Republicans, white voters and men.

There are more discouraging numbers for Trump in the Quinnipiac survey: 60 percent of those polled believe Trump is not honest while 55 percent think Trump, as president, lacks leadership skills. Even more damaging is the poll’s finding that 39 percent of Republicans do not believe Trump’s claim that his predecessor, Barack Obama, wiretapped him. As supporting evidence, Trump lacked the political heft, or even his self-proclaimed negotiating skills, to muscle the Republican health care overhaul off its deathbed. His bullying didn’t frighten a single Congressional holdout or change a vote. The Art of the Deal failed its first major test in a humiliating defeat for Trump and House Speaker Paul Ryan. They were unable to unite their own majority Republican party to pass its signature issue. And having to pull the health care bill rather than face defeat sets up a test of Ryan’s future effectiveness as speaker. Worse, for Trump, is that a major campaign promise is left unfulfilled. His bluff didn’t work. Typically, Trump, in phone calls to major news outlets, attempted to blame Democrats for his ineffectiveness and failure to deliver on his first major encounter with Congress.

As if those Quinnipiac poll numbers weren’t bad enough, the latest Gallup poll has Trump’s favorability rating at an uncomfortable 37 percent. So, whoever believes Trump’s base will stick with him to the bitter end might have that thought come back to bite them.

A fresh Washington Post/University of Maryland survey nails the fact that any identification or association with Trump can leave a damaging, if not indelible, stain. It shows that Hogan’s personal popularity, by association, is being dragged down by Trump’s sub-par performance in the White House. In a state where Democrats outnumber Republicans by more than two-one, Hogan has been under constant assault by Democrats during the 90-day legislative session to tie Hogan to Trump’s policies. Hogan has refused to take the bait, repeatedly declining to support or oppose the policies or the man he refused to support for president—not even the Chesapeake Bay cleanup or the health care bill that could have cost Maryland billions.

Yet the mere identification with Trump and the Republican Party is having a negative effect on Hogan. His job approval rating in The Washington Post/University of Maryland poll is down from a stratospheric 71 percent last year to 66 percent, not a free-fall but an early indication that if Trump continues on his present ship-wreck course he can cause serious problems for Republican candidates in the 2018 elections, especially in a state that Hillary Clinton carried by 26 points. So, despite Hogan’s ambivalence and downright avoidance toward Trump, he’s tainted by the fallout nonetheless. He might be better off behaving like a Democrat in a thoroughly Democratic state. Still, Democrats have yet to put forth a singular big-foot candidate for governor.

Trump’s problems are many, beginning with himself. And whenever the White House appears ready to collapse on him, Trump arranges an ego-boosting, cheerleading rally in a benighted state that supported him, most recently Kentucky. Or he scoots off to the gilded halls of Mar-a-Lago, his Florida resort, for a weekend at a cost to the taxpayers of $3 million per trip, nearly every weekend since he took office on January 20. The Secret Service, as reported, has requested a budget increase of $60 million—$26.8 million to secure Trump Tower alone where his wife and young son live—to cover the jet-setting lifestyle of Trump and his family, much of it having to do with Trump family business from which he presumably benefits and refuses to separate himself.

Trump’s behavior, to say the least, is bizarre, from the fusillade of inane and ungrammatical Tweets to the paranoid but baseless claim that Obama had him or his suite at Trump Tower wiretapped during the 2016 campaign. Trump supporters appear to be catching on to the prospect that their candidate might be slightly unhinged, or even delusional. Or, as The New York Times expressed it, Trump appears angered over his “inability to control the narrative of his presidency.” He has been overwhelmed not only by the presidency but by negative events of his own creation.

The visible loss of faith in Trump by his supporters begins with growing evidence, backed by the testimony of FBI director James B. Comey, of connections between Russian interlopers and Trump’s tight little circle of campaign aides to manipulate the 2016 presidential election in Trump’s favor. There were disputes over the size of the inaugural crowd, charges of fake news (stories he didn’t like), accusations that a British spy agency provided the wiretap at Trump Tower—baseless positions that led PolitiFact, a fact-checking organization, to conclude that “76 percent of Trump’s statements are mostly false, false or pants on fire.” Put another way, Trump has no credibility whatsoever.

The accumulation of evidence is the major grievance that is separating Trump supporters from their populist superhero of a year ago. The wall he promised to partition off Mexico is being financed out of Trump’s federal budget and not Mexico’s; the unproven charge of voter fraud; the repeal of the Affordable Care Act (Obamacare), which Trump supported, was a tax bill in disguise that would have benefited the wealthy and dispossessed the poor—an ornamental collection of tax breaks for the rich, the insurance companies, the pharmaceutical industry and the medical equipment manufacturers; Trump has lied about his connections to Russia; his secretary of state, Rex Tillerson, is boycotting a NATO meeting in favor of a trip to Moscow; the Trump Administration’s taunting of North Korea;  at least four of his campaign aides and advisers are under investigation; and his repeated praise of Vladimir Putin adds to the suspicion that something’s amiss.

Republicans had seven years to craft a workable replacement for Obamacare, and they failed disastrously, only to try and assemble a patchwork bill days before a scheduled vote, and to pull the bill when the votes fell short. The more House Republican leaders complicated the bill the less likely its chance of passage by the Senate. Frustrated and anxious for a legislative victory, Trump ordered an up-or-down vote. Only an inexperienced dilettante calls for a vote when he doesn’t have the votes. And now Trump wants to move on with the business of tax cuts, another gift to the rich from the poor.

What ultimately may be Trump’s undoing, however, is his own authoritarian stubbornness. At the top of the heap of his problems is the brooding presence of Russia and his pretense that it doesn’t exist. The twin investigations by the FBI and by Congress are likely to drag out for months. Along with that are his business entanglements which he dismisses as the prerogative of presidents. And finally, there will be an outcry over the lavish spending on ferrying Trump family members around the globe by the same administration that tried to deny health care to poor people. Trump hoodwinked the voters once, and the odds are that it may not happen again—especially from a president who can’t keep his promises.