Andy Kindler’s Right at Home in the Post-Truth Era

He reveals stunning ignorance, arrogance, and incoherence in interview with Josh Zepps. 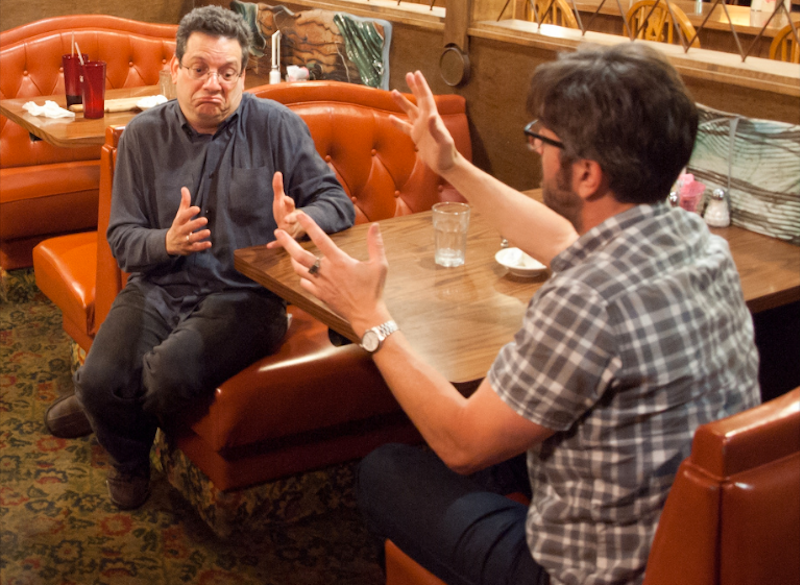 Andy Kindler, who used to appear regularly on David Letterman's Late Night, doesn't like the so-called New Atheists. They're all bigots in his obsessive mind, which for some time now has been fixated on writer and thinker Sam Harris. An analysis of Kindler’s Twitter account reveals that Harris and his fellow New Atheist Bill Maher are his two most mentioned Twitter users, and that “bigot” is one of his favorite words. Recently, Harris finally decided to push back by tweeting, “Why is Andy Kindler attacking me? This takes a lot of energy.” Kindler responded, “The man who says Islam is the mother lode of bad ideas likes to pretend he's not a bigot.”

One segment of the Twitter world lit up quickly. New Atheist vs. Regressive Leftist always makes for good social media theater. This led to Kindler’s hyperventilating March 24 appearance on Josh Zepps' podcast, We The People, Live. The comedian came out swinging, instantly labeling Harris and Maher as “bigots” who helped get Trump elected. “If you judge people based on their religious affiliation,” Kindler told Zepps, “that's insane.” He didn't name any instances where Harris had judged Muslims personally.

Zepps asked Kindler if you could criticize a belief system without being called a bigot. “I criticize everything,” said Kindler. “I never thought I'd be defending organized religion.” He told Zepps everything should be criticized, including religion, but that doesn't mean you can use it to “justify rank bigotry.” If listeners were expecting a concrete example of Harris’ bigotry, they'd have been disappointed.

Zepps suggested that Kindler might have seen a five-minute clip of Maher's show, when Harris said Islam is the “motherlode of bad ideas,” and had interpreted it as “rank bigotry.” His podcast guest said no, that he'd also seen Harris interact with people online. Listeners expected something concrete, but Kindler still provided no evidence of Harris’ bigotry. Instead, he rambled on some more about Jews being just as much of a terrorist threat as Muslims. “The whole idea that you need a white atheist guy to interpret the Qur'an for you, that's what I object to, he said. Kindler added, “The whole thing that there's a radical Islam, I think that's right-wing political nonsense.” For the truth on Islam, he said he'd turn to Reza Aslan, who’s a “religious scholar,” over a—returning to skin color again—“white neuroscientist atheist.” Aslan once said, “Women in Indonesia are 100% equal to men,” a ludicrous statement for which he received tremendous ridicule.

The comedian admitted he didn't know enough about Islam to make any real arguments, which is why he relies on Aslan, who regularly presents a whitewashed version of his own religion. Kindler told Zepps that he personally didn't know any Muslims who are fans of Al Qaeda or terrorists, to which the host replied, “The reason you don't know anyone who supports Sharia law or jihadists is you're a Jew who lives in Los Angeles. Kindler’s reply: “Don't blame it on Muhammad!” Another non sequitur.

Kindler had a hard time staying on topic or making even a coherent point. Zepps—who was obviously frustrated with his guest's bloviating—read part of an email Sam Harris had just sent him. In it, Harris complained that Kindler had been defaming him for years as a bigot, and had viciously attacked anyone coming to his defense. Kindler started screaming that Harris was a bigot. “Sue me, Sam Harris, sue me!” he yelled.

It got worse. Zepps said that that argument wasn't likely to sway many objective observers. Incredibly, Kindler told him he wasn't there to debate anything. When Zepps had finished reading the email, he asked Kindler for his response. “Dear Sam, blow me,” the 60-year-old comic said. Then he called him a bigot and asked him to accept that people hate what he does. Unable to comprehend that Harris’ reference to defamation wasn't a legal threat, the comedian accused him bullying him with the hint of a lawsuit.

And then the inevitable happened. Kindler told everyone that he was a “good person” who hates prejudice. Then: “I'm not an expert in anything except in what I believe in I believe in very strongly.” That’s Kindler in a nutshell. He thinks that emotions are valid currency in a rational discussion, which makes him right at home in the nascent post-truth era, when people talking over each other is becoming the default method of “communication.”

During the interview, Kindler told Zepps that “making blanket statements about people” is going to lead to Muslims getting rounded up like the Jews in Nazi Germany if people don't speak out. He appears sincere in this belief—while unable to perceive the irony of railing against blanket statements—meaning he sees himself on a crusade to fend off another Holocaust. In full panic mode, his emotions have reached such a crescendo that rational thought now eludes him. Anyone who publicly states that there's no radical Islam is right there on the crazy scale with Alex Jones.

Blinded by what Kindler calls his passion, he thinks people like Sam Harris helped elect the “Nazi dictator” Trump, when it's actually people like himself who call people bigots without thinking they have to offer any evidence. He's also hurting the cause of Muslim reform by making people afraid to speak out. Kindler's the perfect example of the self-proclaimed “good person” who just makes things worse.