The GOP Just Had Its Test and It Failed

The fart of the deal. 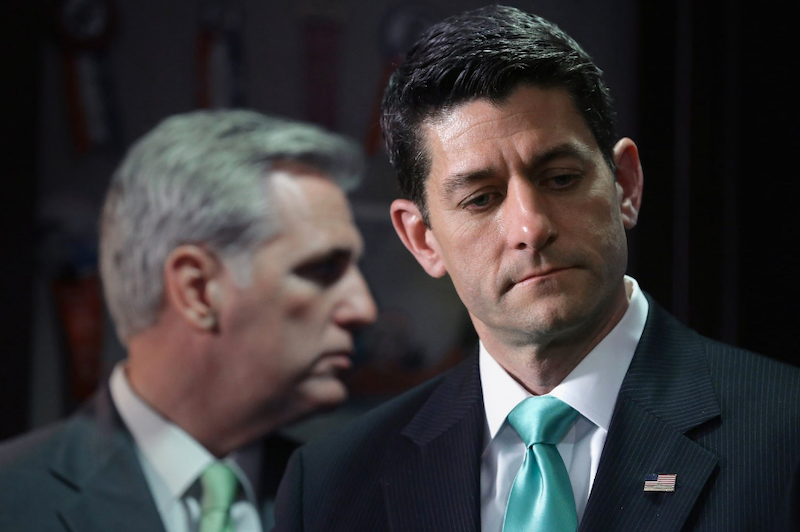 “The fact is that, you know, you came out of the gate and you stumbled,” says a thoughtful Rep. Mike Coffman. The Colorado Republican may be too limited in his views. He’s thinking about the Trump administration, such as it is. Jennifer Rubin, Republican cheerleader and Washington Post blogger, goes a bit wider.

The Ryancare fiasco, Rubin says, “has revealed how dreadful the GOP is when it comes to governing.” Did I say Republican cheerleader? Well, within limits. She loved Mitt Romney until he lost. She loved the GOP until it had to do something besides bitch. For any adult fan of the party, the GOP in 2017 is like your comic book collection when you turn 14. You look at it and realize you’ve lost a lot of time.

To recap: for seven years the Republican Party—everybody in it, high and low, establishment and outsider—said Obamacare was a disgrace and had to go. Finally they took power: presidency, House, and the Senate. They teed up Obamacare and prepared to take a whack. Then the golf club wound up around their neck. Why? Because 20 or 30 congressmen figured there should be no subsidies, no rules, just insurers selling insurance. While all the other congressmen figured that was crazy. The 20 or 30 believed in that no-government stuff, the rest knew it was a crock. If the government took a walk, these people had constituents who were going to die. They knew Washington had to keep its finger on the health care market. But how?

Hence Ryancare, the contraption that wasn’t a free market but wasn’t Obamacare. Yes, the Congressional Budget Office said millions of people would lose coverage under Ryancare. Old people fixing cars in Nebraska would have to sell their homes to pay their premiums. But at least there’d be tax credits, and the companies couldn’t screw you over pre-existing conditions. Go full-barrel free market and the home sellers would be the lucky ones. Officially, of course, the Republican Party believes in the free market above everything. But come on. The guys know that the health care market causes death and bankruptcy unless the government steps in. Except the 20 or 30. They float above these things.

Of course, anybody worried about dead or bankrupt voters has to prefer Obamacare to Ryancare. The first bandages and braces a precarious system; the second would’ve been, at best, a piece of masking tape. But Obamacare has the wrong name. The Republicans spent so long battling their make-believe American Mao that they had to strike down his program or look like fools. So they tried and they failed, and now they look like fools who have shit on their face. The reason is simple: their heads are up their ass.

The Republican Party has been devoted to fantasy for 20 years or more. They’ve given up on governing and become an entertainment operation, one with an unlikely dependence on voters. Ryancare was just a piece of pretend, a chance for Republicans to act like legislation is something they do. It isn’t. Paul Ryan is a guy who’s good at looking soulful on TV. He doesn’t know policy, he knows how to make people think he knows policy. Donald Trump can’t close deals; what he can do is bluster. Dumb people decide he’s Mr. Dynamite, which is why he’s now chief executive.

Ryan the insider and Trump the outsider, Ryan the stalwart and Trump the new arrival, Ryan the ideologue and Trump the whatever—they share an address that’s a long way off from reality. The GOP lives there too. All that rugged individual stuff is bullshit. We need government and we especially need it when our bodies are conking out. Everyone knows that except a couple dozen congressmen in safe districts. As they pulled Ryancare toward their views, the other Republicans peeled away, fearful of what voters would do them if the thing went through. Fun’s fun, and the boys had taken their turn decrying Obamacare, that socialist abomination. But when it came time to strike the blow, they knew playtime was over. Get rid of that thing and the voters would kill them, because that thing actually does a lot of good. Republicans can’t admit as much, but they can demonstrate it. That’s what they just did. They also demonstrated they should be nowhere near government. It isn’t what they’re for.