Prepare For an Onslaught of Woke Scolds 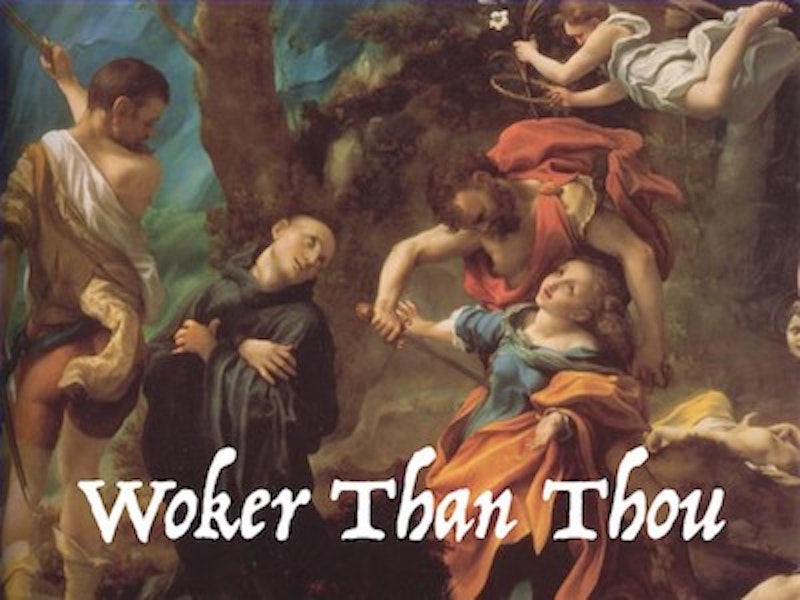 Fallen comedian Louis C.K. is in the hot seat again after, right at the end of 2018, he disparaged some of the prominent survivors of the Parkland, Florida shooting. Progressives lit up social media to express their outrage in a precursor to 2019’s year of the “performatively woke scold (PWS).” Nobody’s safe from them. If they have a chance to score points at your expense, they don’t care who you really are as a person.

Louis C.K. still has a target on his back from his #MeToo offenses, so his every word is parsed. Still, his schtick’s transgressive comedy (he’s even joked about pedophilia), so his negative comments about the Parkland survivors’ sudden promotion to policy experts wasn’t shocking. He has a point. David Hogg does well in front of a camera, but has no particular expertise. His appeal’s emotional, and the media lapped it up. Hogg’s sainthood status in the modern religion of progressivism makes him off limits, so Louis C.K. had to pay the price. They loved him when he was berating Sarah Palin, but now we’re told he’s not funny any more.

PWS types love the concept of white privilege for obvious reasons—it widens the scope of their wokesplaining. When they can’t find actual misdeeds to pounce upon, they remain active by going after people with a particular DNA. Many Democrats woke-scold people for their white privilege because it affords them the opportunity to signal wokeness without having to endorse the progressive political economics of Bernie Sanders and Alexandra Octavio-Cortez that would indisputably improve the lives of the minorities the same Democrats claim to support. Anderson Cooper looked flummoxed as he asked AOC on 60 Minutes how she proposed to pay for all her expansive social programs. He makes $10 million per year for a job many people could do, so her talk of 70 percent tax rates had him rattled. All the vocal Hollywood liberals are in the same boat, but they’re actors, so performative wokeness comes easy to them.

Because Cooper’s fairly representative of progressives, you can expect plenty more performative wokeness. While there’s no question that white privilege exists, there’s no evidence that harping on it is the best way to address disparities between the races. Now the concept of “thin privilege” is garnering attention in the PWS community. According to the BBC, thin privilege “means not dealing with fat shaming when you tuck into a pizza,” although I’m not sure how often that happens. BBC tells us, “We need to start talking about thin privilege.” The article claims that the concept’s gone “mainstream” now, which means mainstream among the relative handful of people obsessed with privilege.

The BBC article quotes a “lingerie blogger,” Cora Harrington, who informs us that you don’t have to be thin to benefit from thin privilege. All that matters is if others perceive you as thin. She wants people to “call out” their own thin privilege, although it’s unclear what that’s supposed to accomplish. A more productive message might be criticizing the people engaging in fat-shaming.

Don Lemon’s a PWS. Comedian Kevin Hart lost his Oscars gig after activists combed his Twitter feed and found some old tweets that were deemed “homophobic”—he was joking about not wanting his son to turn out to be gay. Society’s attitude on the gay issue has evolved rapidly in recent years, but ancient tweets are judged by current standards. Hart deleted the offensive tweets and apologized on Ellen, but the CNN host wasn’t satisfied. Contrast this attitude to Lemon’s response to Joy Reid’s many homophobic tweets that were much more vicious than Hart’s: “She should be given a chance to apologize and move on because I know her and she’s amazing.” In other words, “She’s a progressive woman who I personally know, so she deserves a second chance.”

These scolds—miserable busybodies—are like your old upstairs neighbor who’d go to the landlord if you were playing music after nine p.m. They’re a sign of the current era’s moral panic. Their power’s disproportionate to their numbers. They skew young, and like the power upbraiding others gives them. Their success is made possible by the risk-averse nature of corporate America and college presidents. Until those in power wake up, they’ll continue to terrorize people.