Trump in the Leisure Seat

Impeachment and pretzel logic meant to send Trump to prison will only make him a martyr. 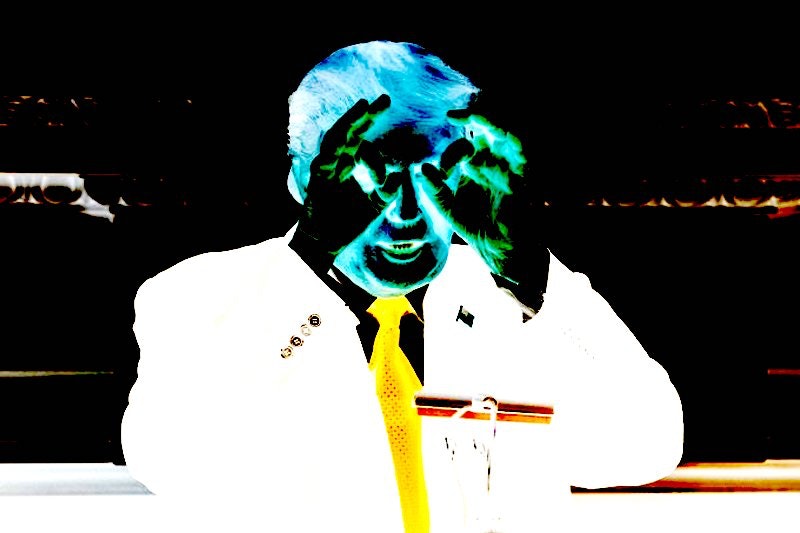 “The top Trump impersonators are asking themselves: What now?” The Telegraph’s story on Sunday about comics small and somewhat less small wasn’t sad, despite the bummer beginning: “Now, though, the New York-based comic [J-L Cauvin] is among a small cadre of mimics who must consider whether they will mothball their acclaimed satiric takes on Trump once he leaves the White House… ‘No one is going to want to see my Donald Trump’ now, [Anthony] Atamanuik says. ‘Anyone who is seeking Trump comedy after Jan. 21, I just feel bad for them.’”

There’s no Vaughan Meader here, and with 25,000 National Guard troops in Washington, DC for the inauguration in two days, the events at the Capitol on January 6 will likely remain the apex of the Trump years. One thing I’m genuinely thankful for is when Trump, during the 2016 GOP primaries, told Jeb Bush that his brother’s administration fucked up with 9/11 and the “War on Terror.” Bush stammered and said something about his brother “keeping our country safe.” Trump responded: “I can think of one day when he didn’t keep us so safe.” God shit.

But that’s all I can say about him above the level of jokes, which have been erased by Twitter but archived forever in deep-fried memes and screenshots across the world. The reality of the Trump administration ending in a matter of days hasn’t hit me or most other people, and the biggest adjustment is going to be the volume and quality of the information coming in after January 21. All signs point to the Biden/Harris administration acting as a corporation, a bureaucracy satisfied with ceremony over material change. The fact that there’s any debate about a $15 minimum wage and the unbelievably cheap move with the $1400 from ostensibly left and liberal people shows how far away from home we are.

Phil Spector died of COVID-19 and we didn’t even get to see his death wig. Oddly enough, I was reading about Robert Blake last night (I always get those two mixed up), who somehow managed to get out of his murder charge on a technicality—well, “no forensic evidence.” Everyone knows he paid someone to shoot his girlfriend while his bodyguard sat with him and provided him an alibi, but Blake got off, probably because of the “CSI effect.” It’s something to say, “He probably killed her” and still acquit. But justice is blind.

Who will Donald Trump pardon in the next few days? Spector, perhaps? Posthumous, of course. Spector should be pardoned for all the grief he got for “ruining” The Beatles’ Let It Be, a fine record in its pungent wall of sound form. Let It Be…Naked isn’t better: that’s an album of demos, and as John Lennon himself said, in a January 1970 interview with Jann Wenner, “[Spector had] always wanted to work with the Beatles… and he was given the shittiest load of badly recorded shit with a lousy feeling to it ever, and he made something out of it. He did a great job.

He did. Let It Be…Naked isn’t good. Fine as a curio, but those are unfinished and incomplete recordings. It’s amazing how Spector still gets (deserved) credit for his wall of sound magic of “Be My Baby” but not something equally as beautiful, like “Across the Universe.” Straphangers lap up Paul’s resentment from being cut out of post-production on the record, agreeing without thinking with his self-serving assessment of the record as a botch job.

Paul was just bitter, confused, frustrated, and scared as shit, by far the most terrified and depressed Beatle after the breakup. He couldn’t admit Spector took shit songs like “The Long and Winding Road” and covered them in glitter and lipstick. If you’re going to write a piano ballad that predicts all of adult contemporary music, then expect it to be slathered in strings and thousands of choral parts, because these things should not be naked and dry, but fabulous, wet, and sticky.

I’m surprised more celebrities haven’t succumbed to COVID-19. Those who’ve fallen—Herman Cain, Allen Garfield, John Prine, Nick Cordero, Siegfried and Roy—aren’t card carrying members of the A-list. Trump got the virus, along with most of his family and associates, and almost everyone has forgotten (I haven’t: I lost $100 when I made a flash bet that he’d be dead by Election Day). When is he getting vaccinated? Can you imagine the person who’s going to have to vaccinate Trump from the novel coronavirus? What’s he going to do on January 21, and for the rest of his life?

TV is about to become much less interesting, especially for him. Who wants to watch Biden stumble over a ribbon cutting ceremony and end up in the hospital with a concussion caused by “feeding the dog”? Kamala Harris is less inviting than a pet cemetery, but maybe Trump will be able to get some perverse psychosexual thrill from watching the incoming Vice President turn her eyes down and look at the camera eye as if she’s about to say “You’re fired.”

That’s only a matter of time: get ready for the Trump puns. This administration believes in nothing but sucking money upward, and they’ll do everything they can to keep people distracted and emotionally abused and weakened enough to not only accept a meager one-time payment of $1400, but to harangue others for demanding more. Americans should be getting $2000 a month, retroactive to last March. It’s understandable why politicians across the spectrum don’t want this to happen, but to see civilians—usually “well educated,” which means they have an expensive degree and zero common sense—defend Biden and Harris’ skimpy offer as “all they can do.”

Get ready to be accused of “being a crypto-fascist” for disagreeing with the Biden administration. Steel yourself against the empty assurances that you’re part of Trump’s “silent majority,” or part of the “post-left,” whatever the fuck that is. It took years for (some) people to acknowledge how comparatively feckless, technocratic, and middling Barack Obama’s actual performance as president contrasted with his image as a living legend. That he is, but now, as then, he stands ignobly in the company of Bill Clinton and George W. Bush (Jimmy Carter, well, he’s a cut above other Presidents, sho is).

Would you be offended from being excluded from a club that included only Bush, Clinton, Obama, and Carter? No, and I suspect Trump is relieved somewhere to be permanently excused from meaningless ceremonies that will bring him zero pleasure, pussy, or money. But those days are past, regardless: unless he flees the country, I imagine Trump will end up facedown in the street, or dragged through an entire city like Muammar Qaddafi in 2011. No, no, no—a liberal’s fantasy, a bloodlust belonging to nothing other than television passions. The rest of Trump’s life will be quiet and uneventful—the exact kind of mild anticlimax that will drive his opponents insane and again create a feeling of “cosmic injustice,” but they should know Trump is a miserable human being and always has been. Isn’t knowing that enough?

What’s he going to do in prison? Die of COVID-19? Be careful making a martyr of the 45th president. The only way to make him recede quietly into the past is to ignore him, but unfortunately we all know that’s never going to happen as long as he lives. And then the rehabilitation will begin.