The conservative polemicist is a nerd, but not a dope. 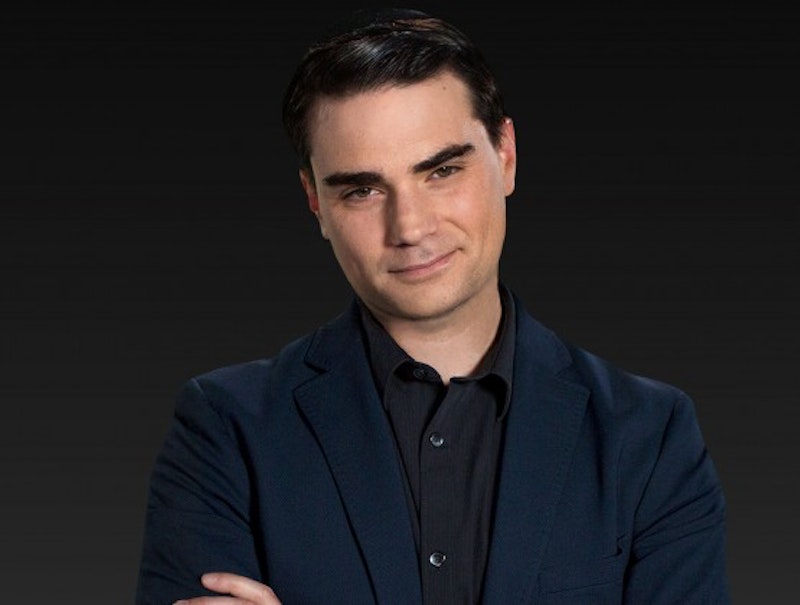 Politico had the ultraconservative pundit Ben Shapiro as a guest writer for its D.C.-insider newsletter, Playbook, last week. The outrage was predictable. Few on the Right have the ability to provoke progressive rage and foolishness like the nasally fast-talker from Los Angeles. When actor and filmmaker Mark Duplass told his fellow liberals to follow Shapiro’s work to get a feel for the conservative point of view, liberals flipped out and forced him to issue a humble apology in order to save his career. That's not an exaggeration. Shapiro made the editors at The Economist, an "esteemed" publication, lose their minds and greenlight a piece calling him, an Orthodox Jew who has to pay people to protect him from thugs associated with the alt-right as he walks to shul on Shabbat, an "alt-right sage" and a "pop idol of the alt-right.” Shapiro then forced The Economist into a humiliating apology.

The Economist then called Shapiro, a culture warrior fighting for his version of morality, a "radical conservative," although he's not all that radical by today's standards. He supports gun rights, wants low taxes, doesn't believe that transgender people can change their sex, and opposes abortion. These are all standard conservative positions. I've listened to a few hundred of Shapiro's podcasts over the past few years to get a better understanding of the conservative thought process. Relying on the mainstream media to interpret it for me, which is what almost all non-conservatives do, wasn't working.

Shapiro's an annoying goody two shoes—a virgin until his wedding night—with a lazy penchant for calling his political opponents (in particular, liberal icons) "garbage people," but I don't listen to his podcast as a fan. Sometimes he deserves his "pariah" status, such as when he tweeted this on Trayvon Martin's birthday: "Trayvon Martin would have turned 21 today if he hadn’t taken a man’s head and beaten it on the pavement before being shot.”

Shapiro’s a provocateur, but why would anyone think that it's acceptable to talk like this about a 17-year-old who went out at night, not looking for trouble, and got shot to death? Statements like this give many the impression that Shapiro's a racist, along with, for example, this tweet: "Israelis like to build. Arabs like to bomb crap and live in open sewage." Still, nothing I've heard him say on his podcast makes me think he's a racist.

Approximately 250 disgruntled Politico staffers had a Zoom call to air their grievances after the Shapiro piece ran, because that's what happens now. Younger staffers in The New York Times newsroom were up in arms last June after the editor of the newspaper's editorial page, James Bennet, ran a controversial piece—"Send In The Troops"—by Republican Senator Tom Cotton. Some of them claimed that the op-ed had put their lives in danger, which was ludicrous, but Bennet was forced to resign.

Washington Post columnist Jennifer Rubin, who's prone to hyperventilation, practically called Politico's "white male editor" a murderer for giving Shapiro a platform. "People who pay the price," she tweeted, "are the victims of the terrorist violence." That's about as credible as Times staffers thinking the Tom Cotton piece had endangered their lives. By singling out the editor as a "white male," Rubin was adding millions of Americans to the "untouchable" category that Shapiro's in among progressives, which is hardly responsible journalism. As a privileged white person herself, Rubin puts herself on a high horse.

The Daily Beast reported that Politico employees were irate that Shapiro's column, which defended those Republicans refusing to go along with Trump's latest impeachment, ran on the day after Congress voted to impeach him for the second time. These are journalists who believe their employer should only cover one side of the impeachment debate.

The first sentence of Nathan Robinson's dismissal of Shapiro in Current Affairs is indicative of a common attitude among progressives: "It’s easy to laugh, as some of us do, at the phrase 'conservative intellectual.'" Robinson struggles with the concept that someone could be both a conservative and an intellectual, and to buttress his argument he mentions Milo Yiannopoulos and Dinesh D'Souza instead of conservative intellectuals such as Thomas Sowell and Douglas Murray. The pompous writer calls himself "intellectually serious" while dismissing Shapiro as not very smart, although he was smart enough to graduate from Harvard Law School. What "dispirited" Robinson about Shapiro is "that he’s clearly not actually very interested in facts," as evidenced by his use of only the statistics that support his own thesis. In fact, this is exactly what every single political commentator does, and it's what Robinson did in his Current Affairs piece, in which he included every negative thing he could find about Shapiro and not one positive.

Shapiro, unlike many conservative pundits, has never rubber-stamped Trump. On the day after the election in November, he tweeted: "No, Trump has not already won the election, and it is deeply irresponsible for him to say he has." The podcast host didn't even vote for Trump, due to his concerns about the president's character.

In an article Zack Beauchamp wrote for Vox to explain why Mark Duplass was right to apologize (he didn't mention it was done under the threat of being blackballed), he provides a list of "reprehensible" things Shapiro's said that are "too offensive or too ignorant to be acceptable in polite company." One of them is that he called Barack Obama a "philosophical fascist." Democrats have called Trump and Republicans fascists and racists since Trump got elected, but when Shapiro says it, it's reprehensible and can't be mentioned in polite company?