Hogan’s snub could cost his state in federal dollars. 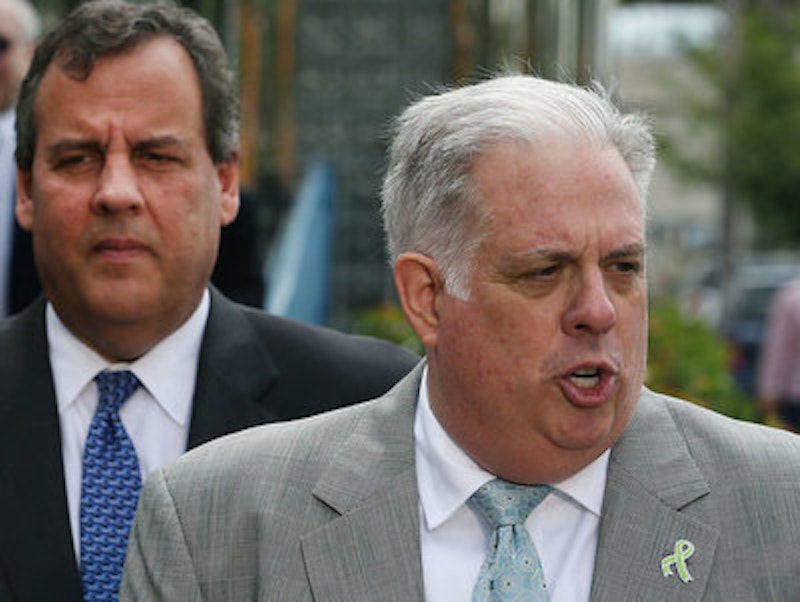 That sprawling red blotch covering most of the electoral map is the greatest land grab since Herbert Hoover and the Republicans stormed Washington in 1928. At the same time, the Democrats have retained the allegiance of the masses huddled in the few remaining blue states at the map’s coastal margins. The new political equation, for however long it holds, is geography vs. people. Hillary Clinton may have won the popular vote but Donald Trump owns the map.

To give the trope practical context, Republicans now control 33 of the nation’s 50 governorships (with North Carolina still undecided) and 32 state legislatures, which gives the GOP a head start on legislative redistricting and control of the House of Representatives into the foreseeable future. And that’s in addition to the White House, Congress and eventually the Supreme Court, where Trump will have one immediate appointment and eventually as many as four. Blame yourself if you voted for Gary Johnson or Jill Stein.

In the recent elections, Democrats fell far short of expectations and wildly assorted predictions. They lost three governorships (Missouri, New Hampshire and Vermont), but picked up two Senate seats and six seats in the House. Democrats are now extinct in the south, as President Lyndon Johnson predicted when he signed the Civil Rights Act in 1964, and many white Democrats in rust belt states have abandoned the party for what might be a cynical deception.

But in Maryland, the status quo is the predictable and the comfortable. The state sent its usual complement of Democrats to Washington with the lone exception of Republican Rep. Andy Harris, who was, nonetheless, smacked down in his attempt to spread his wings within the House Republican caucus. Harris lost his bid to become chairman of the in-house think tank, the Republican Study Committee, which considers and defends hard-core conservative values.

Maryland’s popular Republican governor, Larry Hogan, was unable to transfer his mojo to down-ballot candidates in the few instances where he tried, proving once again, as with the similar case of President Barack Obama, that individual popularity and followers are not usually fungible commodities. Hogan had endorsed Kathy Szeliga for the U.S. Senate, who lost to Rep. Chris Van Hollen 1.48 million to 898,902, and Amie Hoeber for Congress, who lost to Rep. John Delany by 10 points. The election bonus for Maryland is that Van Hollen will replace Sen. Barbara Mikulski on the powerful Appropriations Committee, enabling him to continue steering money to Maryland in the Mikulski tradition.

But Hogan committed another, more grievous transgression which could have punishing effects on him as well as on the state he governs. He punked the president-elect. What’s more, his friend, mentor and possible lifeline to the White House, Gov. Chris Christie (R-NJ), has been devalued and banished from Trump’s inner circle, if not from Trump Tower itself. Over the course of the campaign, Hogan denounced Trump, refused to attend the Republican National Convention and, as the final stiletto between the shoulder blades, bragged that he wrote in his father’s name for president (it’s the same as his.) This may endear him  to Maryland Democrats but not with the incoming White House. Shortly thereafter, Hogan was soliciting Trump’s patronage for relocating the new job-rich FBI headquarters in Prince George’s County which, Hogan said, “should be a slam dunk.” (Note to Hogan: Trump values loyalty above all else.) Trump lost Maryland by nearly two-one, and Hogan didn’t lift a finger to try and tip the results.

Trouble may lurk indirectly and briefly for Maryland within the House of Representatives’ sclerotic leadership ranks, where the two top Democrats have strong Maryland bloodlines. There is agitation among many young, restless members that Minority Leader Nancy Pelosi, a Baltimore native, and her deputy, Rep. Steny Hoyer, of Southern Maryland, are out of touch and have failed to re-build the party’s shrunken House ranks. Both have been responsible for Congress’ generous treatment of Maryland. After 14 years as leader of the House Democrats, Pelosi is being challenged by a young upstart, Rep. Tim Ryan, of Ohio. Such are the temblors of change that Pelosi delayed the customary Democratic caucus elections until after Thanksgiving for an arm-twisting round-up of votes against the longshot challenge. Pelosi and Hoyer excel at gathering votes.

At the local level, departing Baltimore Mayor Stephanie Rawlings-Blake is defiant over Trump’s promise to crack down on sanctuary cities and immigrants in general. Rawlings-Blake has promised that immigrants will always be welcome in Baltimore as a way of repopulating the city and will be able to move about freely without being hassled by police to produce papers validating their legitimacy in the city.

Geography is money. There are 145,300 federal employees in Maryland, or 5.5 percent of the state’s total workforce. Maryland is the third highest recipient of federal dollars after Virginia and Alaska. It comes in many ways and forms, mainly through the 20 federal agencies and 15 military installations located in the state. Much of the federal largesse flowing to Maryland is because the state’s joined at the hip with the nation’s capital. Thus, Maryland receives the fifth highest defense spending of any state and it receives more non-military spending per capita than any other state.

One clear example of federal dollars pouring into Maryland is through the Johns Hopkins University programs in medicine, science and engineering as well as its Applied Physics lab. Every year for the past 35 years, Hopkins has received more federal grants than any other university, last year totaling $2.1 billion. Another is the Chesapeake Bay clean-up program, which has received billions in federal funding to restore the main body of water as well as the many tributaries that feed into it.

Maryland is tucked away in the mid-Atlantic cluster of states, most of them blue though safely away from the arid steppes of middle America and the rust-belt states that border it to the north, west and parts of the south where most of the electoral volatility occurred. To be perfectly mercantile, there’s very little a president or an administration can do about what federal interests are already established. It would be impossible, for example, to fold up and cart away the massive Social Security complex at Woodlawn. Ditto the many other federal installations that are spread across Maryland, especially those for convenient access to the nation’s capital such as Andrew’s Joint Base, in Prince George’s County, home to Air Force One and landing strip for other VIP aircraft. By contrast, punishments usually come in the form of denial. If, by chance, Baltimore had another shot at the Red Line across the city, the proposal and the funds could easily be back-listed, even denied, by the administration.

But tampering with Social Security and Medicare, as some around Trump and other Republicans in Congress are eager to do, is another matter with serious personal and economic implications. There are 763,000 Marylanders receiving $12.8 billion annually in Social Security benefits and another 930,000 covered under Medicare in one category or another. Economic advisers around Trump want to join in the Congressional effort to privatize Social Security and turn the fund over to the whim of Wall Street, as President George W. Bush tried and failed. This would punish the very same newfound constituency of white working-class Democrats that elected Trump and is likely to meet with angry resistance, if not charges of betrayal.

Trump has promised to drain the swamp in Washington. It would be wise for him to remember the lesson of mythology that when Hercules was given the task of cleaning out the Augean stables: the assignment did not require refilling them.