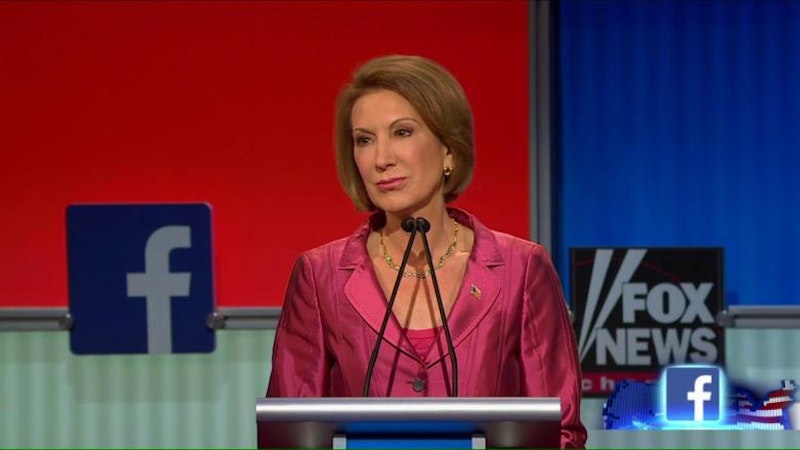 Politics is a lagging cultural indicator. It may take until, say, 2024 for Congress to decide it needs to formulate a national policy on the “sharing economy” or some other gratuitous piece of johnny-come-lately legislation. That’s good because by the time Congress rears its head, invariably to do harm, the culture may have moved on to something else.

But the culture may still seize upon whatever government’s up to today and read into it something of more timely cultural relevance. So, if (implausibly) we end up with a Trump/Fiorina Republican ticket (those two being perceived, by some measures, to have “won” their respective debates last Thursday), how might they be perceived through a 2016 culture lens?

It strikes me that among millennials, at least, they might well be perceived as a “troll” and a “woman in tech.” Long, long story short, a huge portion of nasty fighting online these days goes on between:

(a) people, often male, who (perhaps rightly) consider nothing sacred and like to subvert everything comedically, preferably while causing consternation and confusion, and

(b) social justice warriors who want to diminish the role of straight white males everywhere and in particular often find themselves defending women who have strayed into some sector of the Net or real-world tech-oriented businesses where the women either aren’t welcome or aren’t welcome if they’re going to be jerks who insist all the rules get rewritten for their benefit once they arrive (depending on whose perspective on such scuffles you prefer).

What more beautiful, peaceful dialectical synthesis of these two forces could we ask for than a partnership between Donald Trump, who plainly values comedic trolling more than decorum or conventional politics and is loved by many for it (I suggest the euphonious hashtag #Trollmp), and Carly Fiorina, who is plainly gutsy and smart but by most accounts gets more praise due to being a woman in business than for simply being a great business person.

As critics note, the value of Hewlett-Packard stock was cut in half while she was in charge. Yale business professor Jeffrey Sonnenfeld once said of her, “You couldn’t pick a worse non-imprisoned CEO to be your standard-bearer.” She also recently released a video mocking arrogant males in the boardroom and considers feminist Gloria Steinem a hero (though I’ll go out on a limb and guess Steinem’s voting for Hillary—and furthermore that Hillary will win).

Throwing a potential monkey wrench into my plan for a harmonious presidential ticket, Fiorina also tweeted at Trump, “I stand with @MegynKelly” and “Mr. Trump: There. Is. No. Excuse." Looks like Fiorina has a lot of periods, am I right?

But seriously, meanwhile, Trump’s busy trolling women such as Megyn Kelly, whom even mischievous Howard Stern hadn’t much fazed in an old interview in which he asked her questions about her breasts.

And Stern was a precursor to all this in more ways than one: I was there, gentle reader, when he and his army of fans took over the Libertarian Party of New York convention and transformed it into the launching pad for Stern’s short-lived 1994 gubernatorial campaign, a troll campaign if ever there was one. Indeed, watching a rich Trump waltz in and take over a weak Republican Party is a very New York experience: He has become a fusion of past political-interlopers Stern and Bloomberg.

In the unlikely event that America ends up run by an unserious, egomaniacal troll CEO after the next election, we’ll just have to hope he’s advised, if the nation is lucky, by a wise and pro-free-market trollboard.