Burning Down the House

What's next after the violence in Charlottesville? 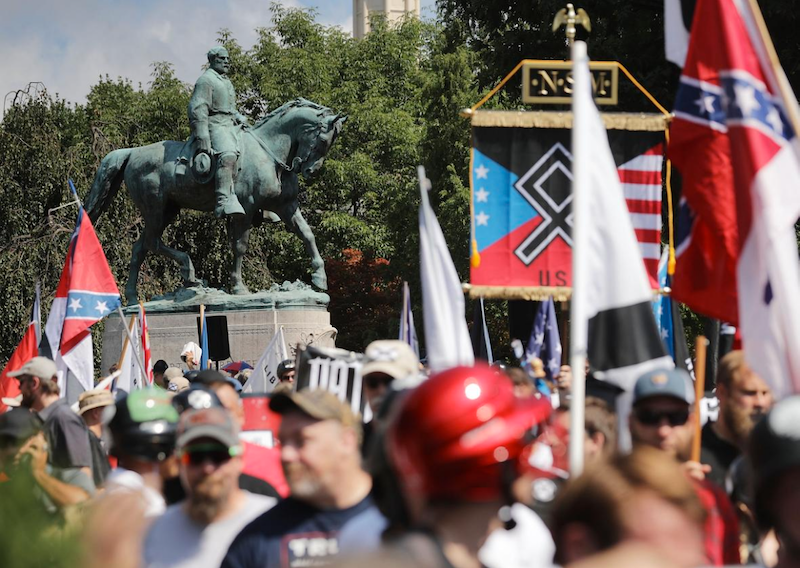 Sometime in October of 2013, I had a political discussion with a homeless man beneath an arch of an abandoned chapel in London's Abney Park Cemetery. The US federal government had recently shut down and my new friend wanted to know if America had at last descended into post-apocalyptic chaos. I’ll never forget how he phrased his question: “I realize this may be a delicate subject and I hesitate to ask, but is it simply pandemonium over there?”

173 years of teenage anxiety had resulted in glassless windows and eight feet of graffiti up the doors and walls, which added to the high weirdness of standing before a derelict chapel in the center of a London graveyard while arguing with a toothless dreadlocked gentleman in a trench coat. I'd gone out for a coffee and a bagel, made the mistake of taking a shortcut through Abney, and somehow found myself explaining how a funding gap gets created when Congress fails to pass an interim authorization for budget appropriations. The US was not imploding, I said. The government was just having a slight seizure.

My friend looked skeptical. In his view, American societal collapse was a foregone conclusion. Then the UK would have to step in and fix things as usual. He was adamant about that. Who else could do it? Who would even try? With all due respect to Mr. Obama, he said, the United States as we knew it was doomed.

I spent the rest of the day amused by the exchange. The poor man was obviously not right in the head, but he definitely had strong convictions and a mournful certainty that his perspective was correct. He wanted to be polite. But he felt it was important to let me know that I was lucky I landed in the UK before everything went to hell. Since I love England, I did feel lucky to be living in London. But I think if I'd met him under that chapel arch yesterday instead of four years ago, we might have had a very different conversation.

After the murder and mayhem that accompanied the Nazi rallies in Charlottesville, we cannot deny that the social-political structure fire in the United States is now raging out of control. The longer we allow it to burn, the more it’ll damage economic stability, psychological well-being, political agency, and personal freedom, and the fundamental day-to-day safety of Americans. Simply pandemonium? This is developing into pandemonium of the darkest, most pathological variety. And we're in it, all of us, right now.

If we don't do something about the destruction of our democracy (yes, that means all of us to the extent that we're able), we’ll be complicit in its fall and partly responsible for the results. That's not an easy thing to write; it certainly isn't easy to read; and it means our lives are probably going to get harder before long. But it is, insofar as I can comprehend what just happened in Virginia and how Trump responded to it, the unvarnished truth.

As Charles Pierce writes in his Esquire piece on the Charlottesville violence in general and the murder of Heather Heyer in particular: “Anyone who followed the presidential campaign saw this coming. Frankly, I'm surprised there wasn't more of it.” Toward the end of the article, he adds, “I can't remember a bleaker time in this country's history… Our sense of being a self-governing nation is being pulled apart. Our concept of a political commonwealth is unmoored and floating. Nothing is solid. Everything is fluid and everything ought not to be. Not like this. Not in the 21st century. We settled some things in the last century that should have been settled for good.”

Evidently things weren't settled. In fact, it may be fair to say things have become radically unsettled across the nation. A state of emergency was declared after the rally and the counter-protests started getting violent. But that didn't prevent James Fields from plowing into a group of counter-protesters with his Dodge Charger at high speed in order to—what? Strike a blow for fascism by killing some innocent people? Ruin our democracy that much more? Put Trump in yet another position where he must act presidential without knowing how? What happened in Charlottesville may be organic to the partisan hatred that carried Trump to the White House, but now Trump owns that hatred. And his bedfellows aren't so strange or difficult to recognize. They're Nazis. Our grandparents died fighting them in WWII.

Fields is said to be a US Army basic training washout given to explosive racist outbursts. He idolizes the SS and otherwise comes straight out of Klan central casting. We've seen pictures of him at the rally, dressed in the signature white polo shirt, holding a medieval-looking shield from Vanguard America, a white nationalist group founded on the idea that "a government based in the natural law must not cater to the false notion of equality." Fields, along with the other shouting, tiki-torch-wielding, stereotypes we saw swarming around the statue of General Lee, is another kind of tragedy, the sort that begets horror after horror in response to an inchoate tribal fear—what David Duke, former Grand Wizard of the KKK, has smugly termed, “the promises of Donald Trump.”

The emotional aftermath of a tragedy as it spreads through the media into the awareness of friends and family can be horrible. Sometimes, it can be just as bad, if not worse, than the event itself, especially when the event also augurs the possible collapse of the existing political order. When the President cannot bring himself to condemn the fact that an innocent woman died opposing Nazis on American soil; when a knucklehead like Andrew Anglin of The Daily Stormer feels empowered to follow the murder with, “Heather Heyer: Woman Killed in Road Rage Incident was a Fat, Childless 32-Year-Old Slut” and “Most people are glad she is dead,” we've gone beyond insults and trolling. Now we're witnessing a fascist confident enough to openly defend a hate crime and an act of domestic terrorism by giving an innocent victim the finger.

Since November, I've been writing about the Trump administration in order to ask how it possibly could have happened that we elected such a man. Now I'm asking a different question: how do we control the damage? Schopenhauer is famous for having said, among other things, that “hatred is an affair of the heart.” Or, as The Persuaders put it in 1971, “It's a thin line between love and hate.” Unfortunately, in the States, the line is getting thinner by the minute. Loving our friends, relatives, communities, family histories, even our government, has begun to seem as if it also means hating the opposition (or, at very least, hating some innocent party who we may arbitrarily decide to murder).

I'm reminded of a recent Politico interview with Hannah Dreier, who spent years documenting the implosion of Venezuela's democracy for the Associated Press. Dreier notes that “Things can always get worse and worse and worse, and there's no rule that says a miserable situation has to end, just because it's too miserable.” And I think of my friends who surprised me last year by chanting “Drain the swamp” and “Burn it down,” their Facebook timelines suddenly full of Pepe the Frog memes and Ayn Rand quotes. I wonder if they're pleased with themselves. The fall of America is now a very real possibility. But fine. Have it your way. It's burning.