The President Is Very Much Against Racial Hatred, Sort of

Being against Nazis ought to be easy. 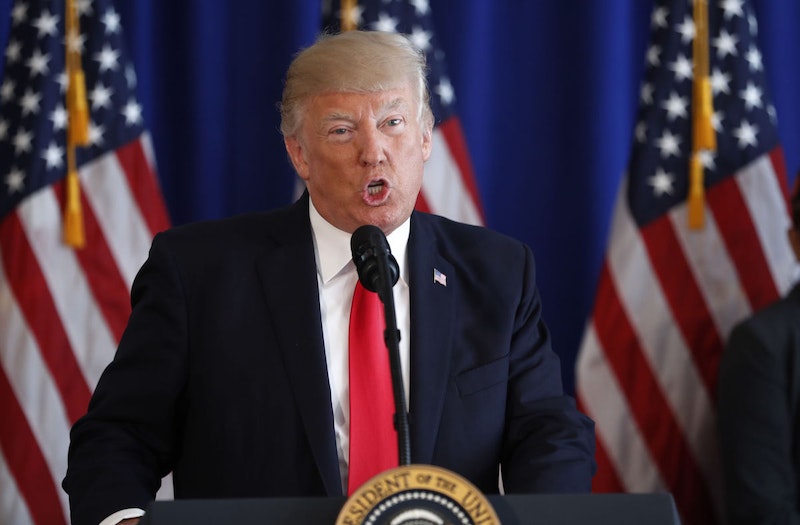 Love the ellipsis: “An unnamed White House official says Trump condemns all forms of hatred, ‘and of course that includes white supremacists, KKK, neo-Nazis...’” So tweets Kaitlan Collins of CNN, giving the gist of a White House email sent to the press. The email’s full version adds, “Yeah, you know, all that bad stuff.” No, it says, “and all extremist groups.”

The email’s premise is that an “i” is being dotted for sticklers. All right, the email says, let’s spell out the obvious. And yet the sender doesn’t have a name. Apparently the thought under discussion is so pedestrian that a shrug can get it across. Even so, better not have your name near it. Here we have the dilemma of the Trump White House. They know that most Americans hate bigotry, and that now and then we must be acknowledged. But the voters who like Trump the most, who really like him, have a certain attachment to the idea that white people ought to run everything. This idea is unpopular among people who hate Nazis and the Klan. Therefore, the Trump base has a very limited appetite for hearing criticism of the two groups. Well, no. It has an aversion to hearing such criticism.

The result is the mystery email and similar dodges. “I disavow, I disavow,” muttered candidate Trump when asked about the Klan. Now there’s a Trump administration, and it shrugs and looks away when a bigot kills an innocent American. That’s dicey ground for a politician. But we’re standing on some dicey ground too. Most of the country is convinced that we hate bigots. Even so, 46 percent of the electorate decided that Mr. Disavow ought to run the country. Now America’s led by a man who’s part of the internal Fifth Column for white supremacy. The country’s white majority has strayed into an odd in-between zone: against bigotry, governed by the bigots’ pal-in-chief.

Back in 2000, the Republicans made sure their convention stage had plenty of black speakers. Reason: swing voters wanted reassurance that the GOP was for blacks and not against them. In 2017, the leader of the party can’t even say he’s against the Klan. The country’s been through a lot in 17 years. The typical white American, once used to the idea that our kind was the earth’s master, has seen American safety, military might, foreign standing, and economic prospects undergo the vicious knocks known as 9/11, the Iraq and Afghan Wars, and the ’08 crash. We’re also facing up to this new idea: that the country itself isn’t automatically ours to run. A black can be president. A lot, not just some, of the people on our TVs don’t look the way we do.

Those swing voters of 2000 were held to be white people in the suburbs, the same sort of people that wear polo shirts and Dockers. In 2017, wearers of polo shirts and Dockers buy some torches at Pier 1 and go marching for the white race. I said that American whites have wandered into an in-between zone. If we wander out again, I wonder which side we’ll find ourselves on.