The Upside of Rand Paul’s Withdrawal

He’ll remain in the Senate. 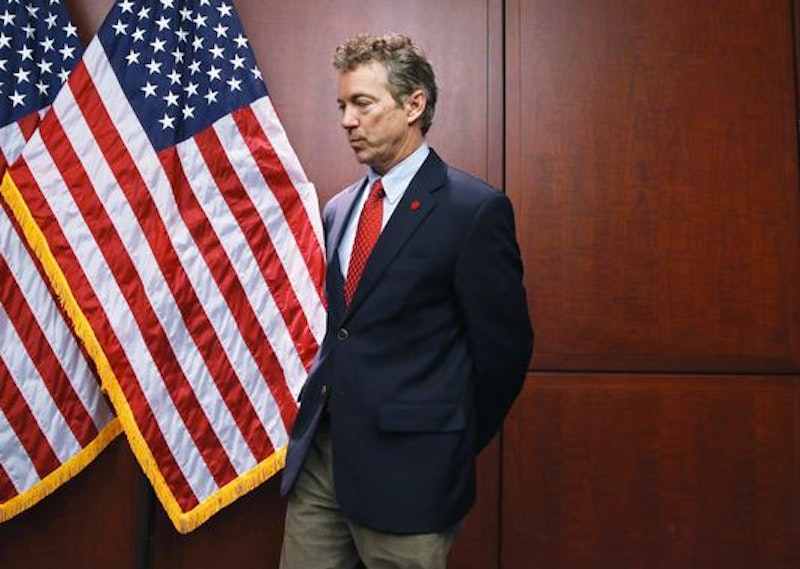 Rand Paul resisted pressure to drop out of the race following his fifth place finish in the Iowa presidential caucuses Monday, pointing out that he’d topped Jeb Bush, John Kasich, Chris Christie and two past winners of the Iowa contest. But by Wednesday, he’d had enough. With the New Hampshire primary looming, he decided to suspend his campaign for the Republican nomination. “Today, I will end where I began, ready and willing to fight for the cause of liberty,” he said in a statement.

I’m not a silver lining guy and Paul’s presence in the debates will be sorely missed. Yet there’s one upside to Paul exiting the presidential race this early. Now he may manage to hold onto his Kentucky Senate seat, and he’s been an extraordinarily productive senator.

Google Dictionary defines a filibuster as “an action such as a prolonged speech that obstructs progress in a legislative assembly while not technically contravening the required procedures.” Time was, if senators wanted to stall the progress of a nomination or legislation, they had to stand up and speak for hours on end—often keeping just one foot in the chamber to hold the floor while they peed in a bucket in the cloak room. The U.S. Senate had substituted a phony, antiseptic “quiet filibuster” for the real thing. Paul brought the filibuster back.

On March 6, 2013, he used the occasion of John Brennan’s CIA nomination to force the issue of drone assassinations on American soil, saying, “I will speak as long as it takes, until the alarm is sounded from coast to coast that our Constitution is important, that your rights to trial by jury are precious, that no American should be killed by a drone on American soil without first being charged with a crime, without first being found guilty by a court. That Americans could be killed in a café in San Francisco or in a restaurant in Houston or at their home in [his hometown of] Bowling Green, Kentucky, is an abomination.”

Paul won that fight, incidentally. The Justice Department quietly issued a ruling after his filibuster that forbade the use of America’s troublesome assassin drone program on U.S. soil.

From the Senate, he may win other fights as well. Paul is at loggerheads with Ted Cruz on the important issue of criminal justice reform. Cruz recently abandoned his support for sentencing reform, but Paul’s done no such thing and he’ll be returning to the Senate ready to fight about it and a host of other issues—especially civil liberties, a busted budget, and America’s role in the world.

Paul believes, and many agree, that America’s become unmoored from its constitutional anchor and set sail looking for dragons to slay. He thinks the country’s outsized role in the world will come at a steep cost for Americans, in terms of both debt and casualties, and quite possibly help wreck the peace of nations. It would’ve been thrilling to have a man with such views in the White House, but the Senate can use Paul’s steady hands, strong voice, and clear eyes.