It’s historically odd, but a primary challenger helps the incumbent. 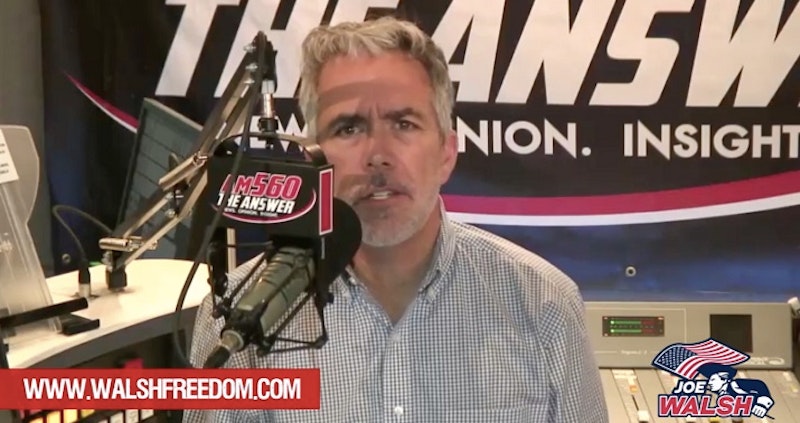 If Donald Trump knew anything about pop culture, he would’ve hummed “Life’s been good to me so far,” as he tapped out another tweet about China, Andrew Luck, Boris Johnson, tax cuts and Emmanuel Macron, among other topics or peeves, last weekend. I’d guess that the #NeverTrumpers, if they’d heard of ex-Eagle Joe Walsh would prefer him to the batshit crazy syndicated radio host (and one-term Illinois Congressman) Joe Walsh, who announced he’d challenge Trump in next year’s primaries. The prolific tweeter, who says he’s to the right of Trump, and has had to apologize for various racist comments made over the course of years, is yet another gift to the President, who can’t help it if he’s lucky. In 2016, for example, Walsh tweeted: “Watch out Black Lives Matter punks.”

Walsh appeared on ABC’s This Week last Sunday, telling George Stephanopoulos—one of the first government officials to trade hats and accept a rich TV contract—“We’ve got a guy in the White House who is unfit, completely unfit, to be president,” apparently forgetting his 2016 pro-Trump tweet, “On November 9th, if Trump loses, I’m grabbing my musket. You in?”

I’ve no idea if the likes of Bill Kristol, Jennifer Rubin, George Will, Bret Stephens (assuming he’s still at the Times after bedbug bedlam; as noted before, I like a lot Stephens’ columns, but he’ll wear the hashtag #IAmAnAsshole on his forehead for the foreseeable future) and born-again liberal Max Boot (trying to sell books) have hooted from the GOP bleachers their support of Walsh, but they’re so desperate for attention—just like nemesis Trump—that it’s not that big a leap, even if they prefer a gentleman neocon like Mitt Romney. (Romney would be the logical opponent to Trump, except the Utah Senator doesn’t have the guts to back up his criticism of the President.)

Normally, a primary challenger to an incumbent is a pain in the ass—as George H.W. Bush found out with Pat Buchanan in ’92, and Gerry Ford, stalked by Ronald Reagan in ‘76—but Walsh isn’t even an irritant (and is likely in the mix to promote his talk show, which will be suspended for however long he stays in the race). Here’s where the luck comes in: the media, temporarily bored with the non-stop bleats from the Democratic candidates, are sure to give Walsh more credibility than he deserves. I briefly wondered whether Trump would consent to debate Walsh (and Bill Weld), and then scolded myself: of course he will, too hard to resist.

Trump/Walsh is a more tempting story: which simply reinforces my opinion that fully 80 percent of political reporters and op-ed columnists are privately rooting for a second Trump term. How can you top the regular indignation, calls for impeachment or the 25th Amendment, and for a select few, a book deal down the road? Story of a lifetime. Democrats rarely provide juicy copy: it’s satisfying to mock Elizabeth Warren for her ham-handed efforts to appear like “ordinary folks,” with her “I’m gonna get me a beer,” strawberry shortcake recipes and anticipation of a new episode of Ballers but that can’t compete with Trump floating the idea of buying Greenland. No vision, Liz!

Bill Scher, who contributes to Politico and Real Clear Politics, wrote a long and even-handed, story about Warren on Tuesday, in which he spoke to “unaffiliated” Democratic and Republican consultants/strategists—who had different points of view, of course—about the problems Warren might face on the “honesty” issue in a match-up with Trump (who’s so dishonest, it doesn’t hurt him). Scher concluded: “It’s a simple fact [Warren’s] Native American controversy did once damage Warren’s presidential aspirations and that her recovery [among progressives] has yet to reach most moderate voters. If she has a plan for reaching them before Trump does, we haven’t seen it yet.”

I think the media’s had its fill of Bernie Sanders’ earnestness, and humor, because he’s so 2016. Biden’s daily senility exercises can only go so far before readers tune out—the soul brother, metaphorically, of Neil Kinnock, is only allowed to stay in the race because Trump changed the rules—and Beto… well, isn’t it “conventional wisdom” that he’s just a dick? I’m not sure why, but Mayor Pete has attracted the image of the “wrong kind of gay,” so he might up the ante and move his campaign headquarters to Folsom Street. No one likes Kamala Harris, Marianne Williamson had her moment, and the very interesting Andrew Yang is treated like a scrawny nose-picking fifth-grader whose lunchbox is filled with carrots and grapes.

The “progressive” voters who caucus with the Democrats—at least in a "let’s pretend" way—are either in the midst of a sugar rush or coming down from a bad crystal meth jag. When the whipsaw market took a nosedive last Friday (as it will again) some morons, who apparently have no comprehension of economics, tweeted, “Thanks, Dotard, you destroyed my 401(k) today.” Manners escaped many of them last week when David Koch, a complex and brilliant man, died. “Not a moment too soon! was a common dance-on-the-grave taunt, as well as hopes that he’ll “rot in hell,” even from atheists! Imagine the reaction when Rupert Murdoch or Clarence Thomas croaks.

Perhaps it’s generational, but I found the lack of grace in very bad taste. I don’t care at all for Jimmy Carter or Ruth Bader Ginsburg, to pick a couple of likely last-train victims, but jeez, when a famous person dies put the insults on hold! That’s not a self-toast, by the way, just what was once considered proper etiquette. Which doesn’t exist anymore, and Trump is partially to blame. By the way, there’s a video clip making the rounds of Trump in the 1970s at Studio 54, in a suit with really weird eyebrows, dancing very badly, which makes sense since he's always been a teetotaler. He’s a sight today, with that gut, ass the size of Oklahoma, and whatever the fuck he does with his fake hair, but the 70s Trump has a far more repulsive look.

Purposely repetitious, if the media (fat chance) and Democrats just ignored Trump—boycotted his tweets, skip the daily insults—the man known as “45” by the unimaginative, would leave D.C. for good in January, 2021.