The U.S. versus China—The Next Cold War?

China would be a tougher foe than the USSR was. 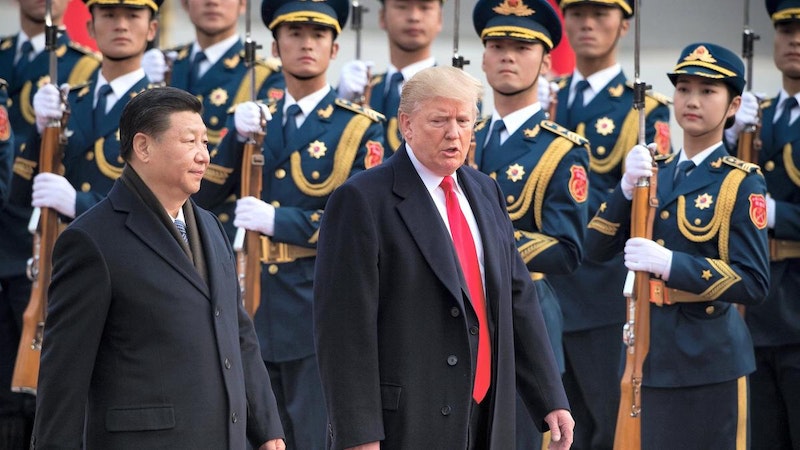 President Donald Trump called his Chinese counterpart, Xi Jinping, an "enemy" last week, a radical departure from his recent habit of calling the dictator his friend. Whether the sudden shift was an impulsive reaction to an incendiary Fox News segment the President was watching during “executive time,” or a calculated ploy, one cannot say for certain. But it does provide an opportunity to discuss the murky matter of whether or not China's a friend of this nation, an enemy, or a just a rival.

Bill Gertz, former Media Fellow at Stanford University and an expert on national security matters, has asserted that China’s getting the upper hand over the U.S. in the race to fully utilize Artificial Intelligence in the interest of national security. China has a massive military, is intent on securing shipping lanes in the South China Sea, and is spending $150 billion annually on its "Belt and Road" project, which involves China underwriting billions of dollars of infrastructure investment throughout South and Central Asia. By offering sweetheart deals, China’s looking to purchase influence in those nations. At the same time, it's cultivating relationships with nations hostile to the U.S., such as Russia and Iran.

The unfortunately named BARF initiative's the first major indicator that Xi's ditching Deng Xioaping's philosophy: "Hide our capabilities and bide our time; never try to take the lead." The new, assertive China's embarked on a mission to take the lead over the U.S. in geopolitical leadership and technological and military dominance, and it's willing to play rough.

In 1972, Richard Nixon, angling to gain leverage over the Soviet Union during the Vietnam War, stunned much of the world by traveling to China for a week of meetings that would culminate in the U.S. formally recognizing that nation for the first time since the Communist Party revolution in 1949. National security experts knew that, once Soviet power waned, China would move into a more adversarial relationship with the U.S., but few could have foreseen the present situation, in which an unintended event could trigger a major military conflict.

Nixon's diplomatic coup would eventually lead to his nation's economy becoming intertwined with that of its greatest geopolitical rival, a process that was sealed by the decision to allow China into the World Trade Organization in 2001. The result is that the United States is now dependent on a communist dictatorship with no regard for the human rights of its citizens, including the estimated one million Uighur Muslims it holds in detention camps.

The proponents of admitting China into the World Trade Organization operated under the naive assumption that bringing the PRC into the community of nations and showing them a path to prosperity would moderate their geopolitical ambitions. This turned out to be magical thinking along the lines of Obama and the West believing that moderates in Iran would eventually prevail if a nuclear deal was established. Xi has since made himself the Chinese ruler for life, and he's showing few signs of moderation. Any political opponent looking to moderate him is likely to end up in a prison cell.

Obama was on the right track by trying to rein in China with his Trans-Pacific Partnership (TPP), which he said was a means to ensure that “the United States—and not countries like China—is the one writing this century’s rules for the world’s economy.” Trump withdrew the U.S. from the TPP as soon as he got into office, but his recent remarks about Xi indicate that he's realizing the truth in what some experts said at the time—that withdrawing would reduce American leverage over dealing with China's abuses.

Abuses such as China's theft of intellectual property—use of patents, trade secrets, trademarks, and copyrights without permission—the U.S. Trade Representative has estimated at between $225 billion and $600 billion annually. This is done via corporate espionage, cyberattacks, and forced technology transfers from American companies investing in China. When I visited a Chinese university near the southern city of Guangzhou for a few days a number of years ago, I heard people openly talking about pirating American software. That's far from an isolated example.

Some wishful thinkers insist that China's America's friend, not its enemy, but does a friend steal at that level, compete against the U.S. with stolen technology, or hack into major American companies, universities, and research institutes? China's a communist nation of 1.5 billion people—an Orwellian state that gathers a stunning amount of information on its citizens as part of its "social credit" system that, among other things, determines what jobs people may be ineligible for. It's a natural enemy of a capitalistic superpower with a Bill of Rights.

The Chinese Communist Party's the number one threat to the United States, but the threat level's gone undetected due to distracting global events such as 9/11 and the War On Terror. While the U.S. and its Western allies were preoccupied with Afghanistan, Iraq, ISIS, and Al-Qaeda, China beefed up its military. The Soviet Union was once a threat to America, but its economy was a mess, which kept it in check. China has a flourishing economy in which entrepreneurs can thrive, and it's playing the long game.

You don't hear much about Chinese nationalism in the media, but it's there in the "Middle Kingdom." There's a narrative that the rise of the West in recent centuries is an historical anomaly brought on by China's previously weak military unable to stand up to imperialism. But that problem's fixed now, so China can reassume its place at the center of the world.

The United States may now be heading towards a cold war with China, a nation that, with its unleashed private sector, is much stronger than the former USSR was. The crackdown on the protesters in Hong Kong, who the Chinese government has called "terrorists," may be the first major event of that war.