The Political Compass Test is Garbage

In theory it's a decent but flawed idea. 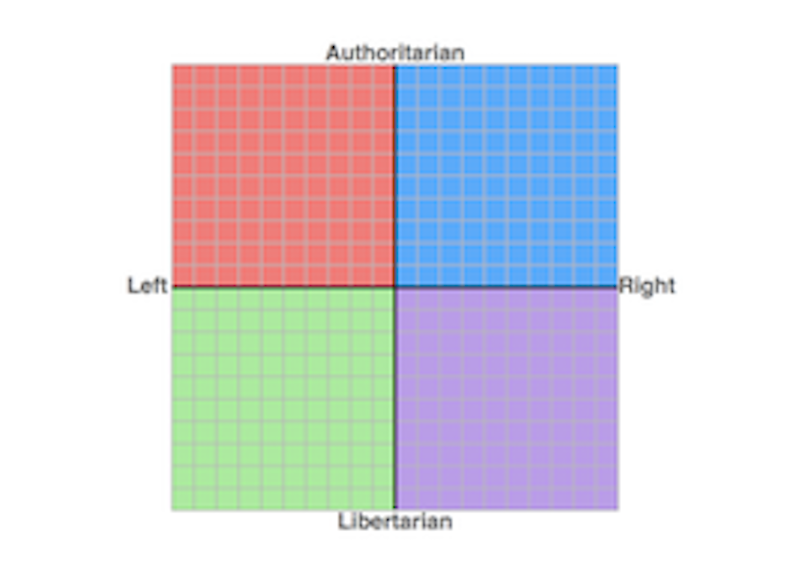 With Democrats determined to oust President Donald Trump, the American public has been subjected to an unfortunate reality: an early primary season.

The first debates were held in June, more came in July and come September, there will be even more. Few can identify every Democrat who announced a run, nor will most of their names be relevant in six months. However, when elections come around, regardless of who’s running, there’s one awful constant: online political quizzes. The Political Compass test is the worst quiz.

The popular and often mocked test asks users a handful of questions and then pins their views to a two-dimensional political compass with four quadrants: authoritarian left, authoritarian right, libertarian left or libertarian right. In theory, it's a decent, but flawed idea. The execution, however, is downright atrocious.

The quiz doesn’t allow neutrality on a topic or no opinion; this is a problem because not everyone knows enough on a topic to have a hard stance or they simply just don't care one way or another on an issue. Even former Republican presidential candidate and paleoconservative Pat Buchanan doesn’t have a stance on single-payer health care.

Many of the questions are either loaded or completely irrelevant while huge political topics are completely ignored. The quiz starts off with the following proposition: "If economic globalisation is inevitable, it should primarily serve humanity rather than the interests of trans-national corporations."

If one believes globalization makes life better for both sides, they see no conflict and can’t answer it. Then, abortion. It reads, "Abortion, when the woman's life is not threatened, should always be illegal." I don't know many people, even on the pro-life side who would agree. A majority of Americans support first trimester abortions, but a ban after three months, according to Gallup. In other words, there's a difference between someone supporting a rape exception performed at eight weeks and an elective abortion after 20 weeks.

The test also avoids some of the biggest political issues of the day: immigration, health care systems, endless wars, federal government spending/deficits, the Second Amendment, labor unions, states' rights, higher education, etc. Instead, it asks if astrology accurately explains things (no), if society is too open about sex (yes), if abstract art should be considered art (not my thing, personally), if the "businessperson and the manufacturer are more important than the writer and the artist", and so on.

And then the ridiculous results. Without any of them actually taking the test, the political compass creators decided that virtually everyone running for president in 2020 is on the hard right (in comparison to all western democracies, they argue). They put the Republicans as far right as possible and on the extreme authoritarian side. They put them, including Maryland’s moderate governor Larry Hogan, who is popular in a liberal state (and not even running for president), where someone would put former Chilean dictator Augusto Pinochet if they were making a meme. All of the Democrats are hard-right authoritarians except the center-right Elizabeth Warren and Bill de Blasio as well as libertarian right-winger Marianne Williamson and libertarian left-wingers Mike Gravel, Bernie Sanders and Tulsi Gabbard—who are basically centrists in their eyes. Wild.

Meanwhile, when I took the test, I got -1.38 on the left-right scale and -1.03 on the libertarian/authoritarian scale, putting me on the libertarian left. That’s inaccurate and that I’m not a secret Bernie Bro. The kid who occasionally writes opinion pieces for The Washington Examiner and used to write for a website cofounded by a Fox News host is probably to the right of Warren.

On the Compass’ FAQs, they argue that politicians speak in codes and trick people and that deep down, people don’t believe what they say. An example reads, “A conservative person may be straightforwardly opposed to universal health care, but disagree with a proposition suggesting that the quality of a child’s health care should be governed by the health of the parents’ finances.”

There are conservatives who’d support universal catastrophic coverage as a cheaper alternative to Obamacare and Medicare for all; it’s an idea Breitbart suggested when Trump first took office and one that both Ronald Reagan and Richard Nixon supported during their presidencies.

Other tests are no better. On The Issues, which has existed since the 2000 presidential election, has a similar system where they try to label people moderate, libertarian, conservative, liberal or populist. Never mind that they misconstrue populism and authoritarianism, and instead focus on the incompetence of their system.

They label former New York City Mayor Michael Bloomberg a libertarian-leaning progressive and former Massachusetts Gov. Bill Weld as a progressive libertarian. In reality, however, Bloomberg is quite authoritarian, as Reason magazine has pointed out. The latter was Gary Johnson’s running mate in 2016 and is challenging Trump for the Republican nomination, in part because of the deficit.

Meanwhile, its system makes little distinction between how extreme someone is on a certain issue. They rate presidential candidate Andrew Yang’s universal basic income policy under social security, a category in which he gets negative three economic points. In contrast, former President Barack Obama received minus five economic points on Social Security even though he proposed making cuts to it before. Proposing the largest entitlement program in US history should put Yang well to the left of Obama, who wanted to cut something people paid into.

In 2016, Gary Johnson used this broken system to pander to disgruntled Bernie Sanders supporters. Using his results from the ISideWith test, Johnson touted himself as agreeing with Sanders 73 percent of the time. One is a libertarian. The other is a self-described “Democratic Socialist.” Granted, the ISideWith test is better than the Political Compass: it offers an “add your own stance” button if you don’t agree with the given answers, so it’s unclear how those are calculated. It lacks a “no opinion” button like there is on On The Issues (although the vote match quiz for On The Issues is disabled for now until closer to the 2020 election).

And 8Values offers many of the same loaded questions as the Political Compass, but with the stupid astrology and art questions removed in favor of some more substantive ones—like healthcare, drug legalization and gun ownership. However, they asked people to prioritize between a balanced budget and the general welfare of the population while their gun question reads, “Gun ownership should be prohibited for those without a valid reason.” Their test called me centrist, which is more accurate than the Political Compass test.

People shouldn’t rely on these tests to see where they align politically or determine a vote. For most, there’s not much to gain from treating politics as a sporting contest, where they pin themselves down into some label with a rigid set of ideologies and change their views based on what their team’s politicians say.