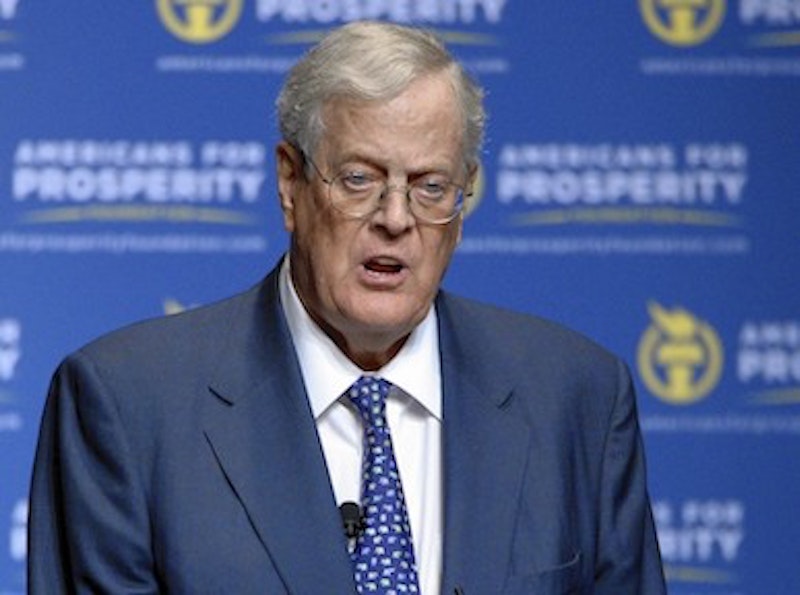 A lot of surprisingly respectable journalists, with blue checkmarks on Twitter and articles on sites from Slate and Gawker Media to GQ, were gleefully celebrating the death of libertarian businessman and philanthropist David Koch over the weekend, which makes it a safe bet they’d celebrate the mass death of libertarians like me as well if they got the chance. Yet our goal in life is precisely to do them no harm, letting them do as they please with their bodies and property.

Their insane, grotesque rage is what modern liberalism has wrought, and still there are ghouls, from the autistic professors to the stone-cold-sociopath political activists, who defend liberalism, assuring us liberals mean to say nice things and just get carried away sometimes, or perhaps misread a few graphs and footnotes while striving to be objective about politics and economics.

The left—and modern liberalism, to the extent it functions as a defender of or gateway to the left rather than as a distinct political force for maintaining property rights and markets—is so far gone now that poor Alyssa Milano ended up having to fend off angry Twitter hordes merely because she dared point out to fellow leftists that reveling in someone’s death looks bad. The left doesn’t care anymore. Their hate has become a self-justifying state of ecstasy at this point. And they want more power.

In their rage, they tend to conflate all non-left political phenomena, so Koch is repeatedly described as a “right-wing” or “far-right” figure instead of a libertarian one, not just in the activist left’s rhetoric but almost invariably in the headlines of venues such as The New York Times, which surely knows better but sees another chance to exploit the right-left divide to goose reader interest. In a leaked transcript of an editorial meeting there, Times editors basically admit that they need to stoke or at least appease the leftism of their readers and admit that with the whole Russia investigation leading nowhere, they may need to pivot to combating racism full-time. The readers love that.

And so now we get the Times’ big “1619 Project” reminding us that there was a slave in the English-settled part of the New World even before the Pilgrims arrived, though what an amnesiac world may need more these days is a “1989 Project.” I don’t mean another Taylor Swift album but rather a reminder that European Communism collapsed in 1989 and the whole world took a huge step closer to freedom and prosperity as a result, which should call into question the wisdom of socialism and central economic planning in general. Decentralize right down to the level of the individual and let us make our own decisions, say libertarians such as the late David Koch.

At least Hong Kong appears to remember Beijing’s Tiananmen Square crackdown from 1989. They understand the basics of history and politics better than the current crop of U.S. college students likely do.

But instead of trying to expand upon the rebellious anti-socialist wave of 1989, about six years ago, when the left probably should’ve kept its wary eye on populism and Trump if they wanted to avoid their current anguish, outfits such as Slate and Salon instead cranked out about an article per day (routinely full of inaccuracies about even the most basic philosophical premises) condemning, yes, libertarianism. And soon they had a whole, explicitly anti-libertarian department of the think tank Demos and the wildly misleading work of “historian” Nancy MacLean adding a couple extra kicks to capitalist ribs.

The left at that time thought libertarianism was the big rising threat, and oh how I wish they’d been correct. It’s flattering, really, that in a world with so few libertarians, we seemed worth all the harsh condemnations and bogus revisionist history arguments (decrying everyone from economist James Buchanan to economist Ludwig von Mises as closet Klansmen just for daring to point out government is inefficient, which it is).

Now, by frightening people away from both the left (through its own shrillness) and libertarianism (through the leftist misinformation campaign), the lefties have helped put in the White House an administration so populist that its restraints on free trade may yet win it plaudits from actual communists. It’s ironic that an administration seen as hyper-capitalist is becoming about as big an impediment to free trade in China as Maoism is these days.

If that were the left’s roundabout plan for victory all along, I’d hail them as strategic geniuses. But that wasn’t the plan. For now they’ll hypocritically shriek that trade barriers in the name of populist nationalism are barbaric and wrong, and if two years hence Biden is in the White House and recommends tariffs in the name of labor unionism or environmental sanctions, they’ll go right back to cheering for tariffs. Consistent, radical free trade—no barriers, no government violations of property rights, would be nice.

It would render the right-left divide irrelevant and prove the world learned something from 1989 after all. Then all the sacrifices made over the years by heroes such as David Koch for a thankless, stupid world will not have been in vain.