Are they being rigorous and fair? Or are they trying to select an acceptable candidate for the nomination? The two aren't necessarily the same. 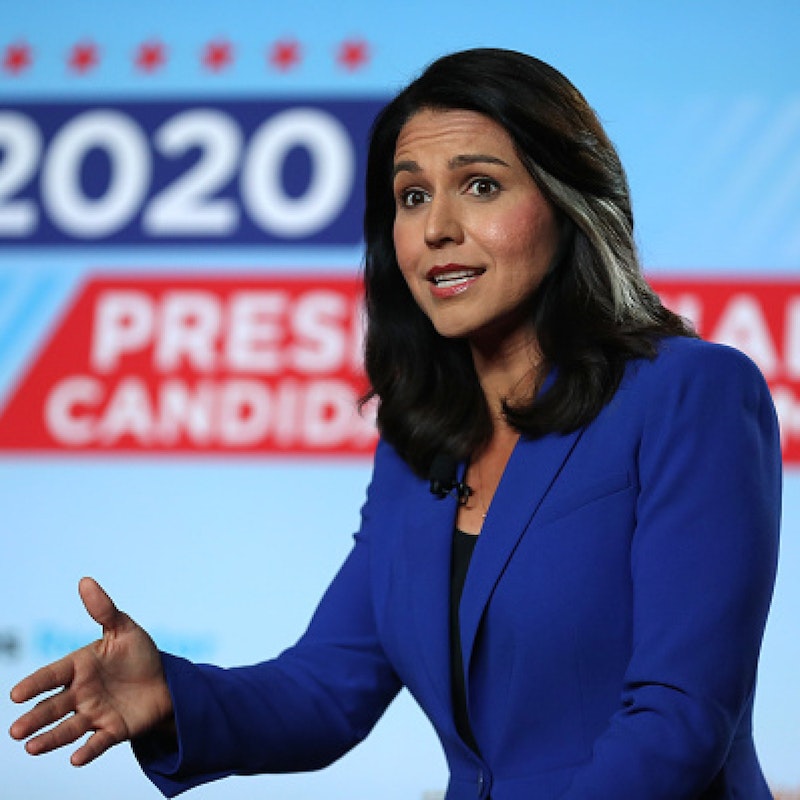 The Democratic National Committee is "stifling debate at a time when we need it most" whined Colorado Sen. Michael Bennet. Bennet was upset because he didn't make the September Democratic debates, which means that his no-hope candidacy has even less hope. Many other candidates are in the same situation. Of the more than 20 people running for the Democratic presidential nomination, only 10 made the donor and polling cut-offs to debate in December. (The people on the debate stage will be Joe Biden, Elizabeth Warren, Bernie Sanders, Kamala Harris, Pete Buttigieg, Beto O'Rourke, Cory Booker, Amy Klobuchar, Julian Castro, and Andrew Yang.)

The DNC has faced criticism from fans of those who won't be on the stage. Hawaiian Rep. Tulsi Gabbard's weirdly cultish following of rabid right-wingers and confused "leftists" who think support for brutal dictators like Assad is an anti-war platform insist the DNC has treated her poorly. Massachusetts Rep. Seth Moulton griped that high donor requirements favored more progressive candidates who actually excited voters, which hurt boring waffling centrist nonentities like himself.

Other, more objective observers have also questioned the DNC's criteria. Natalie Jackson, director of research at PRRI Polling pointed out on Twitter that polls are prone to a certain amount of error, so letting in debate contestants who get two percent and dropping those who only get one percent is arbitrary and ridiculous. "Strict polling cut off probably shouldn't be used for debate qualifications," she concluded. The debate qualification criteria aren't rigorous. They're unfair.

But is the DNC really trying to be rigorous and fair? Or are they trying to select an acceptable candidate for the nomination? The two aren't necessarily the same, and in fact focusing too much on the first may make the second unnecessarily harder.

The DNC isn't trying to give every candidate a cookie. They're trying to solve a collective action problem. Trump's weakness has led basically every politician in the Democratic Party, and many would-be politicians, to say, "Anybody can beat that doofus; why not me?" Bill de Blasio, Steve Bullock, Joe Sestak, Wayne Messam, John Delaney—they all figure that if they can stay in the race long enough, others will drop out, and they'll have a chance to break through and get that brief burst of media attention.

Candidates all want to stay in as long as possible. But if they all stay in too long, the Party ends up divided and unable to choose a good nominee—which is when you get unqualified grifters like Trump slipping through. The DNC doesn't want that. So how do they narrow the field?

They've decided to narrow the field by putting somewhat arbitrary restrictions on debate entrance over time. The first round of debates had lenient donor and polling levels, and virtually everyone got in. With 20 candidates on stage, self-help guru and anti-vaxxer Marianne Williamson got her chance to babble about love and make an admirable case for reparations. Rep. Eric Swalwell told Joe Biden he was too old. Gabbard got to cosplay as an anti-war candidate.

But now the debate criteria have toughened. Hopeless candidates suddenly have to admit to themselves, and their donors, that they’re hopeless.

As it became clear that they wouldn't be on the debate stage, some candidates started dropping out. Washington Sen. Jay Inslee acknowledged that his climate change campaign was going nowhere. Seth Moulton admitted that no one wanted him. Kirstin Gillibrand (an early favorite of mine), who’d emphasized reproductive health issues, dropped out as well

I’m sorry to see Inslee and Gillibrand go; they're both qualified candidates with valuable ideas and messages. On the other hand, it's satisfying that Gabbard and Marianne Williamson are excluded from the debates, since both are unqualified and are running on deceptive and dangerous platforms. Even better, billionaire egomaniac Democratic donor Tom Steyer, who dumped millions in early states trying to buy his way onto the debate stage, failed to qualify. I hope he cried.

But the point is that the DNC successfully winnowed the debate participants down by more than half. Some of the candidates onstage clearly belong there—whatever you think of Biden, Warren, Sanders, and Harris, they're all qualified candidates with broad support among voters. Other candidates have less of a rationale—tech industry guy Andrew Yang hasn't held political office, and the appeal of Indiana mayor Pete Buttigieg continues to elude me.

Some candidates like Buttigieg catch press and public interest, for whatever reason. Some, like former HUD secretary Julian Castro or New Jersey Sen. Cory Booker, don't quite, but managed to make it into the debate anyway.  The exact bodies on stage matter less than the fact that there are less of them.

I think the DNC would be smart to think about using some different criteria. In particular, they should require candidates to release their tax returns, a move that might discourage wealthy jerks like Steyer.

But overall, the strategy has worked well. They excluded unqualified and unacceptable candidates like Steyer, Williamson and Gabbard, at least this round. They created incentives for candidates to exit the contest. They've identified the likely frontrunners and some reasonable alternatives. There are still way too many politicians wandering around Iowa at this point. But it's not hard to see how, this time next year, the Democrats might have a nominee.