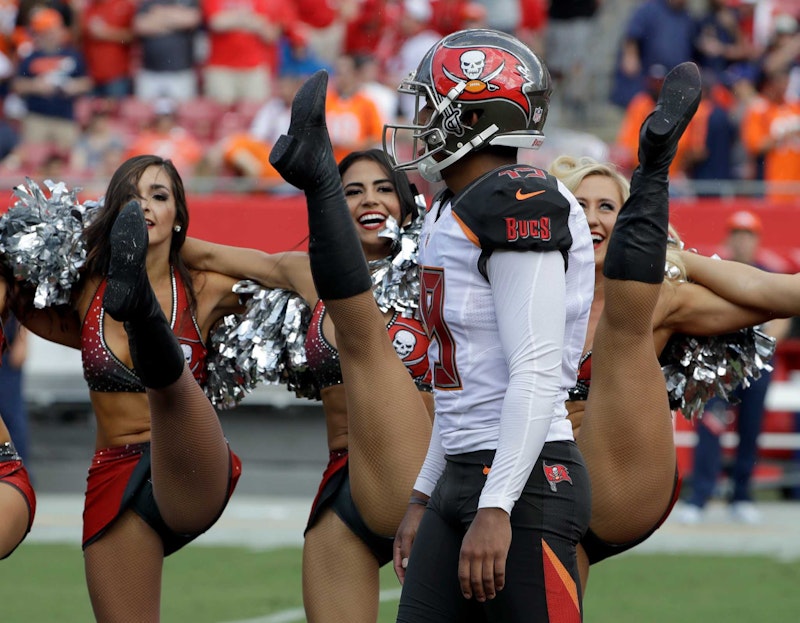 What does a liberal journalist do when pushing an agenda, but the people covered want no part of it? Easy. Push it anyway.

That’s why Elle is encouraging NFL cheerleaders to start taking a knee during the national anthem in solidarity with players who are protesting perceived racism and police brutality. It’s part of our current cultural life, where everything, from jokes to books to songs to the national anthem, must be politicized. People virtue signal even if the politics of the NFL protests have become unclear. The kneeling started as a response to police brutality, but lately players have claimed that they are protesting unequal pay.

The problem with Elle’s piece is that the cheerleaders don’t want any part of it. In “This Is Why NFL Cheerleaders Haven't Taken a Knee,” by Elissa Strauss, the Elle author comes up against some cheerleaders who are un-woke. “Bottom line, cheerleaders are a little fish in a big pond,” Michele Wright, a broadcast journalist and former cheerleader for the Jacksonville Jaguars, told ELLE.com. “Although they are of great worth and value to the football experience and their respective communities, many are undervalued. So to remain neutral, they wouldn’t take a knee.”

Strauss then admits that the NFL isn’t Berkeley:

Wright’s feelings echo those expressed by a number of former cheerleaders who spoke to ELLE.com about the protests, on- and off-the-record. (All of the over 50 current cheerleaders, cheerleader coordinators, and team captains contacted for this story didn’t respond or explicitly declined to comment.) Cheerleaders, they explained, are expected to be founts of positive energy, impeccable rhythm paired with toothy smiles and toned legs. They are supposed to be fun and have fun on the field; such a good time that it compensates for the fact that they are, in the best of circumstances, being paid minimum wage with no health benefits by an industry that rakes in $14 billion dollars a year in revenue. Voicing their opinions in public is, in most squads, considered squarely unfun, and so cheerleaders are discouraged from doing it.

In conclusion: “Not one woman ELLE.com spoke to for this story said she would have participated in the protests. It’s simply not the culture of cheering, they explained, and their captains wouldn’t have supported them.”

Thank God. In a world of college students who don’t believe in the First Amendment, the continued existence of the American Communist Party, and Playboy using transsexuals for centerfolds, NFL cheerleaders are the real resistance. With their patriotism, humility, bright smiles, and unabashedly feminine legs, boobs, and backsides—they are What Makes America Great.

In a perfect world, the cheerleaders telling Elle to pound sand would settle the issue. But the media has a social justice warrior agenda to push, so there has to be someone who’s willing to tilt a lance at the gridiron patriarchy. With not a single active cheerleader supporting her, Strauss tracks down former Colts cheerleader Dorothy Doe. Doe “said that as a black woman she probably wouldn’t have felt comfortable taking a knee alongside her mostly white squad in front of mostly white fans. ‘It would be hard to be the only one,’ Doe, now a financial coach for women, told ELLE.com. ‘Plus the skirts are so short.’”

Come on girl! Snug shorts are a small price to pay for the Revolution.