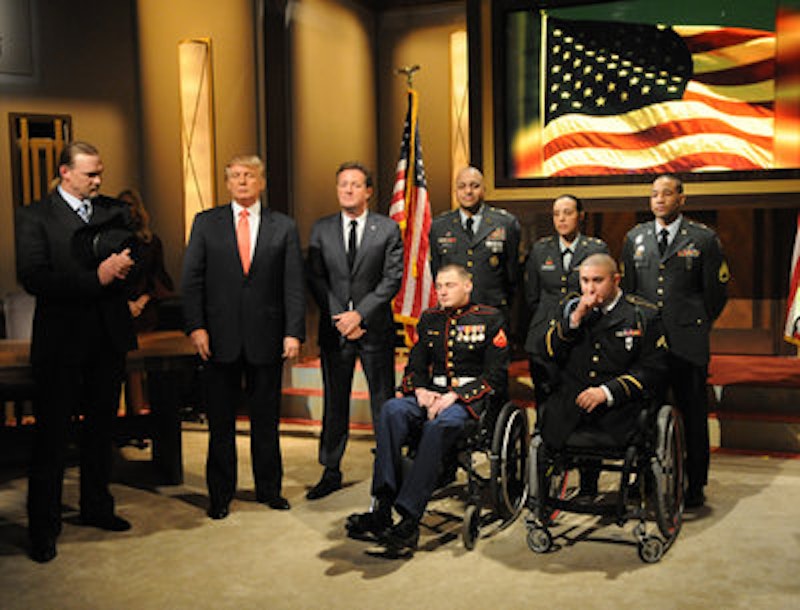 Who would you rather have figuring your taxes, a president who’s a documented liar, or a Nobel prize-winning economist? That’s the believability choice we have with the Republican tax cut plan. Oh, and there’s one more menacing voice: If the tax cuts fail, Wall Street tanks—that’s the warning from the treasury secretary who made millions on Wall Street.

The Washington Post’s fact-checker has certified that President Trump has made 1318 false and misleading claims, or statements, during his first 10 months in office. Trump’s most recent fabrication, too late for fact-checker’s list, was that he sent a fallen serviceman’s father a personal check for $25,000. The father denied receiving it. After reporters questioned the falsehood, Trump mailed the check.

Trump falsely accused former President Obama of failing to call Gold Star families. And he accuses NFL players of being unpatriotic for taking a knee, when he personally dodged the draft during the Vietnam War with five deferments. And remember, Trump has refused to release his tax returns, unlike every president and most presidential candidates since the practice began in the 1960s with George Romney, father of Mitt and governor of Michigan.

Paul Krugman is an academic economist who also writes a column for The New York Times. Krugman was awarded the Nobel Prize in 2008 for his seminal work on new trade theory and new economic geography. He is the author of numerous books. Krugman’s taught at Princeton and now at New York University.

The treasury secretary who’s peddling omens of stock market doom is Steven Mnuchin, who lately has been traveling with his new bride, the actress Laura Linton, at taxpayers’ expense. Mnuchin was another of the Goldman Sachs claque surrounding Trump, who bought a failing bank during the great recession, and made his millions by securing a government bailout and foreclosing on hapless mortgage holders.

Mnuchin’s profiteering on the mortgage crisis provided the cash for him to venture into producing movies. And Mnuchin’s concerned about the stock market going south. Well, the stock market’s America’s casino. The market reflects nothing but people feeling good enough to put up their money for the ride, just like a real casino.

Tax cuts are part of Republicans’ DNA. New-age Republicans stand for one thing, and one only—tax cuts. It’s their orthodoxy, their group cheer, and, they believe, their only salvation at the polls in 2018. They have nothing else to show for total control of the federal government and two-thirds of the state houses. Nonetheless, tax cuts moved a step closer when the Senate squeaked through the budget, 51-49, in a way that bypasses a procedural step and sets up the tax cut package for a simple majority vote by blocking a Democratic filibuster. There are 52 Republicans in the Senate. The budget, which goes to the House, would add $1.5 trillion to the deficit over 10 years another abdication of a Trump promise.

The Senate also voted to eliminate state and local tax deductions such as property taxes, a popular benefit used by 44 million Americans. The deduction has been in use since the income tax was instituted in 1913 and is a sticking point with legislators from high tax states, including Maryland. Put another way, those tax filers would surrender their local tax deduction to help fund tax breaks for the wealthy.

The Trump presidency is a continuous loop of failed attempts and unfulfilled promises. During his campaign, Trump promised, among other things that he’s unable to deliver, tax reform. That, to him, meant total change of the tax structure, closing loopholes and simplifying the tax form down to the size of a postcard.

Trump has stated, and repeated 14 times, according to fact-checker, that America is the highest taxed nation in the world. To the contrary, America’s tax burden is below average for developed counties and, in fact, ranks in the bottom third. Trump once again over-promised and is unable to deliver the pork chop. He has reduced his hyperbolic promise of reform to tax cuts. Trump’s style of governance is to disrupt and deflect.

Nobody is clamoring for a tax cut, least of all those—including GOP deficit hawks—who are worried about a tax cut contributing to the nation’s debt. In fact, many economists believe the nation is under-taxed for the services government delivers and where we’re headed. More than 70 percent of the budget pays for Social Security, Medicare and Medicaid and defense. The rest are the give-away baubles that you can see.

But a promise is a promise only if it’s kept. Otherwise it’s a lie, and you’d think Trump would be used to that by now. Here’s what Trump’s proposing: a cut in the individual top tax rate; a cut in corporate taxes; an end to the estate tax, which, incidentally, kicks in on estates at $5.5 million and above; create a loophole that allows wealthy individuals to act as small businesses and qualify for a preferential tax rate.

The shell game here is that most businesses don’t pay the top corporate tax rate of 35 percent They grease themselves through loopholes such as LLCs, wherein money comes in as profit and is paid out as dividends that are taxed at 16 percent—half the corporate tax rate. (By cutting the corporate tax rate, Trump would, in effect, be cutting his own tax bill. He has refused to put his business interests into a blind trust, as other presidents have.)

So, while Trump touts his plan as a boon to the middle class, fully 80 percent of the gains would go to the top one percent, while only 12 percent would benefit the middle class, according to Krugman. Krugman and most other economists concur that many middle-class workers could end up paying more in taxes to help finance the cuts for the rich. Trump’s proposed tax cuts could add as much as $24.5 trillion to the deficit over 20 years. House Speaker Paul Ryan says he’ll add a tax bracket to reduce the tilt to the wealthy.

If Trump’s tax plan reads as if it was written on Wall Street, it probably was. His top economic adviser, Gary Cohn, and his Treasury Secretary, Mnuchin, are both alums of Goldman Sachs. And here’s part of why Wall Street’s ticked off: the money that was supposed to pay for the tax cuts was the $700 million in subsidies that Trump promised to cut from the Affordable Care Act (Obamacare).

But that’s backfiring under pressure from the states. If those tax cuts are passed, they’ll be paid for by the sale of government bonds, further contributing to the debt and a strain on Wall Street. Krugman argues that the entire tax cut package is tied to campaign donations and he’s probably right. Wall Street spent $1.2 billion in contributions during the last election cycle, but the Street has been stingy with donations to Trump. Trump claims he wants to work with Democrats to pass the tax cuts. But Democrats are demanding a recalibration of the front-loaded cuts for the wealthy, which Trump refuses to yield.

The Republicans’, and Trump’s, sales point is that the benefits of the tax cuts will trickle down—you’ve heard that phrase before—to working stiffs by way of more jobs, more growth and more money in everyone’s paychecks. That theory has been disproven time and again. Businesses are loaded with cash they aren’t spending.

The GOP likes to cite President Ronald Reagan as the avatar of trickle-down economics. But it failed then, and it’ll fail again. Reagan is credited with lowering taxes to stimulate growth. Instead, Reagan’s tax cuts created the largest debt and deficit in the nation’s history. And forgotten by the GOP in the history lesson is that Reagan also raised taxes 11 times as president and as governor of California.

Trump is about to make the same mistake that Kansas did when it cut taxes dramatically to honor a pledge by Gov. Sam Brownback (R). As a result, the Kansas education system nearly collapsed for lack of funds, the state almost went bankrupt and its bonds were declared junk. Kansas, having learned the hard way, recently reinstated the taxes it cut. Trump has learned nothing.