Trump and Poor Rubio After the Show

Senator wonders if star will shake his hand. 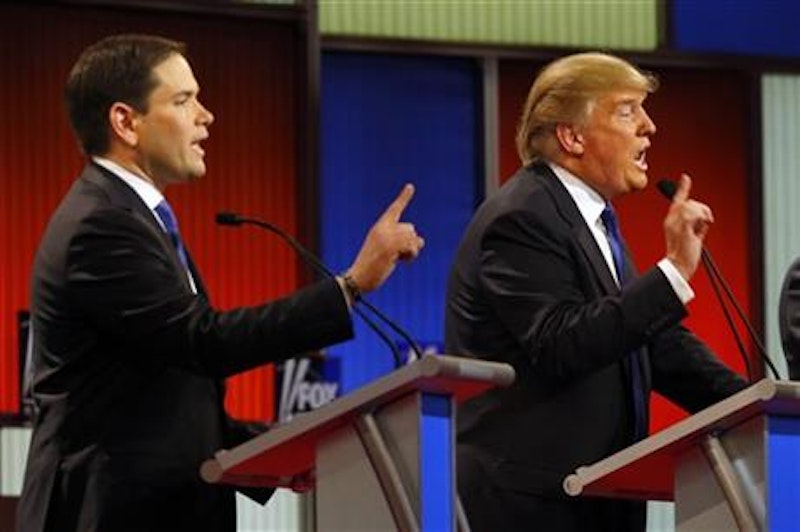 I just saw Marco Rubio try to shake Donald Trump’s hand and get turned down. Trump instead clipped Marco on the back with the Trump elbow. Not with the elbow’s point, I hasten to say. If I remember right (this was all a matter of seconds), Trump had his hand somewhere near his hip, and he swung his arm, elbow and all, briefly against Rubio’s back. It was like a pat delivered to the senator by an extension of the Trump torso. The move had a pleasantly big-brotherish feel, something graceful but bear-like. Rubio moved along, perhaps at a loss.

The Senator’s attempted handshake had been like a twitch, a slightly enlarged twitch. His hand had jumped out from his waist, but without force. Flicked from his waist. Rubio looked like he didn’t know what he was supposed to do: shake hands, not shake hands? Trump was going to tell Rubio whether a handshake would be okay.

This was right after the debate, when the show was done and the candidates came out from behind their podiums. During the show things had got personal, as they do among big-name Republicans nowadays. Trump told viewers he has a good dick size. “I guarantee you there is no problem,” he said. “I guarantee you.” Later he got confidential about Rubio, personality-wise. “I’ve gotten to know Marco over a period of time, believe me,” Trump said. “He is not a leader. Believe me.” On this point visual proof soon offered itself. Rubio emerged from his podium and floundered.

One remembers the water bottle, the helplessness with which Rubio sucked in water when he was supposed to be answering Barack Obama. The worst thing: Rubio’s eyes stayed cut to the camera; even as he guzzled, he couldn’t reclaim his face. If he kept looking at us, there was a chance he wasn’t blowing it. Once his eyes left us, he’d know he was doing wrong. Watching him, you saw psychic skull bones coming apart.

This man is not going to stop Donald Trump. Maybe he’ll fight on, but he won’t get anywhere. Rubio will be lucky if die-hard behavior now lands himself something lucrative later on, when he re-enters private life; the donor class might reward him for keeping their spirits up. Then again maybe he’ll break, be a Chris Christie. In July Rubio might be running a towel along the back of Trump’s neck, adjusting the air-conditioning. This would be at a classy Trump grotto while the Anus brainstorms his acceptance remarks.

After Trump’s elbow clip, Rubio looked like he had just been moved along by a celebrity who knows how to handle the public. John Kasich rescued him. The Governor, having shaken Trump’s hand, came up on Rubio’s other side. When I last saw the two, Kasich had initiated some sort of forearm-to-forearm bump with Rubio, like a fist bump but on a different scale. A frat kind of thing, I suppose, and kind of a joke on or variation of Trump’s elbow clip. Rubio joined in with Kasich right off; he looked grateful to act high-spirited.