It's one thing he can do to address criminal justice reform. 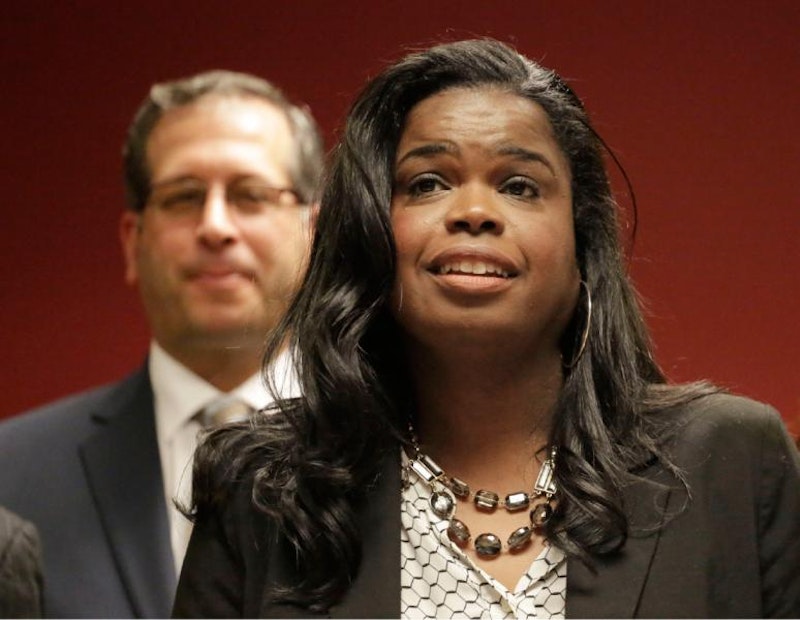 "Here's my promise," Bernie Sanders declared in a February debate. "At the end of my first term as President we will not have more people in jail than any other country."

It's an impressive claim. But the truth is, if Sanders wants to make a real change in criminal justice and imprisonment in this country, he doesn't need to wait till he's president. All he has to do is publicly endorse Kim Foxx for the March 15 Democratic primary in the race for District Attorney of Illinois' Cook County.

National politicians don't usually make local primary endorsements—not even in a jurisdiction as large as Cook County, which includes Chicago. But if you're looking at imprisonment in the United States, you need to take local steps. That's because only 13 percent of those incarcerated in the United States are in federal prison. The remainder of the 2.22 million people behind bars are locked up in state and local facilities. In other words, if Sanders were to pardon everyone over whom he has federal jurisdiction on the first day he took office, the U.S. would still have more people in prison than second-place China, which incarcerates "only" 1.66 million people.

But John Pfaff, a law professor at Fordham University, told me that creating jobs probably has little effect on imprisonment. The connection between unemployment and crime is tenuous. The connection between crime and prison is even more tenuous than that, since when employment does reduce crime, it tends to reduce property crimes like theft, and most people in prison are there for violent crimes. (And yes, that means changing drug laws won't do much to reduce prison populations either.) "Sanders' program could work," Pfaff said, "but it would take years to see an effect, the effect would be concentrated in property crimes, and the impact likely wouldn't significantly change prosecutors' ability to still charge a lot of felony cases every year."

Pfaff pointed out that Sanders could make a difference as president in some ways. One important step would be to provide funds for public defenders. States spend only about $2 billion, which is about one percent of total criminal justice spending. As a result, defenders are chronically underfunded, which results in bad plea deals, weak defenses, and excessive jail time for both innocent and guilty. If the federal government put together $4 billion in block grants, Pfaff said, it would triple the amount available for indigent defense. A robust defense is important for justice and fairness—and it would also keep prosecutors honest, and reduce the temptation to overcharge. And that, in turn, could over time reduce the prison population.

Of course, Sanders needs to get elected and get a funding bill through Congress. But he wouldn't need to do either of those things to endorse Kim Foxx for DA. Anita Alvarez, the current Cook County DA, is a disaster. She's notorious for taking a full year to indict the police officer who shot 17-year-old Laquan McDonald, even though she had access to a brutal and incriminating video tape. She also has a long history of refusing to prosecute police for wrongdoing. And she's intransigent on decarceration. Cook County Board President Toni Preckwinkle has tried to reduce jail populations, both to save money and as a matter of civil rights. Most stakeholders in the county have agreed to common sense methods to lower those waiting in lock-up—but Alvarez has refused to help. That's part of the reason Preckwinkle has backed Foxx, her former aide, to take on Alvarez in this year's primary election.

DA's have strong incentives to get long prison terms for defendants. If a defendant gets off, or gets out of prison, and commits a heinous crime, that can become major news, which can hurt the DA in the next election. On the other hand, if someone serves a few extra years in prison, that’s bad for the person, but it's unlikely to hurt the DA. This is the logic that’s pushed DA's to increase charges since the war on crime of the 1990s.  The incentives on DA's drive mass incarceration; if we want to change mass incarceration, we have to change the incentives.

That's happened a little with Black Lives Matter, and the greater awareness of police brutality issues over the last few years. Alvarez is notorious for her closeness to the police, and as a result she's faced political repercussions. Former political allies have abandoned her. Meanwhile, opponent Kim Foxx has racked up endorsements from a broad array of political figures in the state, from Preckwinkle, to Senator Dick Durbin, to former governor Pat Quinn.

Nonetheless , polls of the three-person race, including another challenger, Donna Moore, have been inconclusive. Alvarez's name is well known, and in local primary races without a national media blitz, it's hard to overturn even an incumbent as despised as Alvarez.

An endorsement from Sanders—or Hillary Clinton—would, in this context, be a huge deal. Presidential candidates command the media. If one of them gave a major speech on criminal justice issues endorsing Foxx, it would be a national story, and probably draw front-page headlines in Chicago. That's the sort of coverage that could make Foxx's name as well known as Alvarez's, right before the election. It could also generate a lot of donor money. It could turn the course of the race.

More, having a presidential candidate nationalize a DA election would put other DA's on notice. If a national party priority is to reduce incarceration, and Democratic DA's refuse to work towards that goal, then there should be consequences. Sure, in most cases, a presidential candidate, or a president, is not going to come after a local prosecutor. But politicians are timid creatures. The mere threat that it could happen would have a salutary effect on district attorneys everywhere.

Politicians usually don't endorse in local elections. They don't want to be seen to be lowering themselves. They don't want to lose prestige if their chosen candidate loses. And they don't want to irritate local actors who might disagree with them. Chicago Mayor Rahm Emanuel hasn't endorsed Alvarez, but any criticism of her automatically reflects on his own atrocious handling of the Laquan McDonald case.

So there are reasons for Sanders and Clinton not to mention Foxx. But if criminal justice reform is really a priority for Sanders or Clinton, then they should be willing to spend some capital to enact change. Until DA's are accountable, reducing prison populations is going to be a pipe dream. And if the Democratic Party can't hold Alvarez accountable, it might as well just give up the pretense of caring about criminal justice reform entirely.