A Confederacy of “Done With This”

These countries won’t last as they are. 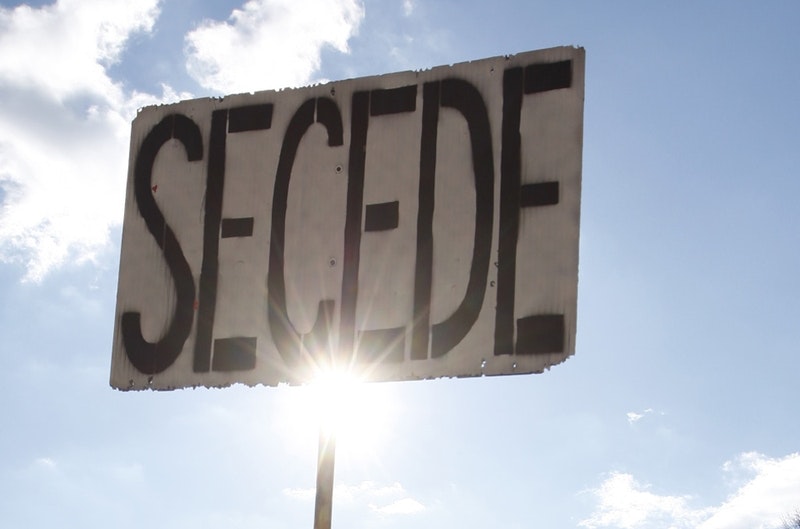 It’s time for all the States to secede from each other. I’m sorry, in a way, that Nancy Reagan had to spend her final days seeing the movement and the nation her husband ran fall into such disarray. As I’ve said before, it may be best to let all 50 states go their separate ways, abolishing the federal government altogether so that we don’t have to have these quadrennial arguments over who’s going to run the whole immense thing. But don’t get me wrong: Reagan had his share of scandals and disasters, too. (Many presidents, as this shocking video explains, were also known for their “upright knobbies.”)

Canada must be made ready for us. With so many U.S. citizens always mouthing off about how they’re going to move to Canada if they don’t get their way in a given election, perhaps it’s time we gave more serious thought to how all those expats could go about transforming Canada into the “better U.S.” that they wish it were. There are models for this sort of thing, such as the libertarian “Free State Project” aimed at transforming New Hampshire via libertarian migration to that state. Perhaps we need a #FreeCountry project designed to alter Canada.

My friend Jacob Levy is director of Montreal’s Yan P. Lin Centre for the Study of Freedom and Global Orders in the Ancient and Modern Worlds, which has a long name and so perhaps also a large office where people could crash during the early stages of the great migration (I haven’t thought through the details yet, nor mentioned the idea to Jacob).

Canada is not quite perfect as-is, we can all agree. It’s still the sort of place where “anti”-fascist protestors may physically attack a libertarian they don’t like, even pouring pee on a pretty one.

The U.S. is probably headed that P.C. direction, too, though. Left-liberal Peter Beinart whines about Donald Trump rallies inspiring violence because Trump’s a loudmouth and people disrupting the events are sometimes insulted by Trump and then ejected—though that’s in keeping with practice at most public events since time immemorial. If Beinart is even implicitly suggesting that offended people have a right to disrupt events and not get thrown out, he—and anyone in the establishment who thinks like him—is joining hands with the violent left-fringe to disrupt disapproved discourse, not fostering peace and dialogue. Trump seems to have the uncanny power to make both his fans and enemies lower their standards.

Beinart’s reasoning risks making us no better than those Canadian “anti”-fascist assailants—who no doubt do take some encouragement from Canada’s government stifling hate speech to a degree still unthinkable in the First Amendment-protected U.S. Perhaps a Canadian-born joint president of the U.S. and Canada who respects constitutional freedoms is really the only way to fix these neighboring hellholes, which is one more reason to root for Ted Cruz to get the Republican nomination.

(There’s also the fact that 226 years of conservatism can now either continue with Cruz or end with Trump. Those seem the only options on the table right now: a conservatism cautiously allied with populism, or else a newly-dominant populism unmoored from anything traditional, econ-savvy, or sane.)

While all that’s being resolved, if you see Beinart at an event, it’s probably wisest to ask him to leave preemptively before he starts making false “assault” claims. Remember, no one in America really has to tolerate his presence.

Norway’s vision of political Ragnarok can be seen in the swell TV series Okkupert. It depicts a Russian occupation—with EU backing—of Norway during an energy crisis that makes Norway’s oil too tempting to resist. What makes the whole scenario feel believable, though, is that the show is less about Russian invaders than about Green Party weenies trying to cope with the situation without creating so much as a bad public relations glitch. As eco-friendly public relations firms conquer the Earth, this may well be our future.

With the EU likely to disintegrate, the U.S. would simply be a bit ahead of the curve if we broke up, too. We’d be fashion-forward relative to Europe, always a source of pride when it happens. The EU is doing their breakup the hard way, of course, being torn apart by hostile migrants and deep disagreements about government spending. We should do the whole thing with some grace.