Trump Aides Hate Each Other

Vanity Fair takes a look at the White House nest of uglies. 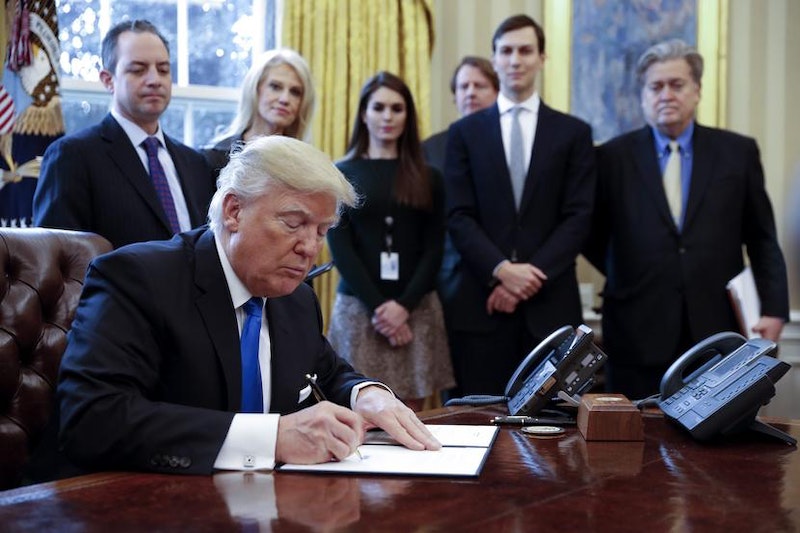 Check out the West Wing floorplan that Vanity Fair published with its new article about Donald Trump’s inner circle. The women and the Jews are upstairs. Kellyanne Conway, Ivanka Trump, Gary Cohn, and Stephen Miller have their offices a flight up from the main action. Not Steve Bannon, Reince Priebus, Sean Spicer, Jared Kushner, and Mike Pence—they have theirs on the same floor as the Oval Office. Admittedly, Kushner’s a Jew and he has the office that’s nearest to Trump’s. So that’s one. But otherwise the trend seems clear.

The article itself gives the state of play regarding White House gossip. Bottom line: there’s plenty. “Senior administration officials told me that both Bannon and Priebus partisans have spent hours on the phone with reporters, planting stories about each other and their colleagues,” Sarah Ellison writes. One “senior administration official” tells her that Trump brought along advisers who have “breathtaking personal agendas.” They’re willing to “malign the people around him,” the person says, and their basic principle is “We are going to do it our way and push through what we want whether it is right for him or not.”

In other words, the Trump White House is a nest of uglies, very talkative ones. Their allegiance to Trump is really more of a resemblance. He grabs, they grab. (One is reminded here of Omarosa Manigault’s alleged attempt to take the office of a West Wing colleague who was in New York. Supposedly she liked his view of the Washington Monument.) As the article tells it, when one of the uglies grabs too much, Trump lays him (or her) low. “Anyone who works for him and becomes victim to unfounded hubris will quickly be taken down to size,” the article quotes a Trump buddy. This may be “the best rule of thumb for survival” in the Trump orbit. But it’s one of the few quotes with a name attached, which inspires doubt. Also, a “West Wing official” tells the reporter that Trump doesn’t like to fire anyone. Melding these two claims, one pictures the big lump surrounded by disgruntled people who get snubbed by him but don’t go anywhere.

Steve Bannon, for instance. From the article: “Prior to his removal, Bannon had repeatedly threatened to quit the administration if he were ousted from the N.S.C., according to two people familiar with the matter.” Now look at him, still hanging about.

The Bannon episode seems clear enough. Much else is foggy, though the article pretends otherwise. For example, the “rule of thumb” is followed, as though to illustrate its truth, by a list of embattled White House officials. Bannon is third and last. First comes Mike Flynn, a victim of klutziness but not ambition. “Next up was Kellyanne Conway, who was effectively sidelined.” But later the piece discusses Kellyanne’s case in more detail, and there we learn that her sidelining is due to her impaired abilities on television. Now that administration policies have to be defended, as opposed to Hillary Clinton being attacked, Kellyanne’s moves don’t sparkle the way they used to. Anyway, that’s what the article says. Furthermore, the wording of the passage indicates that the decision to downgrade her came from Trump’s aides, not the man himself. There is this, though: “Conway’s repeated cooperation with magazine profiles has raised suspicions about whom she is really out for.” Unattributed, but it’s something.

The article’s headline is a horrifying stretch. “The Inside Story of the Kushner-Bannon Civil War”? Here’s the material on that: “While Bannon and Kushner got along well during the campaign, Bannon seems to have felt betrayed by Kushner and has retaliated by planting negative stories about him. Kushner sees Bannon as an ideologue whose approach has stymied the president’s effectiveness.” There, that’s the whole thing. But, sketchiness aside, the article does have some good bits:

“I’m not a fucking speechwriter. I am a real-estate guy.” That’s what Jared is supposed to have said after candidate Trump didn’t like a speech the boy had written. Kushner didn’t say this to Trump, just to somebody. Later the real-estate guy had to find an economic adviser for the campaign. Allegedly he browsed Amazon and then hired the author of a book with a cool title, Death by China.

“Don’t spend too much time on Kellyanne,” says somebody unnamed. “She’s a harmless, sweet person, but she is less and less in the middle of it.” This is fun, but not entirely plausible. Kellyanne, according to an eyewitness account, punched a man in the face at Trump’s inaugural ball. But okay, she’s Bambi.

Flies buzz about the West Wing’s ceilings because the windows don’t open. No doubt they were there for Barack Obama too. But now there’s an administration that can make them feel at home.