Adam Sandler’s New Film Is Weird Evidence of His Republicanism

The former SNL star is loyal to a fault. 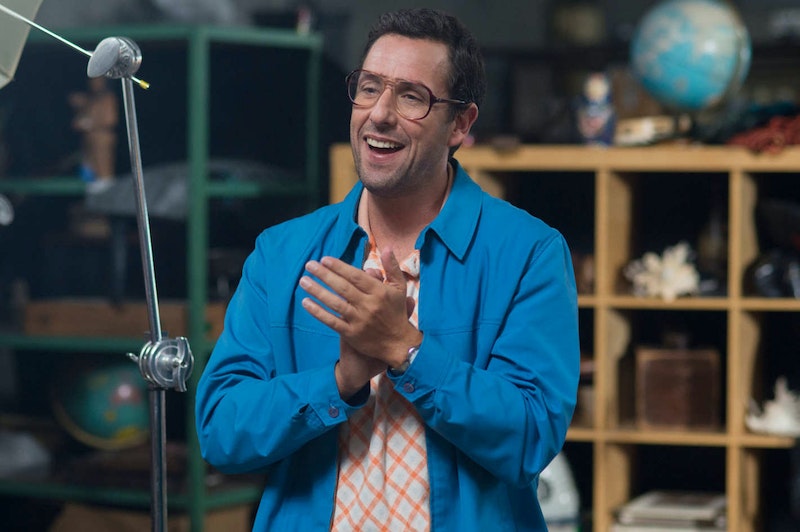 Sandy Wexler, Adam Sandler’s newest foray into amusing mediocrity and supposed tribute to a real-life producer friend, is getting grudging credit from the critics. Why? Because it’s only half-bad. Which means it’s also not half bad. And that’s almost shocking. It’s no Punch-Drunk Love, but nor is it Jack & Jill. If Adam Sandler is Tyler Perry for white people, then Sandy Wexler is the SNL alum’s Netflix-era "I Can Do Bad All By Myself."

“Inspired by Sandler’s longtime manager, ‘Sandy Wexler’ argues that loyalty is more important than petty concerns like ‘fame’ or ‘respect,’” observes David Ehrlich at IndieWire, “and the star’s body of work bears that out as a genuine personal ethos.”

Ehrlich makes a convincing case that Sandler is something akin to the leader of a lollipop guild for “mildly talented comedians,” and is serious about rewarding his quasi-comedic compatriots. There’s a reason he jam-packs every film with every one of his buddies (and the occasional budette). Nick Swardson, Allen Covert, David Spade, Rob Schneider, Terry Crews. You’ll find them all in Wexler.

“Loyal to a fault, he looks after the people he loves, and he cares about them a hell of a lot more than he does any of the films they make together,” adds Ehrlich. “It’s not his problem that Netflix invented a business model that privileges casual viewing and then paid him a fortune to exploit it.” Sandler is a little more than halfway through a lucrative four-movie deal with the streaming service giant signed in 2014.

The Billy Madison star is a well-known Republican (albeit more of a "South Park Republican"). Perhaps less well-known is that Republicans harbor the opposite of what conservative pundit Steve Sailer calls "leapfrogging loyalties." Members of the red tribe are more often allegiant to those in their immediate vicinity: aunts, uncles, sisters and, in Sandler’s case, a wacky band of brothers. Unlike doctrinaire progressives, and to a certain extent business-friendly centrists loyal to meritocracy, conservatives don’t easily shine to a far away other (say, Muslims). “Far away” here need not suggest geographic distance. Numerically tiny groups—say, the trans community—with members in suburban cul-de-sacs throughout the Midwest are unlikely to elicit much enthusiasm from Republicans because they learned about them in a sociology class. They’d have to actually know one. (How much Caitlyn Jenner confounds all this, I’m unsure.)

“The biggest and most consistent partisan differences involve loyalty, authority and sanctity,” wrote former Obama “regulatory czar” Cass Sunstein in a 2015 Bloomberg piece drawing on the work of social psychologist Jonathan Haidt, who’s done much to elucidate the differing moral profiles of liberals and conservatives. “The difference even maps onto preferences for dog breeds; conservatives are especially likely to want dogs that are loyal and obedient.”

With this in mind, the current POTUS can be viewed as a pretty hardcore Republican, despite the “RINO” accusation often hurled his way. Sure, he may care little about pro-life politics, but he cares very much about rewarding allies and punishing enemies. Just ask Don King, a man who’s no foreign policy guru but whose commitment to a buddy is enough to attempt mimicking one. For those high on loyalty, merit be damned.

“But what about Clint Eastwood?” one might retort. “He’s Republican and makes first rate movies.” To this I can only respond that if Sandler is an undeniable and unashamed South Park Republican, Eastwood is best thought of as an Arlington Cemetery Republican.