In abundance, as The Washington Post proves, the concept loses all meaning. 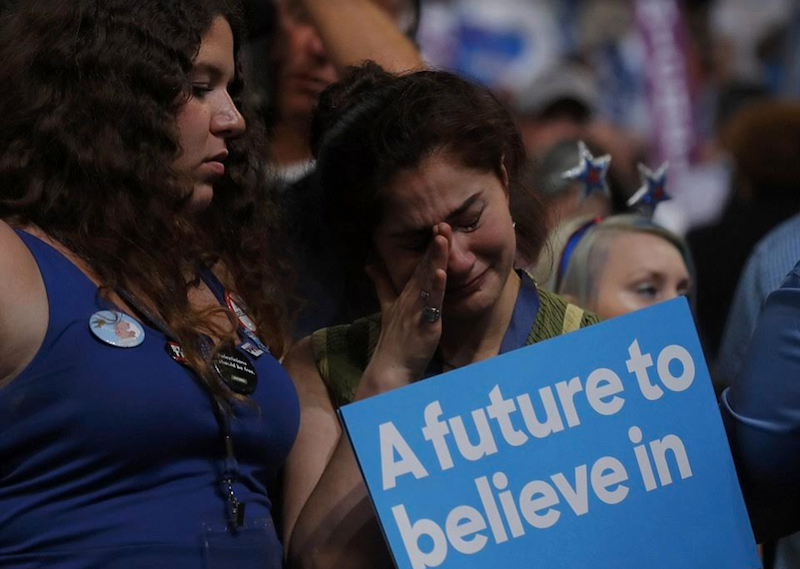 It’s been nearly six months since Trump won the election, and when you’re not buried in the day-to-day developments, the simple reality of Donald Trump: President of the United States snaps back into perfect focus and the room gets heavy. Psychic aftershocks still come in waves; every day is a winding road. Nuclear war with North Korea? Ground troops in Syria? Bannon on the ropes? Mike Cernovich threatening to release “everything” (“If Bannon is removed, there are gonna be divorces, because I know about the mistresses, the sugar babies, the drugs, the pill popping, the orgies”)? That’s the past two weeks. I’m excited that the first round of post-election books are starting to come out—an escape, and helpful, because it’s still so hard to process. The world will be reading about that night for decades. A seal was broken—no one died, but so much changed that night in the American psyche.

Or snapped into focus. The book getting the most attention is Shattered: Inside Hillary Clinton’s Doomed Campaign by reporters Jonathan Allen and Amie Parnes. I got it on Monday, and the book is thick—of course I skipped right to the end to read all the election night horror, around nine p.m. when the fear started, and what it was like in the Clintons’ Peninsula suite in Midtown Manhattan. I don’t expect much, they’re clearly Clintonites (John Podesta is introduced as a “marathon runner” and Hillary as a “modest, Midwestern methodist”), but even if it’s Heilemann & Halperin level horse race stuff, the story is so thrilling, it’s hard to derail.

But people focus on the trees because the four-year forest is too daunting and horrifying to contemplate at length. So yesterday’s bit was about the hypocrisy of Trump’s old tweets. You’ve seen this before, and it’s true, there’s an example for almost everything Trump does that he negged on Twitter three or four years ago, but it’s just another mind-bender maraschino cherry in the sundae mess of the whole thing. Throw the wack Super Bowl results and the Oscars flub in there too—hell, throw in the audio cutting out during Radiohead’s set at Coachella. The Washington Post published a compendium of hypocritical Trump tweets yesterday: “Each of these actions runs completely counter to the views and values once espoused by Trump on Twitter. And they join an amazingly long—and growing—list of old Trump tweets that have become eerily applicable to Trump's own presidency in ways that scream ‘hypocrisy.'" Who cares? None of this matters. There’s too much to go through, it’s all too mind-bending. “Hypocrisy” is meaningless and ineffective as a political weapon or liability now. But the Post goes on to list a variety of flip-flops and old tweets that directly contradict his actions as President. Yes, he said going into Syria would be “bad” in 2013. He encouraged Michael Flynn to seek immunity despite all that “Lock her up!” baloney last year. Another stinger from another Trump article: “If policies were gender identities, Trump wouldn’t know which bathroom to use.” Zing! Boom! Bacon! You just won the Internet, good sir. Hold my beer.